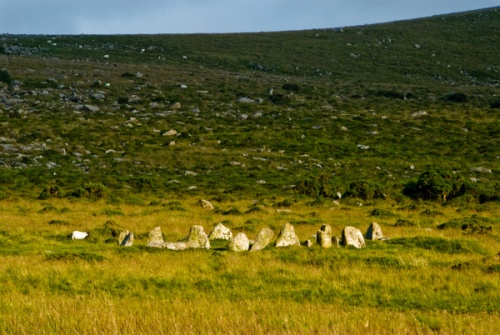 Belstone is an attractive village on the northern fringe of Dartmoor National Park. Clustered under the shadow of Belstone Tor just outside the village is a stone circle with a Bronze Age cist - a stone-lined burial chamber known as a kistvaen on Dartmoor - at its centre.

The circle is marked on Ordnance Survey maps as the Nine Stones, but it is more commonly known as the Nine Maidens, or sometimes as the Seventeen Brothers.

With a name like 'Nine Maidens', you might assume that there are nine standing stones in the circle, but you'd be wrong. There are generally acknowledged to be 16 stones, though that number jumps to 20 or more if you include several small fallen stones that may or may not have formed part of the original circle. 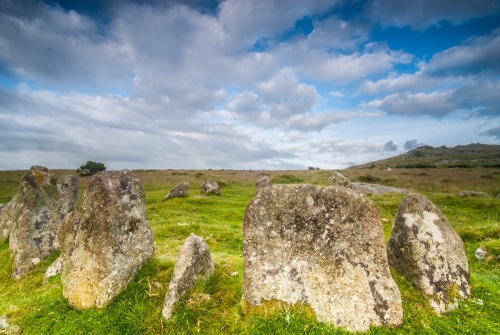 Looking east across the stone circle

The stone circle may, in fact, be a cairn circle or kerb cairn; that is, a burial cairn with upright stones defining its boundaries. Of the sixteen visible stones, two are lying almost flat, one is buried and one has been taken down and now lies outside the circle.

Most of the stones measure between 0.5m and 0.8m (1.6 to 2.6 feet) but one of the fallen stones is much larger at 1.75m (5.75 feet). The internal diameter of the circle is roughly 7m (23 feet). It seems likely that the burial cairn in the centre of the circle once rose at least as high as the tallest standing stone.

The stones are said to dance at noon each day (they remained immovable when I was there). Another version says that the stones come alive and dance every Hunter's Moon (the full moon in October). 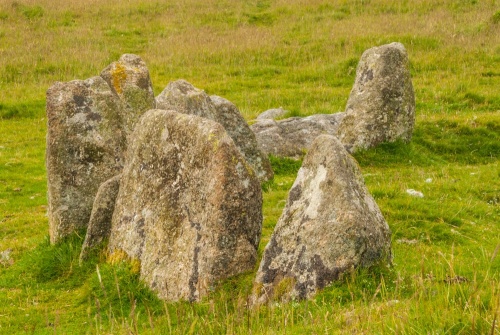 The east side of the stone circle

Yet another story says that the stones were a group of maidens who dared to dance on the Sabbath and were instantly turned to stone for their punishment. They were fated to dance at noon each day until the end of time.

A twist on this tale says that the stones can be brought to life by the sound of the bells of Belstone church. It is said that if you try to count the stones you will always come up with a different total because the stones won't stand still long enough to be counted.

A local story says that anyone who disturbs the stones will suffer grave misfortune. Perhaps that is what occurred in 1985 when a local film company added an extra stone during the filming of a horror film called 'The Circle of Doom'. Their misfortune was that the only copy of the film was lost in the post

Many of these myths are similar to stories told in other areas of the country to explain ancient sites. The idea that maidens (or anyone else) could be turned to stone for breaking the Sabbath is also related to other stone circles, as is the story that if you try to count the stones you will always get a different number.

Curiously, there are also other stone circles with the number Nine in their names that have more than nine stones. It seems that number nine had a cultural significance in different areas of the country and was used whatever the actual number of stones. 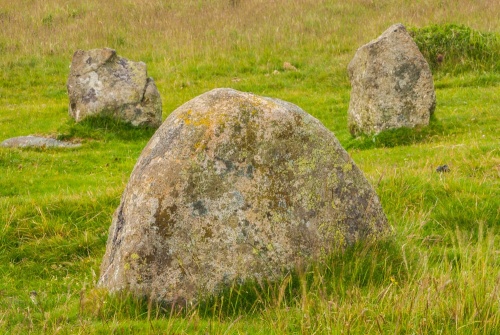 A rounded stone on the north side of the circle

There is a car park at the eastern edge of Belstone village. Walk through the village and take the road that forks left towards Watchet Hill. You are now following the long-distance Tarka Trail. Follow the signposted trail onto the moor and head for an army flagpole to the south. At the pole turn west following the obvious grassy trail which leads you straight to the stone circle.

The Nine Maidens are set in a wonderfully scenic location on the edge of the moors. It is well worth the short walk from Belstone village.