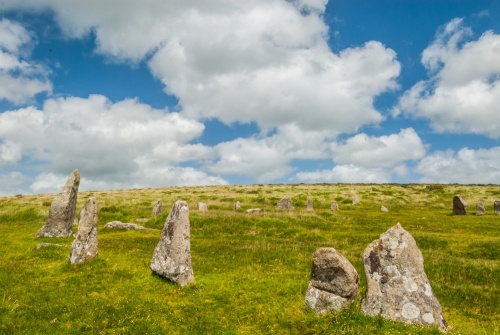 Scorhill Stone Circle, near the hamlet of Gidleigh, has been called Dartmoor's finest stone circle, a bold claim considering the remarkable number of prehistoric monuments on Dartmoor.

Some of that praise is down to the fact that Scorhill was spared the attention of Victorian 'restorers', meaning that it is relatively original, despite having had several stones removed and others damaged over the years.

The stone circle stands near the confluence of the North Teign River with its tributary the Wallabrook. The circle is 26.8m (88 feet) across. There are 34 stones remaining, 23 standing and 11 fallen, though these only account for a portion of the circle.

It is estimated that there would have originally been 65-70 stones needed to complete the circle. Some stones were taken away to repair the Gidleigh leat, or drainage channel. Other stones show marks left by stone cutters. 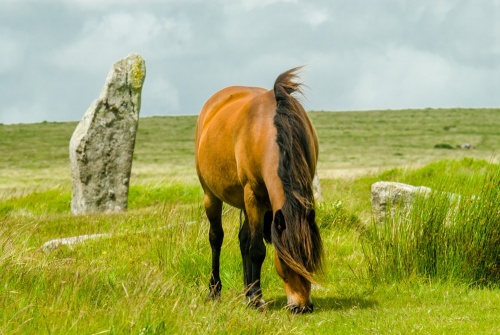 A Dartmoor pony grazing at Scorhill

Interestingly, the stones are not spaced evenly. The largest stone is 2.5m (8.1 feet) and there is a very tall and wide (1.8m x 1.5m) stone fallen over in the SSW of the circle.

The circle dates to the Bronze Age (roughly 3200–600 BC) and is part of an ancient landscape on the moor that includes six hut circles, three cairns and a 'reave' or field boundary of earth and rubble. Leading away towards the south is a double stone row, now almost completely buried beneath the turf.

A short walk south on Scorhill Down leads to the Teign-e-ver clapper bridge over the North Teign River, and near the bridge is the striking Tolmen Stone, a large boulder like a doughnut with a hole bored through it, said to be a focus for fertility rituals and healing ceremonies. 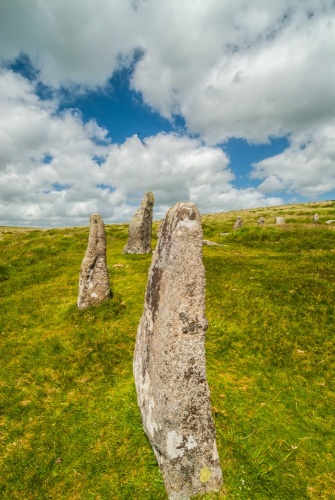 Looking along the circle

Did the stone circle have an astronomical purpose? On Midsummer Eve the sun sets behind the tallest standing stone at Scorhill. Coincidence or intentional alignment?

Flint artefacts found on Gidleigh Moor and now in the Torquay Museum show that the moor has seen human activity as far back as the Mesolithic period (8,500-4,000 BC).

Local folklore suggests that it was also the focus for a different kind of ritual; women who had been unfaithful had to wash in Cranmere Pool then run around Scorhill Stone Circle three times, then pass through the Tolmen Stone before kneeling to pray by the stones for forgiveness.

Those who were refused forgiveness were crushed by falling stones, which is why you see so many fallen stones today. Another version of the story says that the faithless woman had to make her way to Grey Wethers Stone Circle for her final task. 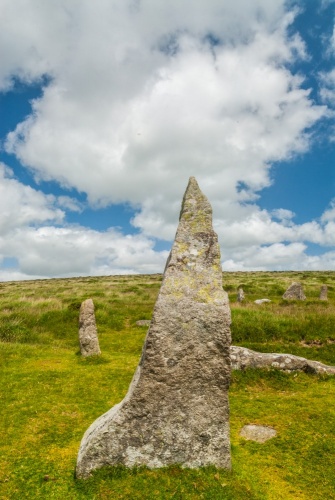 Another local legend says that the stone circle was once the home of a ferocious ogre who would kill and eat any sheep that strayed too close to his home.

Two cart tracks lead through the circle, though according to legend horses will refuse to pass through the stones.

Horses may refuse, but Dartmoor ponies don't! On my last visit to Scorhill, I found a herd of ponies grazing happily amongst the stones and using them for scratching posts.

The simplest way to reach Scorhill Stone Circle is to park at Scorhill Farm, at the end of a lane heading south-west from Gidleigh. There is a small parking area near the farm. From there you take the footpath that leads south-west from the end of the road. Take the first fork left then the second fork right. The trail leads directly across Scorhill Down to the stone circle.

From the circle, it is well worth a short walk south to the Teign-e-ver clapper bridge and the Tolmen Stone, on the north bank of the river.