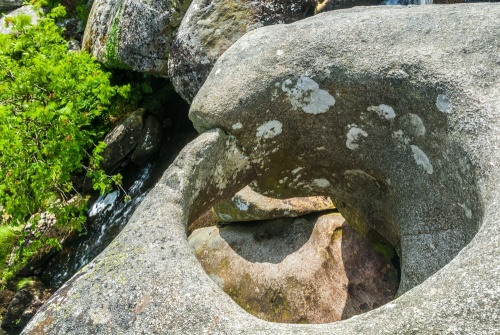 On the north bank of the North Teign River, in the heart of one of Dartmoor's most remarkable prehistoric landscapes, is a large boulder known as the Tolmen Stone. Over thousands of years the river has bored a perfectly circular hole through the stone so that it resembles a gigantic doughnut. Water has also worn three small basins on the rock surface.

The hole measures just over 1m across (3.3 feet), large enough for an ordinary adult to pass through. 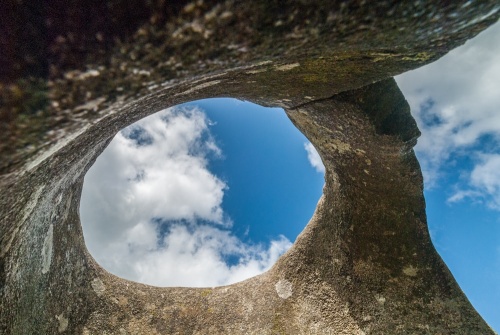 The hole from beneath

The Tolmen Stone is said to have healing properties, and played a part in several traditional healing rituals.

Holed stones were also used as a place for courting couples to pledge their vows. Part of the ceremony involved the couple holding hands through the hole. 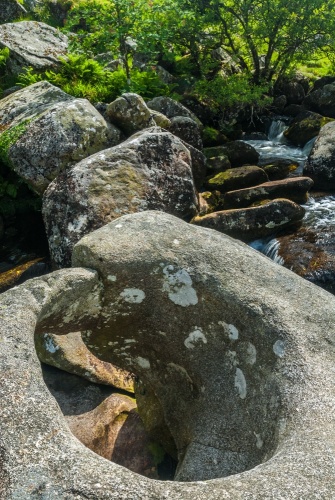 The Tolmen Stone from above

Another rather unusual tale links the Tolmen stone to a rite of atonement for unfaithful wives. According to this tradition, wives suspected of being unfaithful had to wash in Cranmere Pool, run three times around Scorhill Stone Circle, pass through the Tolmen Stone, and then kneel in prayer at Grey Wethers Stone Circles to ask for forgiveness.

If their pleas were rebuked a standing stone would fall on them and crush them (which helps account for standing stones that have fallen). It sounds highly unlikely that such a ritual ever took place, but there are stranger tales on Dartmoor that may have their roots in real events.

Similar traditions of healing are linked to another holed stone at Men-an-Tol in Cornwall. 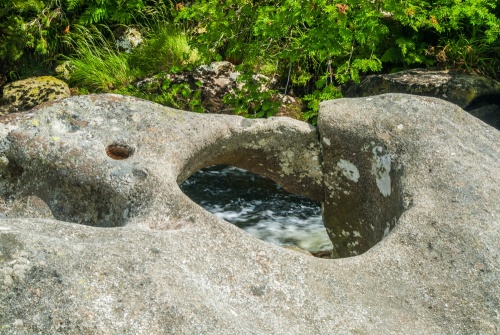 Climbing up the stone

Be aware that if the river level is high it won't be possible to pass through the hole in the stone - unless you don't mind getting extremely wet!

So, the burning question no doubt every reader is asking themselves is did I go through the hole in the Tolmen Stone?

Going through the hole is not difficult, just a bit awkward, especially if you try to take a large camera with you to take photos from underneath the hole as I did.

The Tolmen Stone is just east of the ancient clapper bridge of Teign-e-Ver and a short walk south of Scorhill Stone Circle. 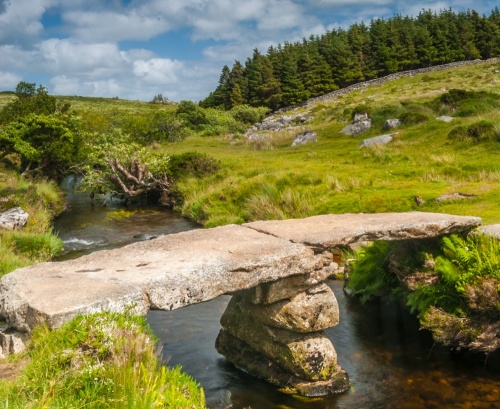 The nearby Teign-e-Ver Clapper Bridge

The easiest way to reach the Tolmen Stone is to combine it with a visit to Scorhill Stone Circle. There is a small parking area at Scorhill Farm, just west o Gidleigh. From there a trail leads south-west onto the moor. You pass the stone circle after about 700m. Just carry on south past the stone circle and you will reach the clapper bridge across the North Teign known as Teign-e-Ver.

Follow the river bank east towards a stand of trees and you will see the Tolmen Stone above the river. There is no sign, but it is very easy to spot the stone. From the parking ara to the stone is roughly 1km (about 0.6 miles). Do wear good waterproof footwear, as the moor can be boggy in places. A good OS map (OL28 Explorer) is helpful.