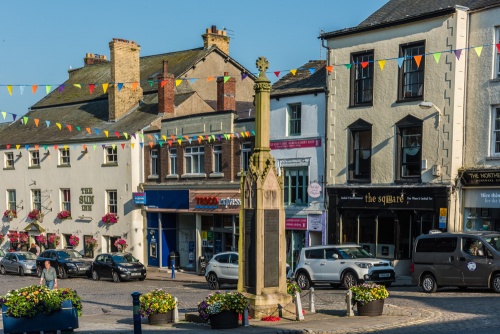 Ulverston is an attractive market town located on the eastern side of the Furness peninsula. The town has its roots in the Saxon period and was recorded in the Domesday Book of 1086 as Ulvreston.

The name comes from the Norse family name Ulfarr, meaning 'wolf warrior', and 'tun', meaning a farm or settlement. The original meaning of the name is remembered by a wolf on the town crest.

In 1280 Edward I granted Ulverston a market charter, an event remembered each year with the Charter Festival. The king was on an official visit to Carlisle when he granted Ulverston the right to hold a weekly market and an annual fair.

The prosperity that came from the markets and the fair helped Ulverston survive several attacks by Scottish raiders during the 14th century when the town was burned to the ground twice. 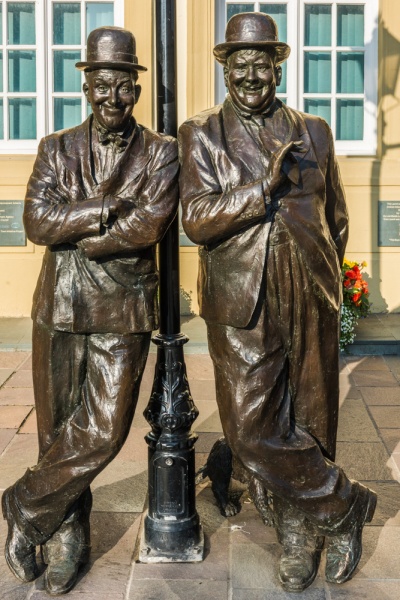 When Henry VIII suppressed Furness Abbey near Dalton-in-Furness, Ulverston became the administrative centre of the Furness region and Dalton faded in importance. Ulverston benefitted from being on the main trade route linking Furness to the Cartmel peninsula across Cartmel Sands.

Today the centre of Ulverston maintains its historical appeal, with a large number of attractive older buildings spread out along cobbled streets leading to the market place.

On the top of Hoad Hill, northeast of Ulverston, is a striking 100 foot high memorial to Sir John Barrow. The monument, erected by public subscription in 1864, commemorates the life of Barrow, a native of Ulverston. Barrow was a founder member of the Royal Geographic Society before serving as Second Secretary to the Admiralty. The tower, built to resemble a lighthouse, is hollow inside, and visitors can climb 112 steps to the top for panoramic views of the surrounding countryside.

More about the Hoad Monument >> 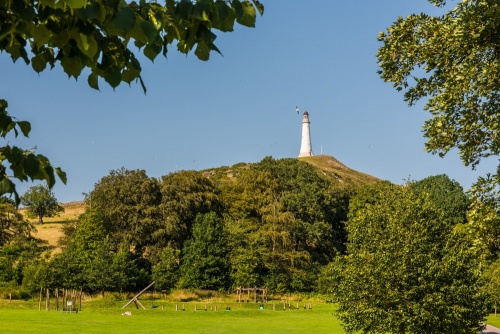 The Hoad Monument from Ford Park

A few miles from Ulverston is this 16th-century manor house, built by George Fell in 1568. Fell's son Thomas married Margaret Askew, and as Margaret Fell she played a major role in founding the Society of Friends (the Quakers).

George Fox visited the Fells at Swarthmoor in 1652 and preached from the first-floor balcony. Quakers met at the Hall until 1691 when a meeting house was built nearby. The Hall now belongs to the Society of Friends and is open to visitors. 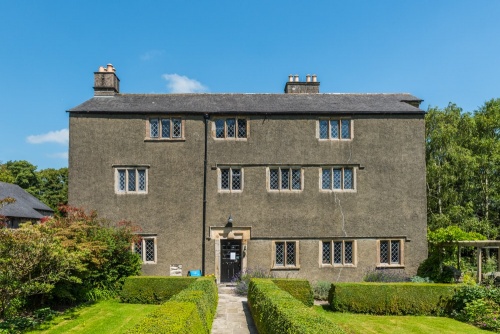 Comedian Stan Laurel was born in Ulverston in 1890. The world's only museum dedicated to Laurel and his comic partner, Oliver Hardy, stands on Brogden Street in Ulverston. The huge collection of memorabilia includes personal letters, items of furniture, photos, documents, and of course, films starring Laurel and Hardy.

More about the Laurel and Hardy Museum >>

A statue of Laurel and Hardy stands in front of Coronation Hall on County Road. The Hall was built to commemorate the coronation of George V and houses over 600 guests for theatrical performances, making it the largest public hall in the South Lakeland region. It is now home to the Ulverston Town Council. 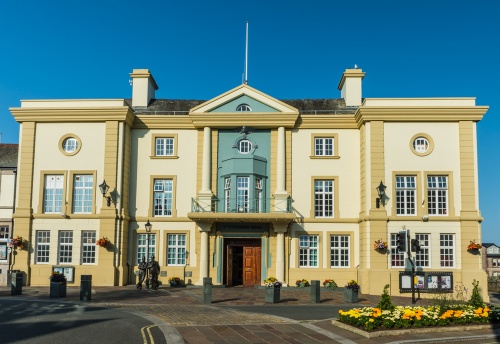 The 16th-century church was completely rebuilt in 1864, with only the Tudor tower preserved. Highlights include original medieval stained glass and a Norman doorway with traditional zigzag moulding. The oldest monument is to William Sandys, who died in 1559. 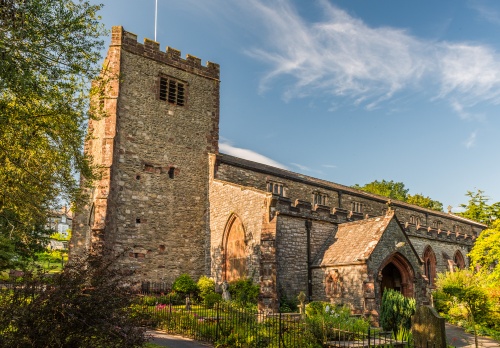 Outside Ulverston is Conishead Priory, founded in 1160 as a hospital for the poor. The medieval priory was dissolved at the Reformation, and the site used to build a country house. That house was rebuilt in the 19th century as a Victorian Gothic mansion, featuring superb stained glass and a vaulted great hall.

The Victorian house has been called one of the finest examples of Victorian Gothic architecture in the north of England. The Priory is now a Buddhist study centre but is regularly open to visitors.

The sport of pole vaulting was born in Ulverston. Using a long pole to vault over a bar was invented in 1843 at the Ulverston Football and Cricket Club.

In 1795 the Scottish engineer and architect John Rennie built a canal linking Ulverston to Morecambe Bay and the Cartmel Sands at Canal Foot. Rennie designed several major canal projects around Britain including the Kennet & Avon Canal and the Royal Military Canal, and also designed major bridges including London Bridge, Southwark Bridge, and Waterloo Bridge, all in London.

The Ulverston Canal made the inland town into a seaport, with links through Morecambe Bay to the Irish Sea. A thriving maritime trade developed, with ships transporting copper slate and linen across the globe and passengers steamers linking Ulverston to Liverpool, Scotland, and London. At 1.25 miles it is the shortest canal in the UK, as well as being the widest and deepest.

The canal brought a period of prosperity to Ulverston, but the arrival of the railway in 1846 saw it gradually decrease in importance. The canal was finally abandoned after WWII, but you can enjoy canalside walks stretching from Canal Street (the A590) to Canal Foot, about 3 miles away (5km). 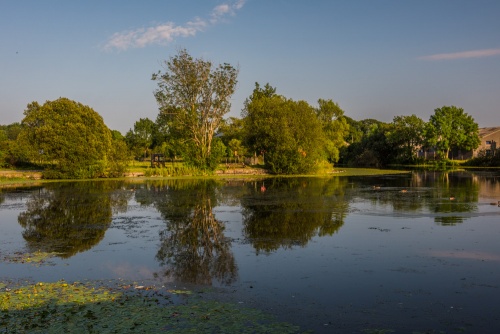 The Cumbria Way long-distance footpath begins (or ends!) in Ulverston. The Cumbria Way stretches for 74 miles through the glorious scenery of the Lake District National Park to the county town of Carlisle. The official terminus of the footpath is a striking metal sculpture known as the 'Cairn and Compass', designed by Chris Brammell.

The sculpture stands at the western end of The Gill car park in Ulverston. The Cumbria Way route was laid out by volunteers from the Ramblers' Association in the 1970s and opened in 2007. 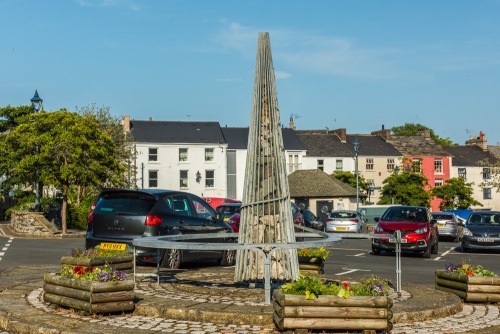 Cairn and Compass - the start of the Cumbria Way

This delightful public park is based around a 19th-century mansion, the former home of the Ainslie family of Grizedale. The park is a wonderful mix of wide lawns, woodland walks, an orchard and a wildflower meadow, all overlooked by the Hoad Monument.

At the centre of the Park is the restored Victorian mansion of Ford House. In 1857 a wealthy landowner named Montague Ainslie built Ford House in Ulverston for his son William G Ainslie, the Chairman of the North Lonsdale Iron and Steel Company in South Ulverston. When WG Ainslie moved to London the house was used by the Ainslie family as a town residence before it was leased and then sold to a succession of private owners.

In the early 1930s the estate passed to the Ulverston Urban District Council (perhaps as a gift, the historical records are unclear). The estate was used as an American military base during WWII. The historic 19th-century house was then used as a school. The house was then left to decay until it was rescued by the Ford Park Community Group.

On 19 June 1746, John Barrow was born in a small whitewashed cottage on Dragley Beck in Ulverston. His father was a simple yeoman farmer. He was educated at the Town Bank Grammar School in Ulverston but rose to become a world-famous explorer and a founder member of the Royal Geographical Society. He is most famous for his voyages trying to discover the North-West Passage to the Far East. In his post as Second Secretary to the Admiralty, Barrow helped launch voyages of exploration to every corner of the known world.

Barrow's birthplace cottage (also known as Rake Lane House and Dragley Beck Cottage) has been restored by the Town Council and is now open to the public (though opening hours are limited). The cottage stands at the corner of Dragley Beck (the A5087) and Rake Lane. It was built in the 17th century and originally had a thatched roof though that was later replaced by slate tiles.

Over the fireplace is a marble plaque reading,

'In this humble cottage, the best memorial of his enterprising spirit, industry and perseverance, was born on the 19th June 1764, Sir John Barrow, Baronet, L.L.D., F.R.S., who accompanied Lord Macartney's Embassy to China; who travelled far into the interior of Africa, and who was for forty years (embracing the whole period of the last war), Secretary of the Admiralty. He died in London on the 23rd November 1848, in the 85th year of his age. Remarkable for the vigour of his mind, as his latter works abundantly testify, and scarcely less remarkable for the activity of his body. SOLI DEO GLORIA.' 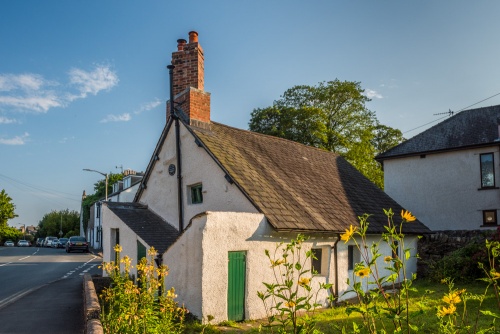 A few miles south of Ulverston is Gleaston Mill, a restored watermill erected in 1774 on a site where there has been milling since the 11th century. Highlights include an impressive 18-foot waterwheel, restored milling machinery, and a fascinating display of rural crafts and local history. The oldest part of the mill is the Fire Hole, a 13th-century kiln for drying grain.

A short stroll from the watermill is Gleaston Castle, a ruined 14th-century castle built by Sir John de Hartington, the Lord of the Manor of Muchland. Though the castle is on private land, the lane and a nearby footpath pass directly beside it and you can easily enjoy the roofless remains.

Ulverston is a delight to explore. The historic core of the old town is full of Grade II listed buildings - there are a remarkable 149 listed buildings in the town as a whole, including five listed Grade II*. On King Street is the Rose and Crown pub, built in the 17th century, while on the south side of Market Street is the Sun Hotel, built in the 18th century with Victorian additions. Also from the 18th century is the Braddylls Arms on the north side of the Market Place. 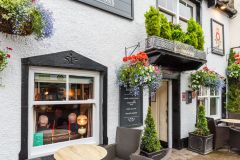 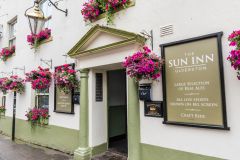 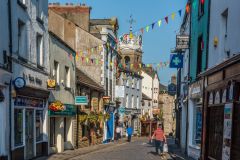 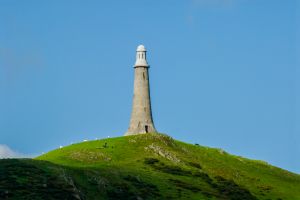 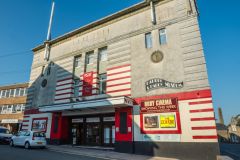 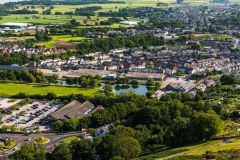 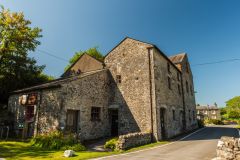 More self catering near Ulverston >>

More bed and breakfasts near Ulverston >>