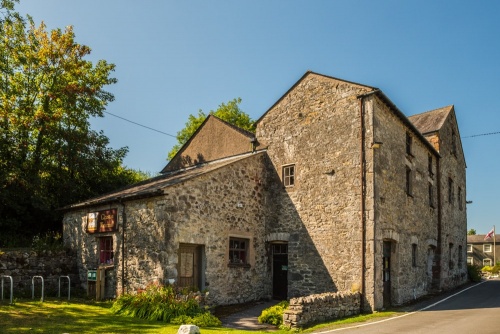 In a quiet rural valley south of Ulverston stands Gleaston Mill, a restored watermill dating to 1774. The mill still has its original wooden gear mechanism. See the impressive 18-foot waterwheel, milling machinery, and a wonderful display of rural crafts and local history. A short stroll from the mill stands the remains of medieval Gleaston Castle, owned by the Lord of the Manor of Muchland.

Though the mill we see today dates to the 18th century there is evidence of milling activity here since the 11th century. The first watermill was built in the early 14th century, around the same time as the castle, which we know was erected by John de Harrington. The leat that feeds the mill runs through the castle grounds, strongly suggesting that the John de Harrington built Gleaston Mill as a manorial mill. 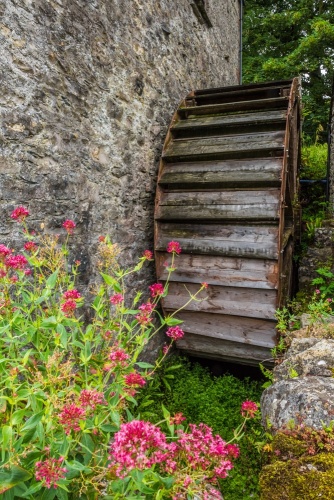 The mill stream was fed by a stream flowing out of Urswick Tarn. The Tarn does not hold enough water to make milling possible through the summer months, so the mill could only run when the autumn rain started in September and raised the water level.

The medieval mill was rebuilt in its present form 1774. It stands three storeys high and is partly built of sandstone taken from the ruin of nearby Furness Abbey. To ensure a supply of water throughout the year a second leat was built, connecting to a spring near the castle. A set of French burr grinding stones was installed so that the mill could grind both wheat and oats.

The name of the miller at the time of the rebuild is unknown, but we do know that the Thexton family were tenants throughout most of the 19th century. The Thexton family, including 13 children, lived in the cottage beside the mill building. The youngest Thexton child, aged two, died tragically by drowning in the leat. 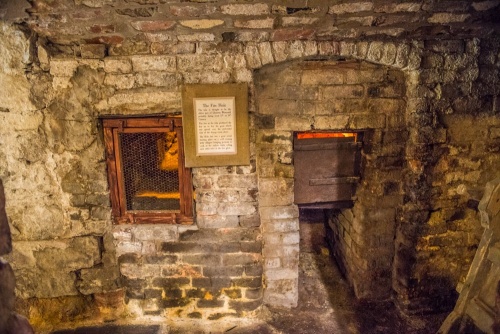 The medieval kiln, or 'Fire Hole'

The Thextons were replaced by the Huartsons and then by the Edmondson family. They continued milling into the 1920s, by which time water-powered mills were no longer commercially viable.

But all was not lost, for Gleaston Mill had a drying kiln, where grain was dried before being milled. Local farmers continued to bring oats to the mill to be dried before being ground elsewhere. The mill kept producing animal feed until 1948 before it fell into disuse and the top floor was used to keep racing pigeons.

In 1987 Mike and Vicky Brereton bought Gleaston Mill and began the long, slow (and expensive_ process of restoring it. The Breretons run the adjoining Pig's Whisper Country Store and Dusty Miller's teashop.

A visit to the mill starts with a short video of the mill's history, archaeological finds and its connection to Gleaston Castle. There is a display of rural life including agricultural tools and a fascinating look at how the mill welcomed displaced children during WWII. 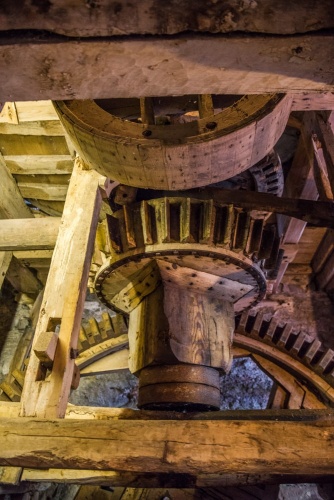 The oldest part of the mill is the Fire Hole, a kiln dating to the 13th or 14th century. The kiln provided hot air to dry grain on the drying room floor above. Grain was spread out on the perforated tiles and dried until it was in a fit state to be ground. The kiln was a meeting place for villagers, who would congregate here on cold nights and bring potatoes to roast on the embers of the kiln fire.

You can explore the mill machinery, with its restored wooden cog wheel, see the stone floor with its grinding wheels, and the Malting Floor where malted barley for brewing was produced.

The Malt Floor has an exhibit of local history including the old parish bier from Urswick and a collection of old photographs showing what the mill was like over the last century. In one corner of the Malt Floor is a beehive with a glass viewing window and information about beekeeping. 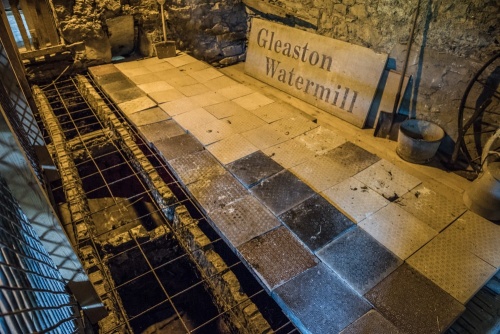 Gleaston Mill is a fascinating historic site offering a wealth of information about rural life. Highly recommended. We had the opportunity to chat with the owners and it was fascinating to hear them talk about their efforts to restore the mill and create a memorable visitor experience - and the obstacles they faced dealing with bureaucratic interference with the restoration work.

The mill is signposted from Gleaston village, off the A5087 coastal road. There is a large parking area opposite the mill with toilets and a picnic table. Be aware that the official postcode may take your satnav to Gleaston Castle, about 1/4 mile up the lane. 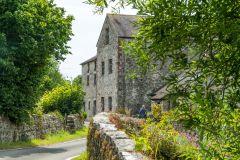 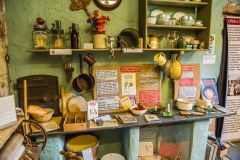 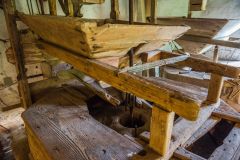 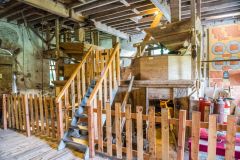 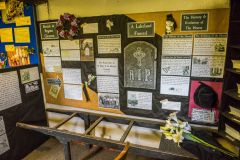 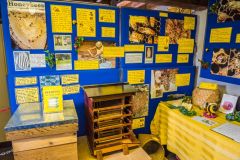 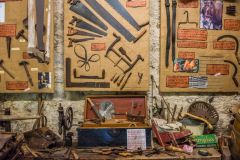 More self catering near Gleaston Mill