HERITAGE HIGHLIGHTS:   A wealth of Laurel and Hardy memorabilia 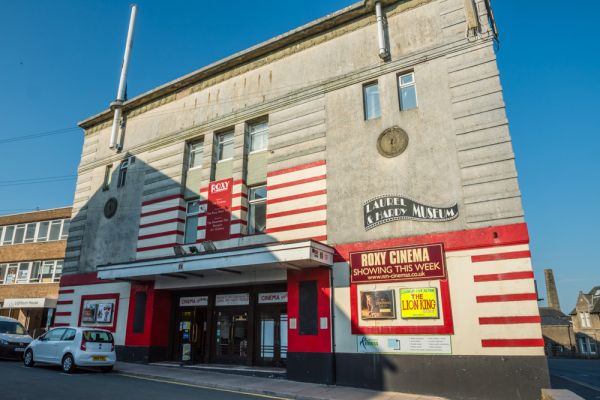 The Laurel and Hardy Museum

The historic Cumbria town of Ulverston was the birthplace of one half of the comic duo Laurel and Hardy, so it seems like a perfect venue for a museum dedicated to their lives and work. Stan Laurel (born Arthur Stanley Jefferson) was born in Ulverston in 1890.

The museum traces Stan Laurel's childhood and his connections to Ulverston, and his subsequent career and partnership with Oliver Hardy. Follow the careers of the two actors through letters, personal items, film props, movie posters, family photos, film stills, Laurel and Hardy memorabilia, and, of course, their wonderful feature films and shorts.

The Laurel and Hardy Museum began as a collection of photos gathered by Bill Cubins, a man with a lifelong love of Laurel and Hardy's films. Cubins filled scrapbooks with photos and kept adding more until his collection filled a small room, covering the walls and the ceiling. 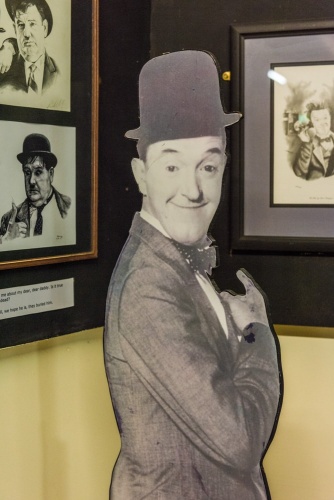 At that time it was thought that Stan Laurel had been born in North Shields, where his parent's lived, but Cubins unearthed evidence to show that he was, in fact, born at his grandparents' house in Ulverston. Cubins sometimes showed his growing collection to fellow enthusiasts, and the word soon spread that he was creating something remarkable.

His one-room 'museum' was officially opened in 1983, with an extension added in 1992 with money donated by a fellow enthusiast named Nico Morits who had won a Dutch TV quiz show.

Bill Cubins' daughter Marion continued to run the museum after Bill's death and was followed by Bill's grandson Mark. In 2009 the museum moved to the old Roxy cinema on Brogden Street. The Roxy is an authentic 1930s cinema, so it seemed the perfect place to house the Laurel and Hardy Musem!

The museum was opened on 19 April 2009, the same day as the iconic statues of Laurel and Hardy were installed outside Coronation Hall on County Road, just a block away. 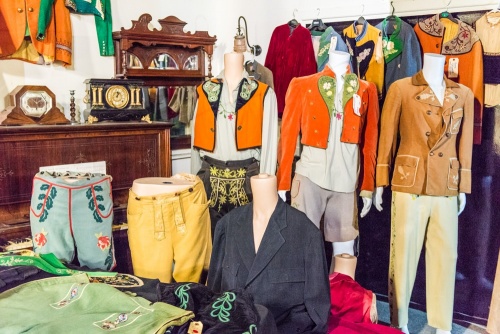 The museum is housed in a distinctive Art Deco cinema building at the southern end of Brogden Street. The Roxy opened on 21 June 1937 and the first film to be shown was 'Rose Marie' starring Nelson Eddy and Jeanette Macdonald. The newly opened cinema seated 800 people in the stalls and another 400 in the balcony and dress circle.

The front facade facing onto Brogden Street is a striking example of Art Deco style, with red and white horizontal stripes at ground level and over the marque entrance. 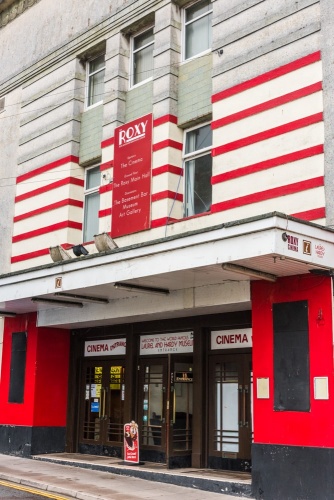 The museum features so many mementoes that it is hard to pick just a few, but we really enjoyed the family photos, given by the Jefferson family (Stan Laurel's original family name).

There is a recreation of a bedroom for 3 Argyll Street, Stan Laurel's birthplace, including an original bedroom mirror and drawers. There are several pieces of costumes worn on set for feature films, including a jacket worn by Oliver Hardy in the 1944 film Great guns and a pair of Alpine shorts worn by Stan Laurel in the 1938 film Swiss Miss.

There are hundreds of ceramic figures based on film characters played by the pair of comedians plus mugs, coasters, posters, photographs, t-shirts, puppet characters, LPs, Christmas cards, biscuit tins, and a very amusing advert for wiper blades featuring Stan and Olly. The collection is astonishing.

But there is more to the museum that memorabilia; throughout your visit, a selection of Laurel and Hardy short films are playing on the cinema screen - as we moved around the museum exhibits we kept stopping to watch the latest hilarious 'fine mess' the comedians were getting into. 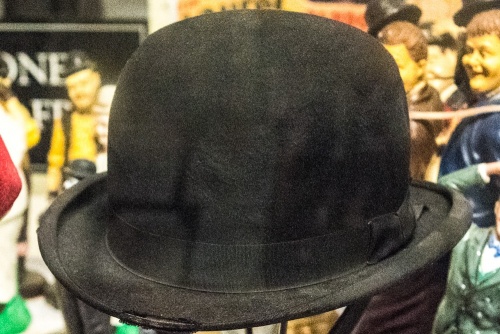 Arthur Stanley Jefferson was born in Ulverston on 16 June 1890 in his grandparents' house in Foundry Cottages (now Argyll Street). He lived with his grandparents n Ulverston to the age of six. He tried out for Albert Pickard's theatre at the age of 16 before joining a travelling theatrical group, earning the grand total of one pound a week. He joined Fred Karno's troupe, where he was an understudy to Charlie Chaplin.

The troupe came to the USA in 1910 when Stan left to write his own material. His stage name was Stan Jefferson until he realised that the name had 13 letters. Being superstitious, he renamed himself Stan Laurel.

His big break came when producer Hal Roach cast him in several comedy films. In 1920 he appeared in The Lucky Dog along with Oliver Hardy. The pair decided to team up, and over the next 31 years they appeared in over 100 films together.

Oliver Hardy was born Norvell Hardy in Harlem, Georgia in 1892. His father died before his first birthday and his mother turned to managing a hotel in Milledgeville. He briefly ran away from home at eight to join a group of minstrels, and the experience ignited his lifelong love of performing. He ran away again at 14 and studied singing in Atlanta before turning to films.

In 1918 he moved to California to pursue a film career. After several minor roles, he met Hal Roach. At this point, he added 'Oliver' to his name and got several roles as a 'heavy' in Roach's films. When Roach cast him opposite Stan Laurel, well, the rest is history ....

With over 100 feature films and shorts to their credit, it is hard to pick just one highlight, but their short 'The Music Box' (1932) won the very first Academy Award for Best Short (Comedy). 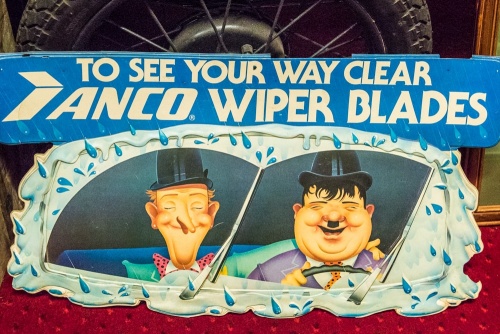 The museum is in the Roxy cinema complex at the south end of Brogden Street, just off the A590 (County Road). There are several nearby pay and display parking areas, but probably the most convenient is the parking area on Brewery Street, two blocks east of the museum. The museum and the parking area well signposted on the A590 from both directions.

Just be aware if you come by car that you are very unlikely to find parking in front of the museum itself, so I highly recommend following signs for the Brewery Street car park. 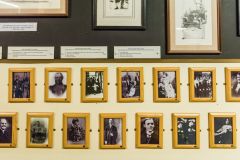 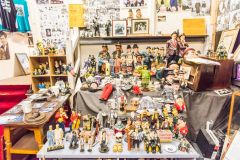 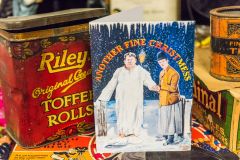 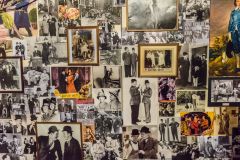 More self catering near Laurel and Hardy Museum

More bed and breakfasts near Laurel and Hardy Museum