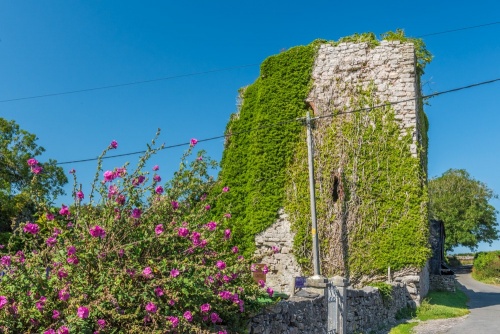 Gleaston Castle is an early 14th-century castle in a sheltered rural setting south of Ulverston, with surviving buildings now incorporated into a working farm.

The castle was begun in the late 13th century by the Harrington family of Aldingham, one mile west on the coast. We don't know what prompted the Harringtons to abandon Aldingham Castle; it may simply have been a desire for a more sheltered location that wasn't subject to the high winds along the exposed coastline of the Furness Peninsula.

We don't know when construction began; there was likely a fortified residence here in the late years of the 13th century and this was rebuilt following Robert Bruce's devastating raid in 1316, possibly around 1325. Edward III granted the Harrington family permission to enclose a park in 1340, but the first written record of a castle here comes from 1389. 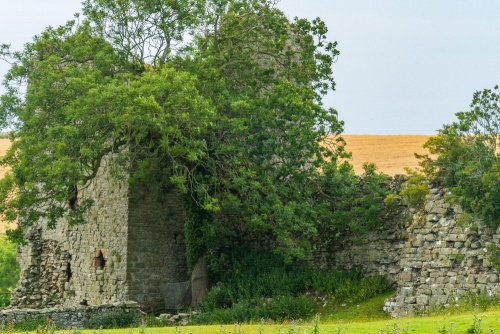 The north-west tower (the lord's residence)

Gleaston Castle was laid out as an enclosure castle, with four square mural towers built into a four-sided curtain wall. The north-west tower was larger than the others and probably functioned as the castle keep, where the lord of the manor resided. The keep had a ground-floor hall with a lord's residence above.

The towers and walls were built of limestone with windows and doorways dressed with red sandstone.

The male line of the Harrington family died out in 1547 and the castle passed by marriage to Lord William Bonville of Shuton. Bonville lived in Devon and simply abandoned Gleaston Castle. Most of the major buildings fell into ruin. Some were incorporated into a far that grew up on the site. 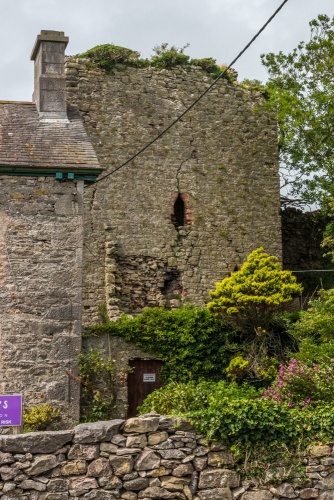 Three of the four corner towers survive, though none are in good condition. Long stretches of the curtain wall still stand. The north-west tower (the keep) stands in a field behind the farmhouse, visible from the nearby lane. This is in poor condition, with three sections of wall standing. The west tower, behind the modern farmhouse, is in better condition.

The south tower, which stands directly on the lane, is in the best condition of all and is very easy to examine. The tower was partially covered in overgrowth when we visited, but you can easily make out the windows and doorways, built of distinctive red sandstone.

Please be aware that the north-west tower (the keep) is in the middle of the farm field and though it is very easy to see from the lane, there is no public access. There are, however, occasional tours of the site. For example, the Society for the Protection of Ancient Buildings (SPAB) offered a recent member's tour of the site, led by one of the sons of the farm owner. 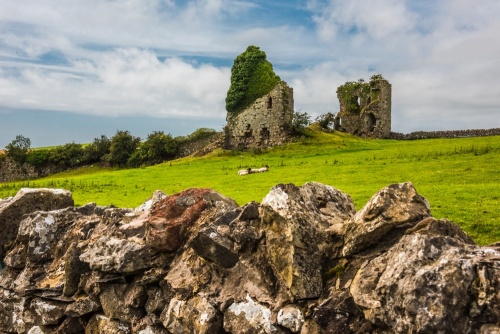 The north-west tower from the west

A few hundred yards down the lane from the castle is Gleaston Mill, a restored watermill that once served Gleaston Castle. The present mill dates to 1774 and features a fully-functional 18-foot waterwheel. The leat that feeds the mill runs through the castle site, strongly suggesting that John de Harrington built the mill as a manorial mill around the same time as he (re)built the castle. The mill has a very good exhibition on local history, including the story of Gleaston Castle and its relationship to the mill.

Gleaston Castle is on the minor road between Gleaston village and Scales, south of Ulverston. The castle is not signposted, but it is impossible to miss. There is no dedicated parking at the castle itself, though there is room to pull off the road safely, just remember the castle is part of a working farm and take care not to block farm access.

Another option might be to park at Gleaston Mill, where there is a large car park well off the road, and walk back up the hill to the castle. While you are there it is well worth taking the time to visit the mill.

It will not take long to examine the castle ruins since there is no public access to the towers.

More self catering near Gleaston Castle