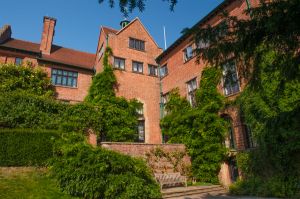 Chartwell
Chartwell was the family home of Winston Churchill; set in wonderful gardens with views across a private lake. An unremarkable exterior hides a comfortable family home, full of Churchill memorabilia, from cigars to paintings to war correspondence.

Winston Churchill purchased Chartwell in 1922 as a country retreat from the pressures of political life in London. He needed the escape, for his political career was at a low point in the early 1920s. He couldn't afford it, but he fell in love with the property and the wonderful view across the rolling hills of the Kentish Weald.

He went ahead with the purchase without consulting his wife Clementine, which predictably caused some marital friction. Churchill called in architect Philip Tilden to transform what was essentially a villa into a cosy family home, designed to make the most of the wonderful views and the sloping site. 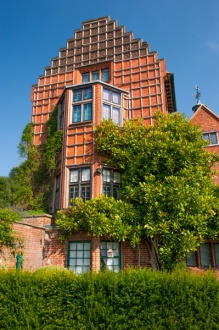 East end of the house

The centrepiece of the house is Churchill's study, where he wrote many of his works, particularly the historical books he produced after retiring from politics. He would often sleep in this room, and work either standing at a desk or pacing the floor, dictating to secretaries who were always on call.

Much of the remainder of Chartwell is less a house than a museum, crammed with memorabilia, from war uniforms to gifts given by political allies. Churchill's own paintings line the walls, softening the effect of glass display cases and information boards.

Visits to the house are by timed admission, but you are free to wander. If you can possibly avoid summer weekends I suggest you do so; we came on a sunny August day and it was extremely crowded. This wasn't a problem in the gardens and grounds but the house was very crowded and it was a bit difficult to easily enjoy all the rooms.

For Chartwell is not a stately home, with grand, spacious staterooms or showpiece halls; it is a comfortable house; a family home, and it was never made to handle the numbers of curious visitors who pass through the doors. If you do come at a busy time of year, I suggest you come early in the day! 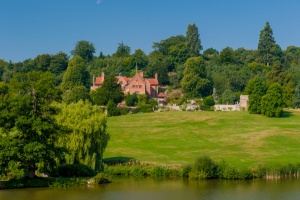 The house from the lake

Chartwell is set in a wonderful mix of formal and informal gardens dotted with little surprises like a tiny waterfall and a bench carefully placed to catch the eye. By the lakeshore is an oversized statue by Oscar Nemon of an elderly Churchill and his wife sitting side by side, while over the hedge you can make out the tip of a Kentish oast house.

Nemon was a firm friend of the Churchills and also crafted the famous statue of Sir Winston in the Members Lobby of the House of Commons in London.

A short distance from the house is the Studio, where Churchill retreated to follow his passion for painting. The Studio has slightly different opening times than the house itself, so please check the National Trust website if you'd like to enjoy a look at Churchill's private painting space and view his art on display.

Our family loved Chartwell. Though we visited on a Bank Holiday, when the summer sun shone brightly, and the house was full to bursting with fellow visitors, we found the experience of exploring the house and grounds an absolute delight. Yes, it was crowded. But, oh, what a wonderful experience. If you aren't particularly enamoured of Churchill, you will be after visiting, and if you already are, well, you'll need no second invitation!

Sir Winston Churchill loved this place. He bought it on a whim, without consulting his wife, which was very out of character. He didn't even have the money for it, but managed to keep it on the proviso that it would go to the nation after his death, as it has done.

In short, he was very fond of it, and you can see why. It's the homeliest stately home you're ever likely to see. In fact, Lady Churchill hoped that visitors would feel as if the family had just popped out into the garden.

And the gardens are beautiful, there's no other way to say it. The lawns, beds, and pools all seem lovingly tended. There is a kitchen garden, too, with a mix of familiar and unusual plants. Squash can, apparently, be grown vertically! In a corner is a child's playhouse used by Churchill's daughter. Elsewhere, there's a small butterfly house constructed by Sir Winston.

The house is made of dull red brick, and contains some rooms as they were used, like the sitting room and the study. Others are used as a museum, displaying Churchill's memorabilia and symbols of office, uniforms, and gifts. Judging by the gifts, he was a popular man, though political motives may have accounted for some. There is a bowl purchased in haste in Yalta by President Roosevelt, the day before Churchill's birthday.

As well as being a great house, Chartwell can show you something of Churchill's character. He had a dedicated studio in the garden and invited the house staff to see films in a downstairs room. The house feels as if it would welcome anyone. 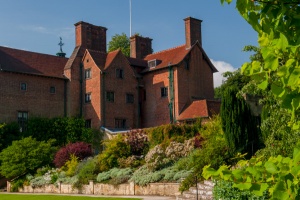 The house from the rear lawn 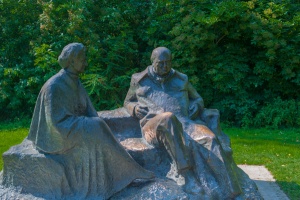 The Churchills' statues by the lake 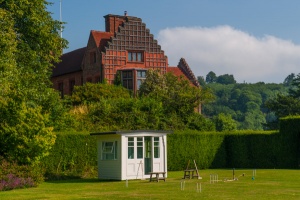 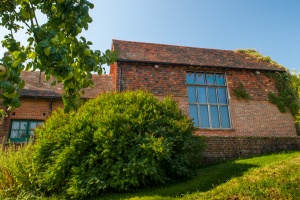 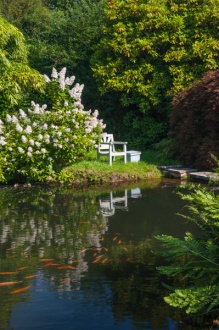 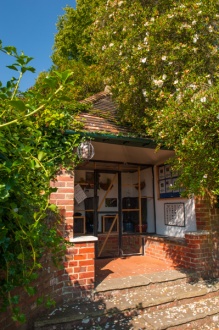 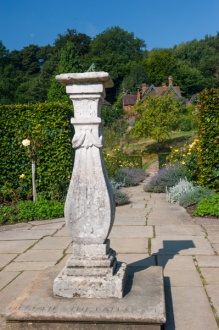 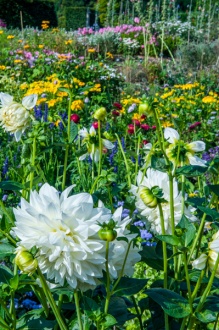 The walled garden in bloom

Garden: Terraced rose and water gardens commissioned by the Churchill family, golden rose walk planted for the occasion of the golden anniversary of Sir Winston and Lady Churchill.

More self catering near Chartwell >>

More bed and breakfasts near Chartwell >>