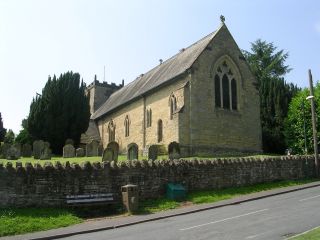 Ampleforth
A small village in Ryedale, on the southern border of the North York Moors National Park. By far the most interesting building in Ampleforth is the parish church of St Hilda, which dates back to Saxon times, and contains much later Norman work.

The most famous person associated with St Hilda's church is William de Courtenay, who served as a Prebend from 1362-1370. De Courtenay went on to be named archbishop of Canterbury in 1381.

Another prebendary was the Renaissance scholar Peter Carmeliano, who served the church for 30 years, from 1498-1528. As for the church, look for the 12th-century font and the worn effigy of a 14th-century knight who may have died in the Battle of Byland in 1322.

Ampleforth is perhaps best known for its Abbey and College. The Abbey was established as a monastery for Benedictine monks in 1802 and is regularly open to visitors for tours. When the Abbey was founded, the monks of Ampleforth Abbey also established a school, which is now known as Ampleforth College, a leading independent boarding school.

The village is served by a pair of traditional pubs; the White Horse and White Swan. The white Horse draws its name from the oversized likeness of a horse that was carved into the sloping hillside just west of the village.

The village was mentioned in the Domesday Book of 1086, where it was called Ampreford, which means the ford of the sorrel plant.

Just 2 miles distant is Byland Abbey, while the more famous medieval monastery of Rievaulx Abbey is only 4 miles away.

More self catering near Ampleforth >>

More bed and breakfasts near Ampleforth >>