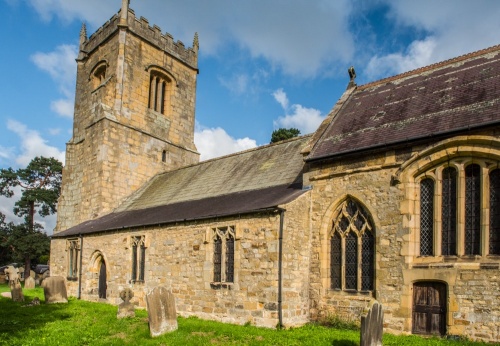 The pretty Yorkshire village of Gilling East lies in a valley bottom near the Holbeck, a tributary of the River Rye. The village stands on the old road out of Ryedale and is linked to the Hambleton Drove Road heading south towards Malton.

This was the main route between the Northumbrian kingdoms of Bernicia and Deira, which has led some historians to suggest that Gilling East was the place where King Oswine of Deira was murdered by his rival Oswui in AD 651. This theory is not universally endorsed by historians, but it does suggest that the village and its church, dedicated to the Holy Cross, have very ancient origins.

Incorporated into the south wall of the church is a worn stone carved with interlace patterns. This is thought to date to the 8th century and supports the theory that there was a very early church here. The carving may have formed part of a preaching cross or an ornately carved grave cover. 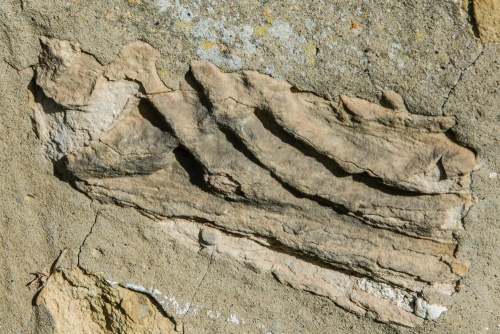 Aside from the 8th-century carving, the earliest parts of the present building - the pillars for the chancel arch and tower arch - date to the 11th century. The nave arches are late Norman, built sometime around 1190. The north aisle was added in the 14th century. The south doorway is 14th century, and the oak door it protects dates to the Georgian period.

The chancel is later than the nave, rebuilt in Decorated Gothic style in the middle of the 14th century by Sir Thomas de Etton of Gilling Castle. 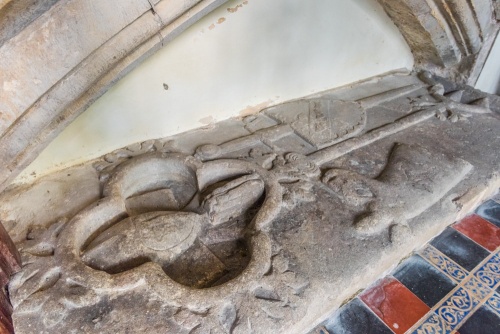 14th-century grave of a knight

In the chancel, tucked into the north-east corner, is an unusual 14th-century tomb slab under an arch. This may commemorate a member of the Malbys family, the church patrons during that period. The tomb slab consists of a floriated stone with two inset quatrefoils, one revealing the deceased head and the other his feet. The knight is shown wearing a bassinet helmet, and his hands are clasped in prayer.

On the left side are a crested helmet and the figure of what appears to be the head of a horse or perhaps a deer. If it is a deer then the knight is likely a member of the Malbys family, but if it is a horse then it could be Sir Ivo de Etton, a member of the Knights Templar.

On the chancel wall is a tomb recess dating to the late 14th century. You can see the very worn coat of arms of the Etton family on each side. 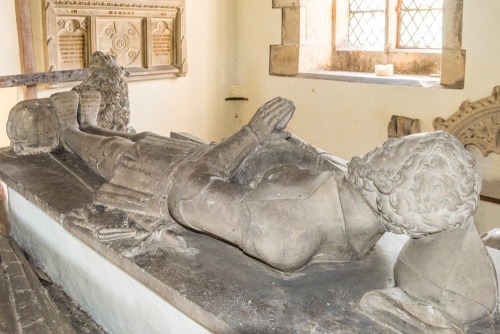 Near the south-eastern nave arch are three effigies depicting Sir Nicholas Fairfax and his two wives, Jane Palmes and Alice Harrington. Sir Nicholas served as the High Sheriff of Yorkshire under both Henry VIII and Elizabeth I. He died in 1572.

In the south aisle is a striking white marble monument to the memory of Thomas Fairfax (d 1828). The monument depicts a figure of Piety reclining over two urns. It was sculpted by Joseph Gott (1786–1860), a British sculptor working in Rome. Near the statue are two floriated 14th-century stone coffin lids. 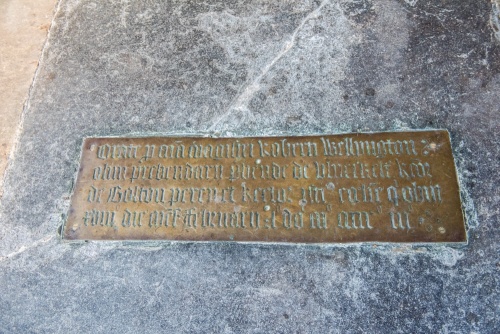 One of the Victorian windows depicts four of the six Biblical 'Acts of Corporal Mercy' based on Matthew 25:34-6. The scenes depict giving food and drink to the hungry and thirsty, visiting the sick, offering hospitality to strangers, and visiting prisoners. This subject is rarely seen in stained glass windows. The most famous example of medieval glass on the subject is at All Saints, North Street in York.

What is interesting about this window is that the figures are shown in medieval costume and all the architectural details are medieval. That might suggest that the artist was influenced by the All Saints, North Street medieval window, as none of the other 19th-century windows in the church shows the same medieval influence.

Set into a marble grave slab in the chancel floor is a small rectangular memorial brass commemorating Robert Wellyngton, who served as Rector of Gilling in 1438. Wellyngton built the west tower and gave money for a bell as well as inserting a priest's door in the chancel and installing the middle window nearby. 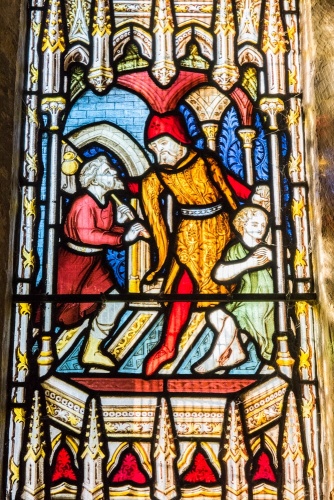 Scene from the Acts of Mercy window

In the south aisle is a crudely carved tub font. This was discovered buried in the churchyard. It has a cutaway section on one side, perhaps to take the baby's head during christening ceremonies.

Most of the window glass in modern, but there is a small collection of medieval glass fragments in the upper sections of the chancel windows.

How many churches boast a clock through the efforts of a famous cricketer?

Holy Cross does. In 1889 the cricketer Prince Ranjitsinhji Vibhaji Jadeja stayed at Gilling Rectory. 'Ranji', as he was often called, was the ruler of Nawanagar from 1907-1933. He played 307 county cricket matches for Sussex and 15 test matches for England. At Gilling East he organised cricket matches to raise money for the clock and repairs to the tower. The clock was finally installed in 1904.

Holy Cross is almost directly across from the gates to Gilling Castle on the B1363. There is no dedicated parking but it is easy to find parking along the road. The church was open when we visited. 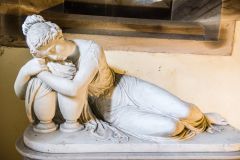 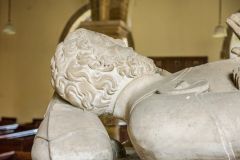 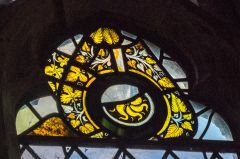 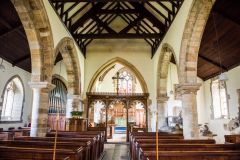