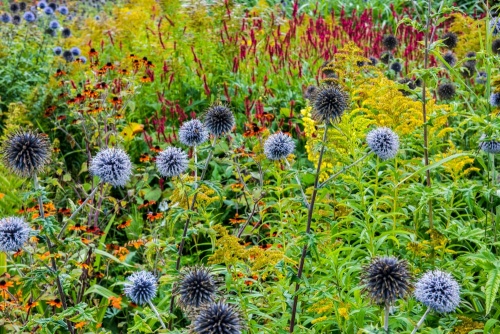 Helmsley Walled Garden is overlooked by two major historic sites; the splendid mansion and landscaped parkland of Duncombe Park and the ruins of Helmsley Castle. The garden dates to 1758 when it served as a kitchen garden for the Feversham family of Duncombe Park, providing vegetables, orchard fruit, and cut flowers.

The history of the walled garden really goes back another 71 years to 1687 when Charles Duncombe bought the Helmsley estate, which was sold by the Duke of Buckingham's executors to clear his sizeable gambling debts. Duncombe paid the huge sum of £90,000 for 40,000 acres of land. He could afford it; he was the third-wealthiest commoner in England.

When Duncombe died in 1711 the estate passed to his sister, but she already had an estate and didn't want Helmsley. So the estate went to her son Thomas Brown, who promptly changed his family name to Duncombe. As Thomas Duncombe, he built the mansion of Duncombe Park 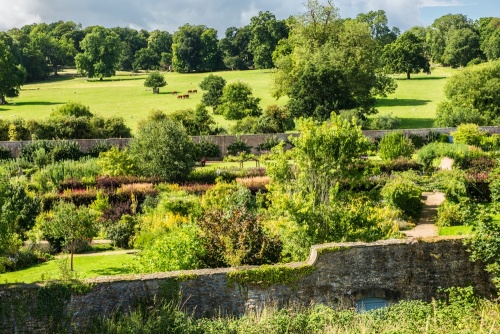 Helmsley Walled Garden from the ramparts of Helmsley Castle

A large house like Duncombe Park needs a garden to supply food for the table and flowers to brighten the house interior. So the Duncombe family built a large walled garden far enough away from the house that it would not ruin their carefully landscaped view. The chosen site was on low ground under the shadow of Helmsley Castle, on the western edge of the town.

By the middle of the 19th century, 20 full-time gardeners were working here. Glasshouses were built against the brick walls, with heated buildings for growing exotic fruit.

The days of the English country estate were numbered, however. Most of the gardeners joined the military in WWI. The 1st Earl died in 1915, and his heir was killed in combat in 1916. The 3rd Earl was just 10 years old when his father died. The estate trustees leased the house as a girl's school. The school administrators saw no reason to keep the garden going so they simply abandoned it. 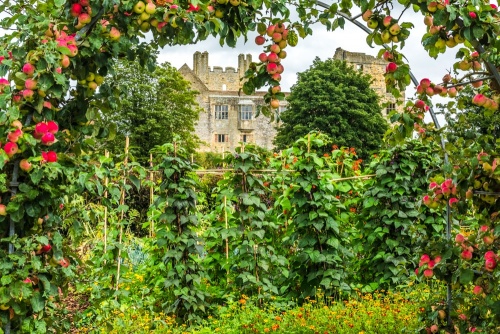 Helmsley Castle from the garden

For many years it was a market garden and a greengrocer grew fruit and vegetables within the walls. The 3rd Earl died without a direct heir in 1963 and the title died with him. A distant cousin inherited the estate, and when the school's lease expired, his family moved into the mansion. By that time the garden had been abandoned for a decade. It was overgrown and the 19th-century buildings were falling apart.

That's when Alison Ticehurst stepped in. 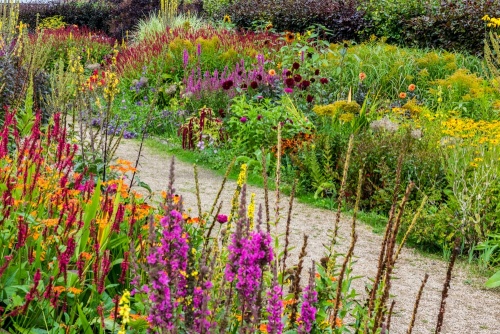 Ticehurst had a vision of transforming the historic walled garden into a healing space offering horticultural therapy and a peaceful environment for those who simply needed to get away from it all for a time. With the aid of volunteers, she discovered old maps and used them to find the original garden layout, including paths and the original dipping pool at a meeting of pathways in the centre of the garden. The garden was replanted, the orchard restocked, and the historic garden buildings repaired.

The result is truly special, a delightful garden literally in the shadow of Helmsley Castle's earthworks. Though modern, the garden has conserved and restored the original historic garden where possible.

The garden is loosely divided into separate areas such as a Clematis Garden, Long Border, and Cottage Garden. There are colour-themed areas, a kitchen garden, orchard, and a peaceful Garden of Contemplation. The Kitchen Garden produces vegetables or the popular on-site cafe, and there is a garden centre for plant sales. 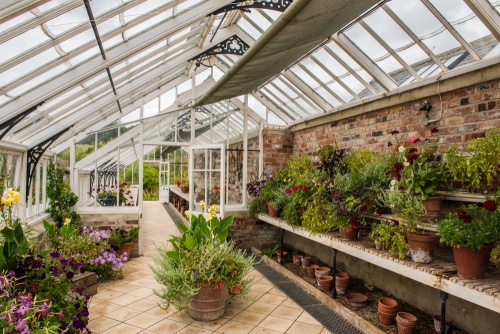 One of the restored Victorian glasshouses

A lush double-herbaceous Hot Border runs the entire length of the garden, and the restored Victorian glasshouses are full of colour. The Clematis Garden is a highlight, featuring over 100 separate varieties, and the Kitchen Garden features an edible flower garden area.

The Helmsley Walled Garden was named by The Times as one of the prettiest gardens in the UK open to the public.

The garden is immediately behind Helmsley Castle. There is a large public car park off Church Lane. From there simply follow the obvious signs around the back of the castle to the walled garden entrance. 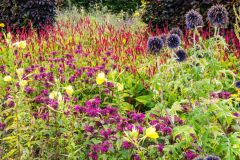 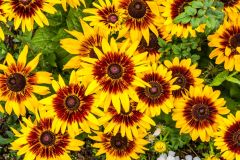 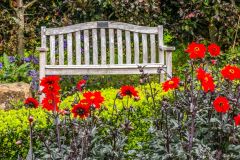 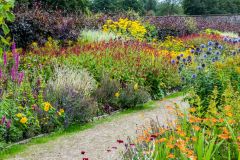 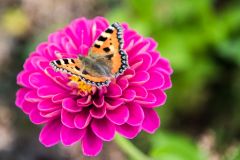 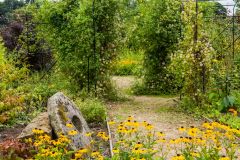