HERITAGE HIGHLIGHTS:   The wonderful rose window is a real treat. 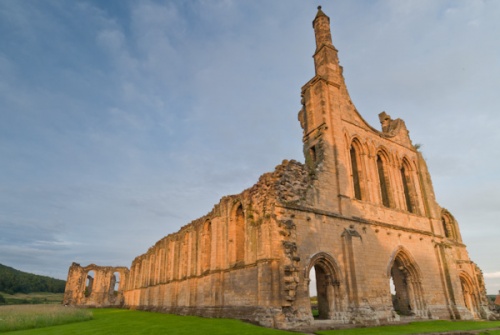 In 1134 the Savigniac monks of Furness Abbey in what is now Cumbria founded a daughter house at Calder. Within 4 years the monks fled from Calder to escape a Scottish raid. They asked to be readmitted to Furness but were refused, so they headed east, looking for a new home.

They stayed temporarily at Hood, in North Yorkshire, on land granted by Gundreda d'Aubigny and her son Roger de Mowbray, but in 1142 moved again, fetching up in Byland (subsequently called Old Byland to distinguish it from their final home). In 1147 they moved again, to an unknown location we know as Stocking, or Oldstead.

Later in 1147, the Savigniac order was merged into the Cistercian order. Now the monks began to drain low lying ground near Coxwold to prepare the site for their permanent home. They called this new site Byland.

An enormous amount of work was necessary to make the land ready to receive the monks, for the ground was marshy and subject to flooding.

The land was drained over a period of years, and the abbey was functional by 1177 when the monks finally moved in. From the size of the living quarters, we can guess that there were roughly 36 monks and 100 lay brothers. 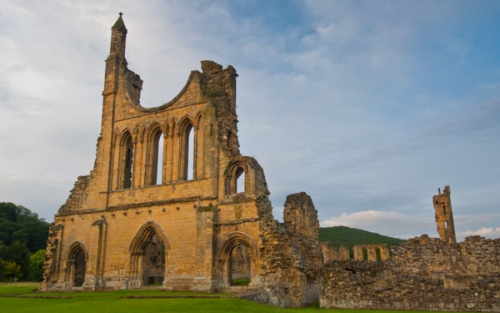 The abbey they built was typical in layout to other Cistercian houses, with lay brothers to carry out much of the demanding physical labour necessary to run the abbey, while the 'choir monks' focussed on spiritual matters.

The lay brothers quarters are the oldest part of Byland Abbey, dating from 1155. The oldest part of the church is late 12th century, but the real prize at Byland, the great rose window in the west front, is early 13th century.

When it was finished the church was 100 metres long, easily the equal of most European cathedrals, and by far the largest abbey church in England. It remained the largest Cistercian church until both Rievaulx and Fountains extended their choirs.

Incidentally, the 12th century stone altar table from Byland Abbey church was donated to Ampleforth Abbey, where it can now be seen in St Benet's chapel.

Most of the construction was finished by about 1200 AD, but later in the 13th century an abbots lodging was erected. Another much later building is a 15th-century meat kitchen. 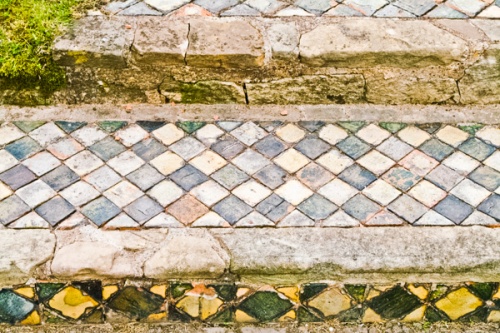 The precinct containing the abbey at Byland was exceptionally large, at over 50ha. The precinct was entered through a gatehouse, parts of which still stand. There are numerous humps and bumps on the turf within the precinct wall that hint at a wide variety of secondary buildings such as a dovecot, watermill, and guesthouse.

A second watermill lies just outside the wall. The mills were fed by a system of dams and leats which controlled water flow and kept flooding to a minimum. A bit further away from the abbey are remains of two fish ponds and a deer park.

The monks of Byland did well for themselves - most Cistercian monasteries did - and by the end of the 12th century Byland was referred to as one of three 'lights of the North', with Fountains and Rievaulx being the others.

The cloisters at Byland were one of the largest in Europe. In the 15th century, the cloisters were glazed in an effort to keep out the cold. The fact that the monks would even consider glazing such a large expanse says a lot about the abbey's wealth.

Byland Abbey was dissolved by Henry VIII in 1538/9, when the numbers of monks had shrunk to just 25, under an abbot. Henry granted the land to Sir William Pickering, and it passed in time through generations of the Wotton, Stapylton, and Wombwell families. It is now in the care of English Heritage and has regular opening hours.

The location is superb, in a peaceful countryside setting. Directly across from the abbey gates is a lovely old country inn, perfect for a relaxing pint after visiting the abbey!

The most enjoyable feature of the site for me was the large area of 13th-century floor tiles in the abbey church. The tiles are richly decorated, and for 13th-century work that had been exposed to the elements for so long, they seemed quite vibrant and alive with colour. 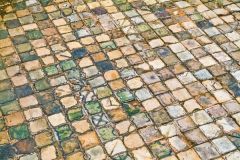 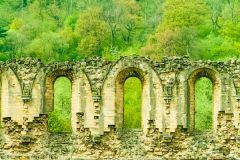 More self catering near Byland Abbey