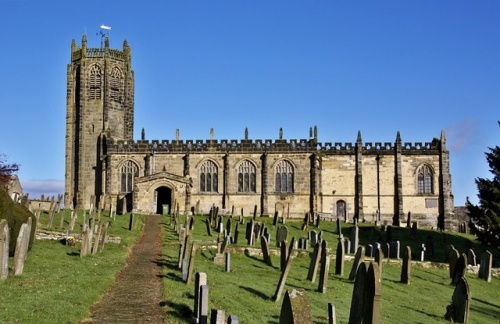 The 15th-century church of St Michael and All Angels stands at the western edge of Coxwold village. There has been a church here as early as the 8th century but the present building dates entirely to the period 1420-1430. It is best known for its links to the novelist Laurence Stern, who served as vicar here, and for ornate memorials to the Fauconberg lords of the manor.

The first written record of a church in Coxwold comes from AD 757. A papal charter of that year shows Pope Paul I ordering King Eadbert of Northumbria to repair the building. That Anglo-Saxon building was completely rebuilt in the first few decades after the Norman Conquest.

The Norman church, in turn, was rebuilt in the early 15th century. The new church was in the then-fashionable Perpendicular style, with pointed arches and elaborate window tracery. The Perpendicular church remained remarkably unaltered over the following five centuries. 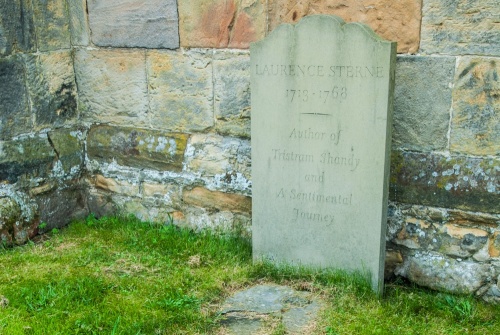 The chancel was refurbished in 1774 when the peculiar altar rail in the shape of a tongue was installed. The chancel is home to four imposing monuments to the Belasyse (or Bellasis) family, the Earls of Fauconberg. The Belasyse family lived at Newburgh Priory at the edge of Coxwold. 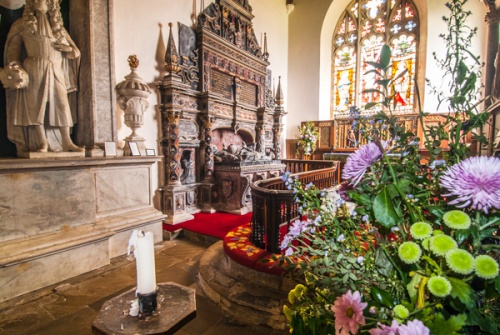 Author Laurence Sterne published the first two volumes of his nine-volume opus Tristam Shandy in 1759. The book was so successful that Sterne was appointed as the curate of St Michael's church in 1760. He lived at the rectory, which he renamed Shandy Hall.

While he was resident at Shandy Hall and filling the role of vicar Sterne published the remaining seven volumes of Tristam Shandy and wrote his other major work, 'A Sentimental Journey'. Sterne was more interested in writing than he was in his role as a country parson, so he hired a curate to perform his religious duties so he could focus on his writing.

Sterne was buried in London but his bones were later moved to Coxwold and were reburied in the churchyard. The original gravestone has been moved into the church porch to preserve it from weathering. A replacement gravestone mark's Sterne's burial place beside the south wall of the chancel. 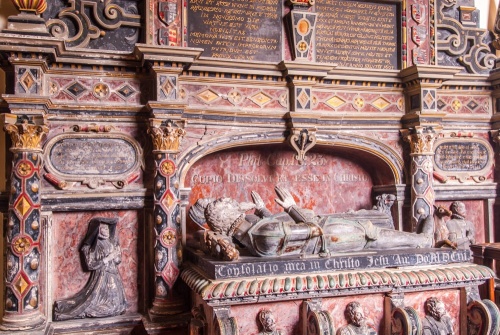 The gravestone was erected 'by two Brother Masons' even though Sterne was not actually a member of the fraternal organisation.

Set into the floor of the nave aisle is a marble slab with indents for memorial brasses (now missing) to Sir John Manston (d 1464). On the north chancel wall is an ornate memorial to Henry Belasyse (d 1647) and his son Thomas, Earl Fauconberg (d 1700). Beside it is a monument to William Belasyse (d 1603) and his wife Margaret. 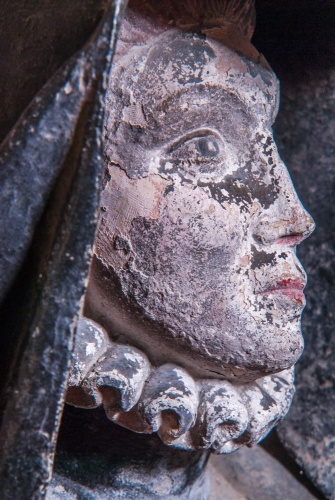 In the nave is a Georgian pulpit with a tester, along with 18th-century box pews. The pews are laid out to face the parson. The layout was devised by Laurence Sterne.

Over the chancel arch is a royal coat of arms to King George II flanked by the Fauconberg coat of arms. 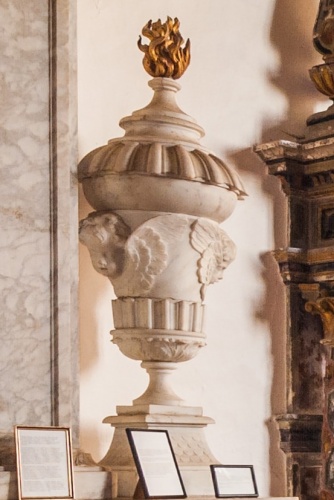 Gothic urn on the memorial to
Thomas, Earl Fauconberg (d 1700)

The church is at the western edge of the village. There is parking along the road. The church is normally open to visitors during daylight hours and was open when we visited. Do take the time to visit Shandy Hall, a short stroll away.

Image of the church exterior is (c) Paul Buckingham, repblished with gratitude under a Creative Comons license