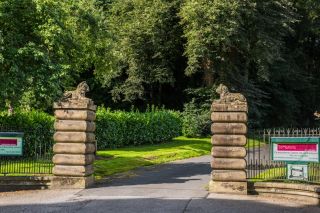 Gilling Castle gates
Gilling Castle began as a fortified manor house in the 14th century. The foundations of that early building form the cellar of the current structure, created by Sir William Fairfax in the late 16th century.

The Elizabethan building was later expanded and remodelled by Viscount Fairfax of Emley in the 18th century, with the aide of architect Sir John Vanbrugh (or perhaps James Gibbs). The castle is now home to St Martins, a prep school for Ampleforth College.

The original Gilling Castle was built by Thomas de Elton. Before the castle was even built, however, Thomas's father made a fateful decision; deciding that if the male line of the Elton family died out the manor should pass to his wife's family, the Fairfaxes.

This finally came to pass in 1489, when Thomas Fairfax claimed Gilling manor and the earlier fortified house. Thomas Fairfax's grandson Sir William Fairfax rebuilt the 14th-century house in 1571. He did so by leaving the first floor intact and completely rebuilding the upper storeys, adding a staircase turret and a Great Chamber.

The Elizabethan building was later expanded and remodelled by Viscount Fairfax of Emley in the 18th century, with the aide of architect Sir John Vanbrugh (or perhaps James Gibbs). Viscount Fairfax had the front court enclosed by a pair of wings, and remodelled the interiors in fashionable Georgian style. The exterior was altered in 1750 by John Carr of York, who also worked on Fairfax House in York for the family.

The Fairfax line died out in 1885, and the house was eventually purchased by Ampleforth Abbey. At the time of the sale, the interior panelling and glass from the Great Chamber were sold separately It was only in 1952 that the fittings were re-purchased and restored to Gilling. The castle is now home to St Martins, a prep school for Ampleforth College.

The most impressive feature at Gilling Castle is the 16th century Great Chamber, which is remarkably unchanged since it was built. The Chamber is filled with heraldic panels depicting the great families of Yorkshire. The heraldry covers the wainscoting, painted glass windows, and plasterwork ceiling. It depicts not only the Fairfax and related families but all the great families of each region of the county.

Though the castle is a full-time school, there are occasional guided tours. See the college website for details.

More self catering near Gilling Castle >>