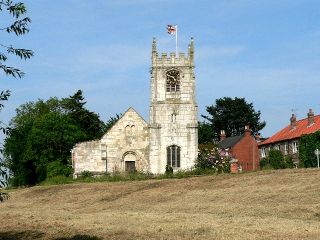 Cawood is a small village in north Yorkshire, on the River Ouse just south of its confluence with the River Wharfe. It was to Cawood that Cardinal Wolsey retired in 1539, hoping to avoid Henry VIII's displeasure at his failure to procure a divorce from Catherine of Aragon.

The first historical mention of Cawood comes from AD 937 when King Athelstan gave the castle here to Archbishop Whulstan. Though the Cawood estate was given to the see of York, the de Cawood family remained as lords of the manor. A fascinating discovery from this period is The Cawood Sword, discovered in the River Ouse. Now in the Yorkshire Museum in York, the sword is known for its peculiar inscription running along the blade.

Cardinal Wolsey's palace was largely destroyed during the English Civil War, but the ornate 15th-century gatehouse built by Kempe remains. The gatehouse formed part of a complex of medieval buildings begun as a Bishop's Palace around 1181. King John is known to have visited the castle while hunting in Bishops Wood.

Around 1374 the palace was rebuilt as a quadrangular castle. The most celebrated event in Cawood's history came in 1465 when the Archbishop of York held a huge feast here, lasting several days. The 'Great Feast of Cawood' was intended to be more splendid than Edward IV's coronation feast.

After the destruction wrought by the Civil War, only the gatehouse and banqueting hall were still standing The gatehouse is now owned by the Landmark Trust and rented out as holiday accommodation.

The current parish church of Cawood was begun around AD 1150, replacing an earlier church dating to perhaps the 10th century. It seems likely that the Archbishops of York used the church as a chapel when in residence at Cawood Castle. The earliest parts of the church are the Norman west wall and doorway.

The chancel arch dates to 1250, as does the east end of the chancel and the south nave arcade. The most interesting interior feature is the 1628 monument to Archbishop George Mountain, a native of the area who served as Archbishop of Lincoln, London, and York. He died just 2 weeks after being named Archbishop of York and left 100 pounds to the poor people of Cawood.

Perhaps the most iconic historic structure in Cawood is one of the most recent; the swing bridge across the River Ouse, built in 1872. As its name suggests, the bridge pivots and swings out of the way of river traffic. 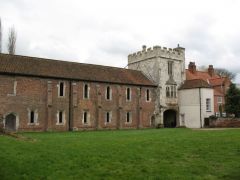 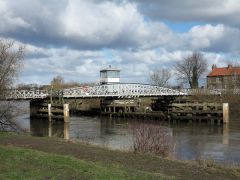 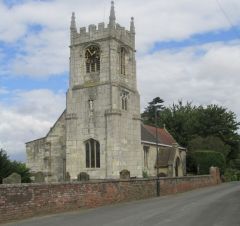 More self catering near Cawood >>

More bed and breakfasts near Cawood >>