Self Catering in Yorkshire - Tadcaster 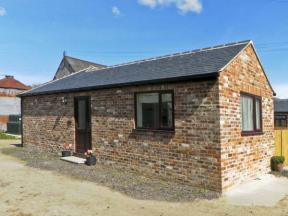 This semi detached, single storey cottage is located on the owner's farm near to Tadcaster in Yorkshire and can sleep four people in two bedrooms.

1 Pines Farm Cottages is a brick built, semi detached, single storey cottage on the owners' arable farm, just four miles from Tadcaster in North Yorkshire. With one double bedroom and one twin room plus a family bathroom, the cottage sleeps four people. Also in the cottage is an open plan living area with a fitted kitchen, a dining area and a sitting room.

Outside the cottage is off road parking for two cars and an enclosed garden with outdoor furniture and a barbecue. With its neighbouring cottage, 1 Pines Farm Cottages can sleep twelve people and is an excellent base for a family holiday in the Yorkshire countryside.

Nice place but heating controls locked
Nice cottage. Friendly owners. Remote. Could do with larger fridge and freezer and more cooking utensils. Heating controls under lock and key. Owner did change when asked but would be far better to leave control with the guests so they can set time and temperature to suit their needs. Wouldn't want to spend Christmas there. Would recommend with riders. Not allowed to see cattle shown in Sykes pictures as a closed herd.
Robert H
2018-09-25

Lovely cottage
Spent 5 days staying here.... Lovely, comfortable and quiet. Good size, good enclosed garden, lovely to spend your evening when the weather is as beautiful as the last week has been! Tadcaster is very close, as is York! Great location, lovely and quiet, and would definitely recommend!
ruth w
2018-06-29

This Cottage was so spacious, it was so relaxing and the people so friendly. We all loved it and highly recommend, hope to return soon.
Mrs Jennings
2015-10-17

Nice spacious bungalow
This bungalow was lovely and spacious and very clean. Off a dirt track road so very quiet although it is in the same grounds as the owners farm house and is directly overlooked. The garden was small but adequate but again overlooked. The facilities were great with dishwasher and washing machine. However one thing we really took exception to was the fact that the central heating thermostat control was completely cased in and could only be opened by a key which the owner obviously had. When we asked about this and how we could put the heating on for an hour in the mornings as it was quite chilly we were told in no uncertain terms that it was warm enough and that was that! Not the way to treat a paying guest in my book. There was a log fire but you had to buy the logs. Such a pity really because it is very convenient for getting into York and surrounding areas however I really would not want to stay in winter and have the heating controlled for me.
caza60
2015-06-26

Get an Ordnance Survey map covering the Tadcaster area.