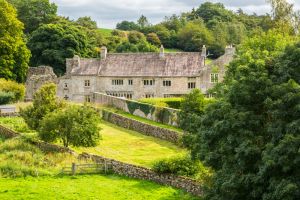 Coverham Abbey was a Premonstratensian monastic house established by Helewisia de Glanville in 1190. De Glanville was the daughter of Ranulf de Glanville, Lord Chief Justice of the realm.

The original site of the abbey was Swainby, but around 1212 the original abbey was re-founded at Coverham by Helewisia's son, Ranulf fitz Ralph.

The abbey was badly damaged in a Scottish raid in 1331 but managed to recover and by the end of the 14th century, there were 15 monks in residence, under the leadership of an abbot.

The most famous name associated with the abbey is Miles Coverdale, who produced the first translation of the Bible into English in 1535. It was thought at one time that Coverdale was a monk at the abbey, but this seems mere wishful thinking. It isn't even clear that he was a native of Coverdale, though he was almost certainly born in Yorkshire.

Coverham and the Pilgrimage of Grace

When Henry VIII began suppressing monasteries across the north of England there was a backlash from staunch Catholics who resisted the king's sweeping changes. The rebels in Yorkshire used the plight of Coverham Abbey as a rallying point.

They reinstated the abbot and monks of Coverham, though it seems likely that the clerics were merely pawns in the rebels' game and were not themselves terribly keen to defy the king. The rebellion was quickly crushed, and the leaders executed.

Coverham was dissolved by Henry VIII in 1536. It was sold to Humphrey Orme, and the abbot's house and guest lodging were converted into a private dwelling. The north range of monastic buildings was rebuilt around 1800 as Coverham Abbey House, and the garden of the 19th-century dwelling contains the south arcade of the abbey church. Beyond the redundant church are the remains of the abbey's mill ponds.

Part of the church transept survives as well as a pair of arches. Visitors can also see the carved stone effigies of a pair of knights thought to be sons of the foundress. The gatehouse to the abbey is partially intact, with the rear arch of the gatehouse passage still standing.

The house is not normally open to the public, but you can see the abbey ruins from the nearby redundant parish church (Churches Conservation Trust). It isn't immediately obvious, but if you walk to the eastern edge of the churchyard you come to a very good viewpoint looking over the boundary wall directly down at the abbey and its outbuildings.

It is very easy to get a good view of the abbey gatehouse and you can make out the earthwork remains of medieval features in the fields surrounding the house. 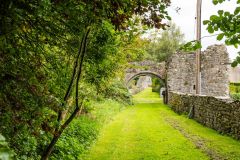 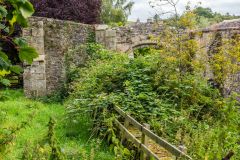 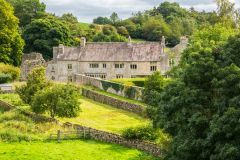 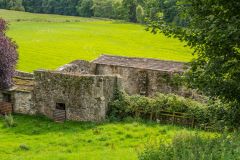 More self catering near Coverham Abbey >>