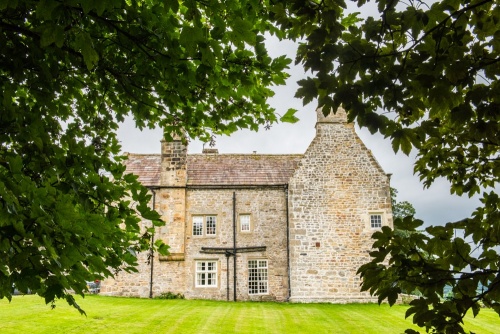 Braithwaite Hall is a lovely 17th-century farmhouse set in the beautiful countryside of the Coverdale Valley. The interior features period panelling, fireplaces, and an oak staircase with solid plank treads. The Hall was built in 1667 of rubble dressed with ashlar beneath a slate roof. It is two stories high with an attic above and laid out on an E-plan with a pair of projecting wings.

The Hall is first mentioned in the historical records in 1475 when it made up part of the larger manor of Middleham. During the 16th and 17th centuries, it was let to a succession of tenants. The tenants exploited the mineral wealth of the estate, mining coal and limestone.

The house as we see it today is primarily a product of the 17th century, with a wonderful array of original features. Braithwaite Hall is not a stately home, but an intriguing house with a mix of historic features.

The hall is only open by prior arrangement with the tenant. Please see the National Trust website for details.

Our family made arrangements to visit Braithwaite Hall through the National Trust, who contacted the tenant to make arrangements. The whole process was very quick and easy as we came up with a mutually convenient time. 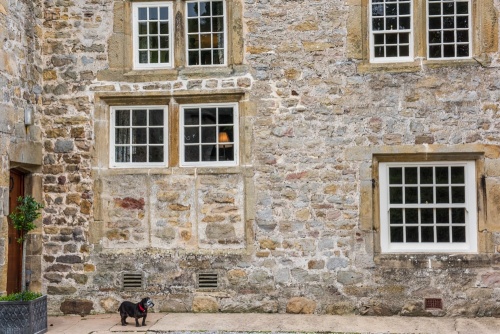 We arrived at the agreed time a few minutes early to find another group of visitors arriving at the same time. We were greeted, not by the tenant but by several very friendly dogs. The tenant followed quickly and proved to be an extremely friendly and welcoming hostess. She explained that her husband's parents used to occupy the Hall, and she and her husband had followed in their footsteps.

She showed us into the house and led us directly to the Jacobean staircase, the real architectural highlight of the Hall. The staircase has wide oak steps made from single planks, beautifully turned balusters and newels topped with ball finials.

From the staircase, she led us into the oldest part of Braithwaite Hall, the hall, a large chamber with a beautiful 17th-century fireplace. The hall is light and spacious, a complete contrast to the neighbouring oak-panelled Drawing Room. The Drawing Room panelling is a later addition, and you can see where the room was enlarged by the removal of an interior wall.

The tour was short, but the Hall interior is wonderful and it was fascinating to hear the tenant talk about the house and how it has changed over the centuries. She also told us how she has to regularly polish the oak staircase to keep it in pristine condition. It sounded like a lot of work but also like a labour of love. It was fantastic to hear someone talk about the hard work involved in maintaining a historic house like Braithwaite Hall.

Middleham Castle (English Heritage) is located very near Braithwaite Hall, and the site of Coverham Abbey is less than a mile to the west. 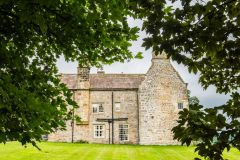 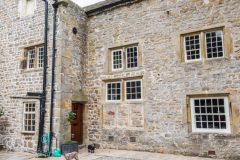 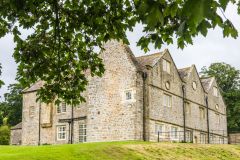 More self catering near Braithwaite Hall >>