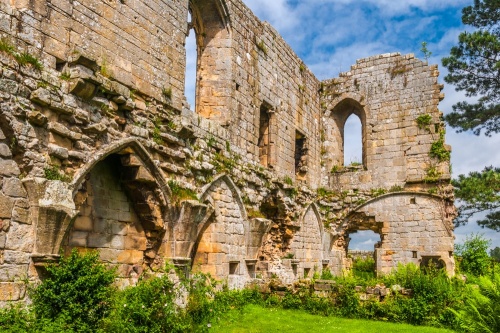 Jervaulx Abbey is a ruined Cistercian monastery located in a peaceful valley setting in the Vale of Ure, a few miles east of the Yorkshire Dales. The monastery was founded in 1156 as a daughter house of Byland Abbey. Apart from its historical significance and the beauty of the location, Jervaulx is known for its horticulture; over 180 varieties of wildflower grow in and on the abbey walls.

Jervaulx was originally based at Fors, a few miles distant, but the land there proved to be poor for farming and the Cistercian monks moved to the current site. They were known for raising horses, and the abbey was the original home of Wensleydale cheese.

The abbey was destroyed during Henry VIII's Dissolution of the Monasteries, and the last abbot of Jervaulx was imprisoned in the Tower of London, where his signature can be seen, carved into the wall of his cell.

The abbey buildings were dismantled, but a large amount of the fabric and furnishings at Jervaulx made their way into parish churches throughout the Yorkshire Dales. Thus you can find a carved screen at Spennithorne, the grave of abbot Robert Thorneton (d. 1533) at Middleham, a gilded rood screen at Aysgarth, and window glass at Bedale church. 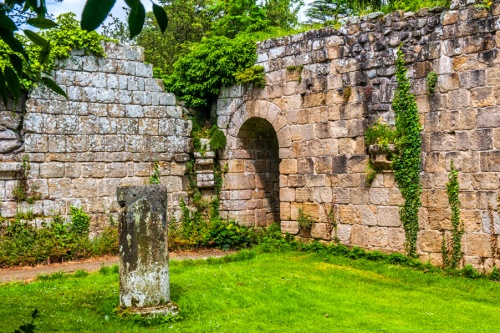 Unlike most ruined abbeys in the UK, Jervaulx is privately owned; indeed it is the second-largest medieval monastery in Britain in private hands. It is refreshingly easy to visit the site; only an honesty box awaits visitors at the gate (a note to the owners: I'm an honest fellow - I paid!)

Though the abbey ruins are not as impressive as other monastic sites in Yorkshire such as Rievaulx or Fountains, I think I actually enjoyed Jervaulx more; the location is so peaceful, and there are seldom large numbers of visitors.

My abiding memory of Jervaulx is the beautiful array of wildflowers that seemed to sprout from every nook and cranny of the ruined walls, and cascade over the crumbling stone. If ever a medieval monastery deserved the label 'romantic', it must surely be Jervaulx. 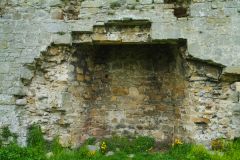 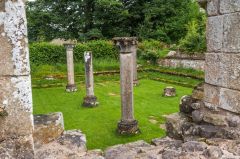 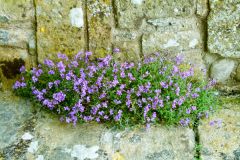 More self catering near Jervaulx Abbey >>