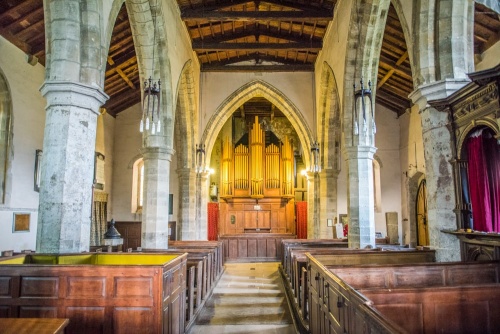 The historic village of Wensley stands at the eastern end of Wensleydale. The parish church of Holy Trinity is a mainly 13th-century building, but its roots go back much further, and it houses numerous examples of Saxon stonework. Holy Trinity was built in 1245 to replace an earlier Norman building, which itself stood on the site of a Saxon church.

The south chancel is the best-preserved part of the 12th-century building and has survived almost unaltered. The nave, aisles, and north porch were remodelled in the 14th century. The south porch was added in the 15th century, at the same time that the aisle roofs were raised and the buttresses with their armorial shields were added.

Wensley church had a long association with the powerful Scrope family of Castle Bolton. The church interior is full of Scrope family monuments. In the north aisle is a Purbeck marble monument to two members of the Scrope family, erected in 1614.

The most impressive feature associated with the Scrope family is not a monument, however, but the ornately carved 17th-century family pew with its superb woodwork. The pew features a beautifully carved Tudor screen thought to have been brought here from Easby Abbey after the Dissolution. 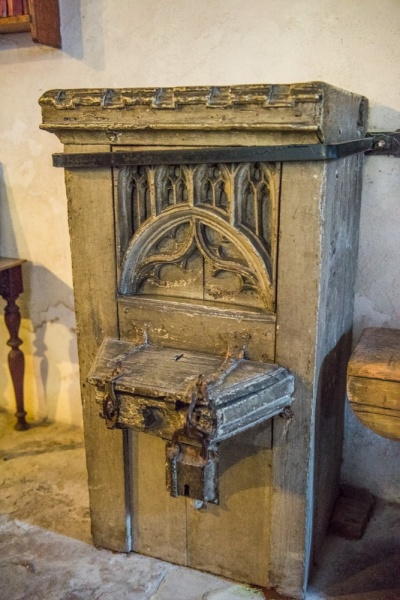 Most of the furnishings date from the Elizabethan period to the 19th century. The beautifully carved 16th-century pews are decorated with heraldic beasts. The pews were carved around 1527 by a school of craftsmen known as the Ripon Carvers, whose most famous carvings adorn Ripon Cathedral. The poppyhead bench ends are beautifully carved with both real and imaginary figures of animals.

Also of interest is a 15th-century wooden panelled cupboard in the north aisle, which traditionally is said to have housed relics of St Agatha, the patron saint of Easby Abbey. The reliquary is thought to be the only wooden one surviving in England.

Other highlights include a 13th-century sedilia and piscina, and a lovely 15th-century choir screen. The choir stalls themselves are very nicely carved and date to 1527.

On the north wall of the nave are fragments of 14th-century wall paintings. One painting shows three dead bodies being eaten by worms. A second painting depicts St Eloi shoeing a horse possessed by the Devil.

The font dates to 1678 and is carved with the names of two churchwardens and the rector of the day. The carved wooden font cover was found under a pile of rubble in the tower in 1928.

In the nave are 18th-century box pews and a double-decker pulpit of the same period. The pulpit was originally part of a three-decker design and was installed in 1760 at the cost of 12 pounds 4s 10d.

In the sanctuary is a beautifully intricate memorial brass commemorating Sir Simon de Wensley, a rector who died in 1394. The full-length brass is one of the finest in an English parish church. At the head of the Wensley brass is a later brass to Rector Oswald Dykes, who died in 1607.

Holy Trinity is no longer in regular use and is looked after by the Churches Conservation Trust. There is so much of historical interest here that it really would be a shame not to visit this ancient church! 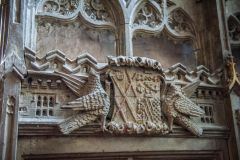 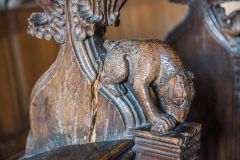 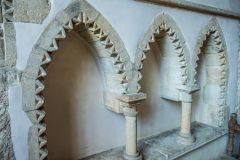 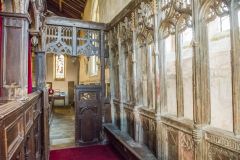