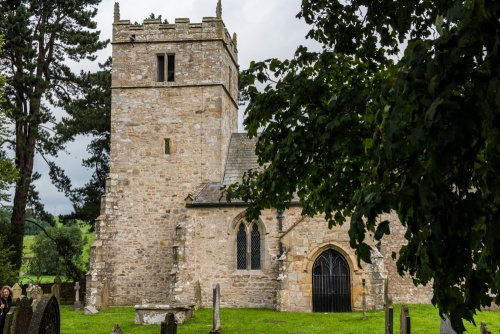 The 13th-century church at Coverham stands in a superb setting on the edge of the Yorkshire Dales, near the River Cover which gave its name to the village and to the valley of Coverdale. Holy Trinity stands above the site of the 12th-century Premonstratensian Abbey at Coverham.

The church was granted to the Abbey as part of its foundation endowment and the abbey had the right to present the incumbents, known as Perpetual Curates.

Nothing remains of the medieval village that once thrived here beyond turf-covered bumps in the fields surrounding the churchyard.

In 1535, just before the Abbey was dissolved, a former Augustinian Canon named Miles Coverdale published his famous translation of the Bible into English. He later served as Bishop of Exeter before escaping abroad during Queen Mary's reign. After Mary's death, he returned to England and served as rector of St Magnus the Martyr Church in London.

Despite his name, there is no evidence that Miles Coverdale was born in the Dale, though he is thought to have been a Yorkshireman, so he may have taken his name from the dale. Miles Coverdale is commemorated in a memorial stained glass window at the west end of the south aisle. Look for his arms impaled on those of the see of Exeter.

The church is a largely 13th-century building, with a late 15th or early 16th-century tower. The south aisle was added in the 14th century. Most of the interior furnishings date to Victorian restorations in 1854 and 1878, prompted by the Lister family of Coverham Abbey.

There are 13th-century lancets and larger 14th-century traceried windows in the south wall, and a 14th-century piscina. The piscina is inscribed with the initials TP, probably for Thomas Pigott of Melmerby who established a chantry at Coverham before his death in 1509. 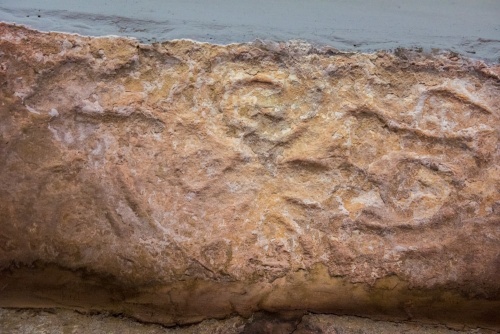 The highlight of Coverham church is the sandstone lintel over the south door. This is a reused section of a Saxon cross shaft and may date to the 9th century. Its presence might be an indication that there was a church on this site long before the current building was erected, but it is equally likely that the carved stone was brought to Coverham from elsewhere. If the stone is original then it is likely that the nave and chancel stand on the foundations of an earlier Saxon church.

The lintel is carved with a pair of figures, perhaps forming part of a Crucifixion scene, though they are much worn and it is difficult to discern who or what they are intended to represent. The best way to view the carving is to open the south door, stand under the opening and look up.

Holy Trinity is built of rubble, with a slate roof, and consists of a nave, north vestry, south aisle, chancel, south porch, and west tower. The south aisle arches are 14th century but the chancel arch is Victorian. Most of the furnishings are also Victorian, including the pulpit, lectern, pews, and communion rails. Only one earlier pew survives, dating to 1743.

The Victorian restorations gave the church a wonderfully vivid reredos with blue, green, and white tiles framing a scene depicting the Agnus Dei, as well as Alpha and Omega symbols. The reredos was given by the Lister family of Coverham Abbey in 1878.

The oldest memorial is to Edmund Smith, who died in 1798. Other memorials include one to John Osborn (d. 1922) whose family gave a bed in Darlington General Hospital for the benefit of parishioners from Coverham and Middleham.

A small collection of medieval stained glass has been set into the upper section of the south aisle windows. The glass probably dates to 1320 and depict the arms of local families.

This lovely country church is no longer used for regular worship and is in the care of the Churches Conservation Trust. It is usually open daylight hours.

From the eastern edge of the churchyard you can look down on the remains of Coverham Abbey, a medieval monastery transformed into a Tudor house after the Dissolution of the Monasteries. The abbey was founded sometime before 1187 by Helewise, daughter of Ralph de Glanville, Chief Justice of England. It was dissolved by Henry VIII in 1536 and almost immediately became a focal point for the protests against the Dissolution known as the Pilgrimage of Grace. 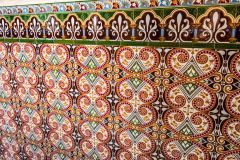 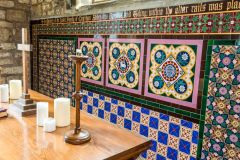 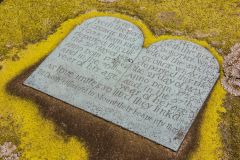 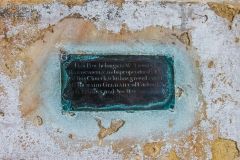