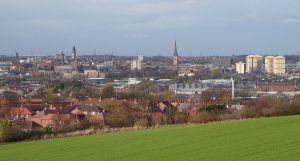 A large town near York, Wakefield's name likely derives from the old English for a place where wakes were held. The town existed at the time of the Domesday Book, and Wakefield was granted a charter for a market in 1203.

During the medieval period, it was an important inland port and a centre of the wool trade, with large grain warehouses along the river holding huge supplies brought from as far away as Cambridgeshire.

In the 19th century, Wakefield had one of the largest cattle markets in Britain, and industrialisation brought wool spinning mills and coal mining.

Wakefield was the site on one of the most decisive battles of the Wars of the Roses in 1460, when a force under Richard Plantagenet, Duke of York was defeated by an army loyal to Henry VI near Sandal Castle. A memorial to Duke Richard on Manygates Lane in Sandal marks the traditional spot where the Duke fell in battle.

The actual spot may be slightly north, near the gates of Manygates School. That site was originally marked by a wooden cross but the cross was destroyed by Parliamentary troops during the Civil War. The memorial was erected by public subscription in 1897 after local historian JW Walker declared that he had found the site of the original monument built by Edward IV.

The castle ruins look down on Wakefield and the River Calder. Sandal Castle was begun by the Norman lord William de Warenne shortly after he was granted the estate in 1107. De Warenne built the fortress of timber, defended by earthworks, and erected a similar castle on the other side of the river.

In the 13th century the curtain wall, keep, and secondary buildings were rebuilt in stone by the 6th and 7th Earls Warenne. The castle was besieged 3 times during the Civil war before it was slighted by Parliament to make it unusable for military purposes.

Another historic highlight in Wakefield is Chantry Bridge, with a rare surviving chantry chapel built into a 15th-century bridge across the River Calder. The bridge chapel is one of only 4 surviving examples in England (the others are at Rotherham, St Ives in Cambridgeshire, and Bradford-on-Avon in Wiltshire.

The bridge was built between 1342 and 356 on the main road south to Doncaster. The chapel, dedicated to St Mary, was licensed in 1356 and was used for worship until chantry chapels were closed at the Reformation.

Similar chapels on 3 other bridges into Wakefield were destroyed, but St Mary's Chapel survived because it is a structural part of the bridge. It was used as a shop, a library, a storehouse, and an office before it was restored in the 1840s. The medieval facade was removed to Kettlethorpe Hall where it was used for a boathouse. It is now a chapel of ease in the Wakefield Cathedral parish.

The 14th-century parish church of All Saints was raised to cathedral status in 1913. The church was founded in the Saxon period, but that was rebuilt in the late 11th century when the church was owned by Lewes Priory in Sussex. The 11th-century church was rebuilt in 1329, and again in 1469 in Perpendicular Gothic style.

Highlights include the 15th-century timber ceilings of the nave and aisles. The cathedral boasts excellent stained glass windows by the Victorian designer Charles Eamer Kempe. Other historic features include a 17th-century rood screen and a Jacobean pulpit. A set of medieval choir stalls survive, carved with grotesque figures of beasts and a Green Man.

Wakefield is well-supplied with fascinating museums, including the National Coal Mining Museum at nearby Overton. Visitors can descend 140 metres underground and experience what life was like for miners. Learn about the role played by ponies in coal mining and take a train ride to a coal pit.

The Wakefield Museum, located in the library on Burton Street, traces the heritage of the city from its origins to the present. See recreations of a Victorian kitchen, a 1940s sitting room, and the amazing creations of the Victorian explorer Charles Waterton, made from pieces of animals.

The Mental Health Museum tells the story of the West Riding Pauper Lunatic Asylum, which opened in 1818. See how 'lunatics' and people with mental health issues were dealt with by Victorian society, with original padded cells, restraint devices, and medical equipment.

Outside Wakefield is Nostell Priory, a stately home built on the remains of a medieval monastery. The interiors were designed by Robert Adam and are considered among his finest works. 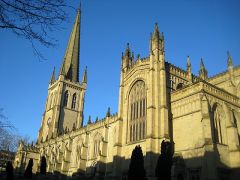 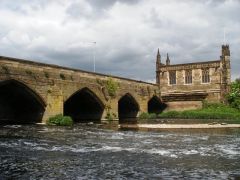 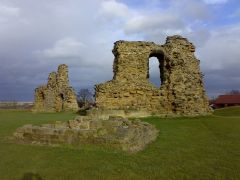 More self catering near Wakefield >>

More bed and breakfasts near Wakefield >>