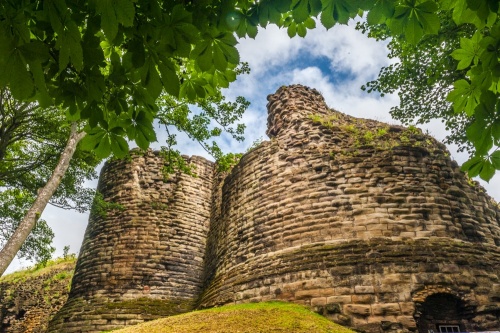 Pontefract Castle was a symbol of royal power and dominance in northern England for almost 500 years. The first castle here was built by Ilbert de Lacy, a Norman lord who was granted large estates in Yorkshire by William the Conqueror. These estates were known as the Honour of Pontefract, and de Lacy administered his lands from his new fortress.

But why did de Lacy choose this location? One story says that William the Conqueror himself first saw the strategic advantages of the site during his ferocious Harrying of the North. The name Pontefract is a combination of two words meaning 'bent' or 'crooked' and 'bridge'.

But the castle site is well away from the River Aire; the nearest site of a 'crooked bridge' must be two miles away from the castle location. The answer may be that an important Saxon town already existed on the site, and of course, the high ground offered a naturally strong defensive position.

The Saxons had a royal burgh here called Tanshelf, and the castle overlies part of the Saxon town walls. The high ground selected by Ilbert had been used as a Saxon cemetery from the 8th to the 10th centuries.

The first castle was a very simple motte and bailey structure; a high mound of earth with a timber palisade on top, surrounded by an outer wall of timber. Before the end of the 11th century, a stone chapel was erected within the bailey enclosure, dedicated to St Clement. This chapel may have replaced an earlier Saxon church on the site. It was initially a very simple single-cell building, but in the late 12th century an apse and nave were added. 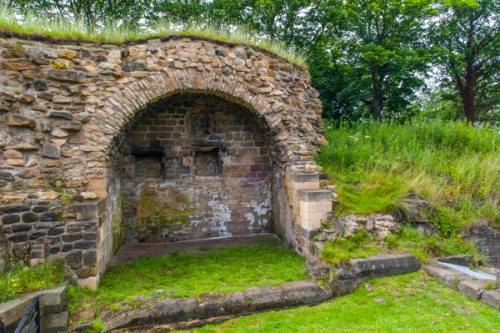 Over the course of the 12th century, the wooden castle was gradually rebuilt in stone. The heart of the castle would have been the Great Hall, but only the vaulted cellars of the hall remain.

In 1311 Alice de Lacy married Thomas, Earl of Lancaster, and Pontefract passed into Lancastrian hands. Thomas did not long enjoy his new possessions however; he organised a rebellion against Edward II in 1322. The culmination of the rebellion came at the Battle of Boroughbridge, where Edward's troops were victorious.

Thomas was held prisoner in his own castle, tried for treason, and a sentence of death was pronounced by the king himself. He was executed on a nearby hilltop. Due to the nature of his death (and the unpopularity of the king), Thomas's tomb at Pontefract Priory became a place of pilgrimage and Thomas a candidate for sainthood.

In an interesting historical side note, one of Thomas's supporters was one Robert Hode of Wakefield. When his lands were seized for his part in the rebellion Hode went into hiding as an outlaw in the Forest of Barnsdale. Hode is often suggested as the real-life model for the popular stories of Robin Hood. 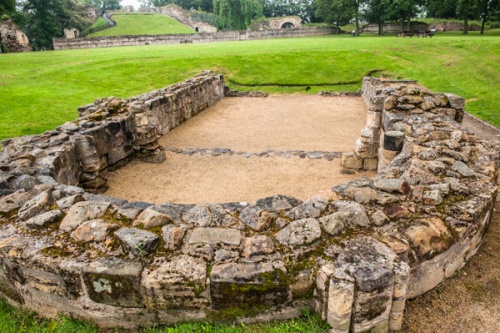 Remains of the Norman chapel

After Edward was deposed the Lancastrian estates were returned, and the castle was part of the Duchy of Lancaster from 1351. When Henry Bolingbroke, Duke of Lancaster, deposed his cousin Richard II in 1399 Pontefract became a royal fortress.

As the most important royal castle in the north of England Pontefract was used as a gaol for important (or politically dangerous) prisoners. The French Dukes of Bourbon and Orleans were interred here, as was James I of Scotland. The most famous prisoner to be lodged at Pontefract was Richard II, who was sent here after his deposition in 1399.

Richard died sometime before February the following year while a prisoner at Pontefract, and though the precise details of his demise are unknown, tradition says that he was starved to death, though he may simply have been murdered. Tradition suggests that the Gascoigne Tower is where the unfortunate king was held and where he died.

The Lancastrians used Pontefract as a base during the Wars of the Roses, and Richard III briefly resided here while Duke of Gloucester. After he ascended the throne in 1483 he had several political enemies executed at Pontefract. 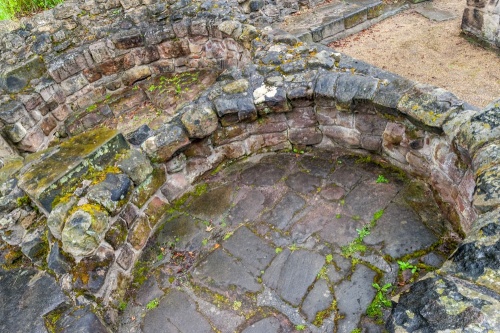 A bread oven in the Great Kitchen

Pontefract housed the principal royal armoury in Yorkshire. Due to its importance more money was spent maintaining Pontefract than on any other castle in the huge Duchy of Lancaster from 1485-1660. All that expenditure was not sufficient for the garrison to hold the castle against the Pilgrimage of Grace popular uprising in 1536.

The castle surrendered without a fight, the constable later claiming that the armoury was inadequate to defend his castle. After the uprising was quashed the castle was repaired, but when it was surveyed again in 1621 it was once more found to need repair to the tune of £3000, a huge amount for the time.

The castle needed those repairs, for it was about to suffer a trio of sieges that would test the resolution of its garrison and the strength of its defences. Though the Civil War sieges at Pontefract are often lumped together in historical accounts, there was not one siege but three.

The First Siege of Pontefract

As the principal royal castle in the north of England, Pontefract was a vitally important castle for the royalist cause during the Civil War, and an important target for Parliament. After the fall of York Parliamentarian armies under Sir Thomas Fairfax and Colonel Lambert moved on to Pontefract.

The siege began on Christmas Day 1644. The attackers were unable to breach the castle defences, and the siege had to be lifted on 1 March 1645 when Royalist forces under Sir Marmaduke Langdale won a victory at nearby Chequerfield. 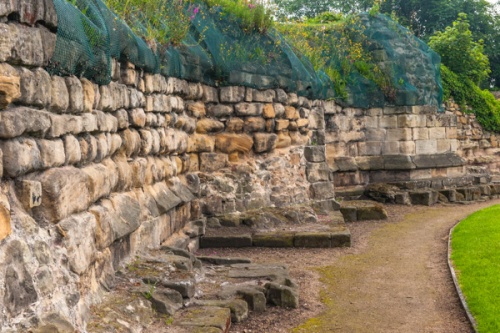 The site of the Royal Apartments

The Second Siege of Pontefract

But the Royalist success was shortlived; they simply lacked the armed might to enforce their victory. The second siege began on 28 March 1645 and went on for 4 months. The castle garrison finally surrendered and Parliament took control. But the castle garrison was about to suffer an unexpected reverse.

The Third Siege of Pontefract

On 3 June 1648 Royalist supporters under Captain W Paulden and Colonel Morris entered the castle in disguise. They surprised the defenders and seized control. So once more Parliament gathered an army and besieged the castle, beginning in October 1648.

The siege did not go well at first, and Oliver Cromwell himself arrived to take personal charge. However, he did not remain at Pontefract, returning to London to take charge of the trial of King Charles.

After Charles was executed on 30 January the garrison immediately proclaimed his son king as Charles II, and minted coins with the new king's likeness. These 'siege coins' were the first to be struck in Charles II's name, and included odd diamond-shaped coins, used to pay the troops. The town of Pontefract's official motto comes from this event; 'Post Mortem Patris pro Filio', or 'After the Death of the Father, we support the Son'.

By March 1649 Pontefract was the final Royalist stronghold in the country to stand against the Roundheads. The futility of their situation was obvious, and the garrison finally surrendered. The castle was slighted by Parliament to prevent it being used again for military purposes, and it is this ruined fortress we see today.

Cut into the bedrock beneath the original Great Hall are a series of chambers used to store gunpowder. During the Civil War, some prisoners were chained at the foot of the stairs in the Magazine, and you can see where they carved their initials on the wall. The magazine is regularly open to visitors for guided tours.

Pontefract Castle is administered by Wakefield Council. Entry is free to the visitor centre and castle grounds. There is however a charge for guided tours of the underground magazine.

The most visible castle remains are the keep, the chapel ruins, partial walls of the royal apartments, and parts of the Gascoigne Tower, Swillington Tower, and Constable Tower (1405). Just east of the castle walls is the striking shell of All Saints church, ruined during the siege.

More self catering near Pontefract Castle