HERITAGE HIGHLIGHTS:   The Shambles, part dating to the 16th century 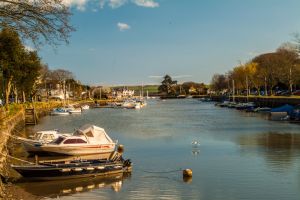 A lovely market town and popular boating centre in the South Hams area of Devon. A tidal estuary links Kingsbridge with Salcombe, on the coast. The High Street boasts some interesting medieval buildings, including the arcaded, half-timbered building known as The Shambles, which is raised up on pillars. The Shambles was built in 1796 but retains 16th-century piers from an earlier market hall.

The town takes its name from an old bridge linking the royal estates of Chillington and Alvington. The bridge was established by the 10th century. The town gained a market charter in 1219 and became a borough in 1238. Throughout the medieval period, the manor of Kingsbridge was owned by the Abbey of Buckfast.

The prosperity of Kingsbridge was traditionally based on the weaving trade, but by the Victorian era an active shipping industry grew up, with tanning and shipbuilding making the harbour area a bustling place.

Today Kingsbridge is popular for leisure boating and offers an opportunity for water sports and coastal walks. The town has very good access to lovely beaches such as Hope Cove and Slapton Sands.

A chapel stood on this hillside site in the early 13th century. Then in 1414, a new church was built, but the church retains some features of the earlier building, including a 13th-century font and a crossing tower of the same date. Parts of the medieval rood screen were used to make the reader's desk and pulpit.

One of the best memorials is a marble monument to the wife of Major Hawkins, who served in the East India Company. The church is usually open to visitors during daylight hours.

Another place of interest is the Cookworthy Museum, named for William Cookworthy, a Kingsbridge native who popularized the use of china clay. The museum is housed in the Old Grammar School and has displays of fine porcelain and other pottery items.

More self catering near Kingsbridge >>

More bed and breakfasts near Kingsbridge >> 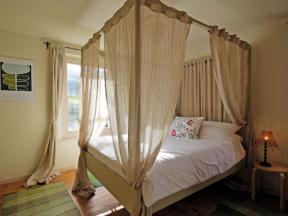 The South Hams offer everything and more on a holiday to Devon. Whether you want to explore rugged Dartmoor or amble along the coast path on the stunning south coast …
Sleeps 4 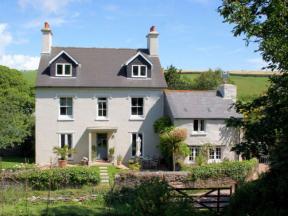