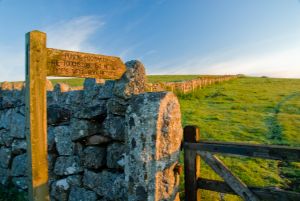 Footpath across the moor near Princetown

The administrative centre of Dartmoor National Park, Princetown is the highest town on Dartmoor. It is also home to the infamous Dartmoor Prison, originally built to house French prisoners of war during the Napoleonic Wars.

Prisoners captured in the war with France were initially housed in prison hulks; derelict ships. Living conditions were dire, and the proximity of prison hulks to the dockyards at Plymouth was considered a security risk.

In 1806 a purpose-built prison was begun at Princetown, in the isolated moorland of Dartmoor. The prison site was given by the Prince of Wales and is still legally the property of the Duchy of Cornwall, owned by the current Prince.

The first French prisoners came here in 1809, and they were quickly joined by Americans taken in the War of 1812. At its height, the prison held over 8000 inmates. After both conflicts ended the prison was unused until 1850, when it was put to use as a convict gaol and later, a prison farm. In 1917 it was converted into a work centre for conscientious objectors, then in 1920, it was put back into service as a prison.

A rather peculiar annual event called the 'Dartmoor Jailbreak' encourages members of the public to 'break out' of gaol and travel as far as possible in 4 days, to raise money for charity. 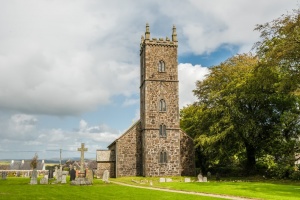 This striking church stands in an exposed position near Dartmoor Prison. It was designed by Daniel Alexander and used French prisoners as a labour force to begin the church, and prisoners captured in the War of 1812 conflict with America to complete the building. It is the only church in England to be built by prisoners of war. For another look at a different sort of church built by POWs see our article on the Italian Chapel in Orkney.

The church closed in 1816 after the prison ceased to hold POWs, but it reopened in 1831 to serve the local community. The east window holds a stained glass design commemorating American prisoners who worked on the building, and many prisoners are buried in the churchyard. The church was made redundant in 1995 but it is still used for occasional services. It is cared for by the Churches Conservation Trust.

Princetown began as a planned settlement, built in the late 18th century to house workers at Sir Thomas Tyrwhitt's quarrying operations at nearby Tor Royal. After the closure of the prison in 1816 the town faced collapse, but the coming of the railway in 1823 brought increased prosperity and an influx of workers for the granite quarries.

The Two Moors Way long-distance trail leads through Princetown, joining Dartmoor with Exmoor to the north, making the town a good centre for walking. 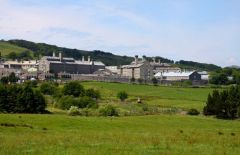 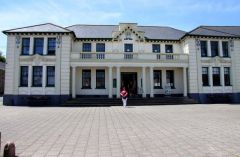 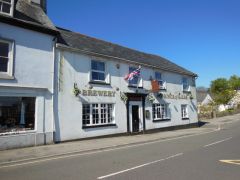 More self catering near Princetown >>

More bed and breakfasts near Princetown >>