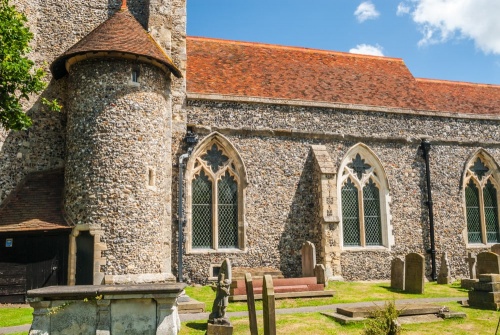 A small church with historical associations to kings, martyrs, archbishops, and chancellors, St Dunstan's Church stands at the western end of St Dunstan's Street, a few minutes stroll from the historic West Gate to Canterbury.

After King Henry II's conflict with Archbishop Thomas a Becket led to the latter's murder in Canterbury Cathedral, Henry performed a public penance.

On 18 July 1174, King Henry rode to the outskirts of Canterbury, where he stopped at St Dunstan's church, donned penitential garments, and removed his shoes. From here he walked barefoot to Becket's cathedral where he was scourged by the monks.

Three and a half centuries later and St Dunstan's once more played a part in the nation's history. Thomas More, then one of the most powerful men in the realm, was executed in 1535 for his refusal to bow to Henry VIII's claim to be head of the church in England. 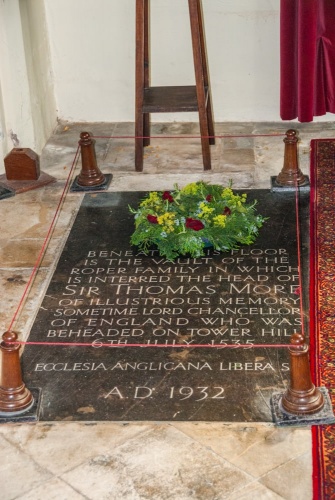 After More's death, his head was brought here by Margaret Roper, his daughter. There is a head, of approximately the correct age, in the Roper family vault beneath St Nicholas Chapel, otherwise known as the Roper Chapel. Is it Thomas More's? We don't know for sure, but it seems quite possible.

In 1935 More was canonised, and St Nicholas' chapel became a place of pilgrimage.

St Dunstan's Church was founded by Lanfranc, Archbishop of Canterbury, at the end of the 11th century. It was certainly the first in England to be dedicated to St Dunstan.

You enter St Dunstan's by way of the 17th-century south porch. Nearby is the vestry, initially a chapel founded in 1330 by Henry de Canterbury, chaplain to Edward III.

Also at the west end is the font, a plain design that probably dates to the early medieval period. It is surmounted by an elaborate 15th-century wooden cover. Beside the font is an attractive ancient wooden chest for storing parish documents and other valuables.

The bells are worth noting; there are six of these, and the fifth dates to the 14th century. The nave and chancel exhibit details from the Early English, Decorated, and Perpendicular phases of Gothic. 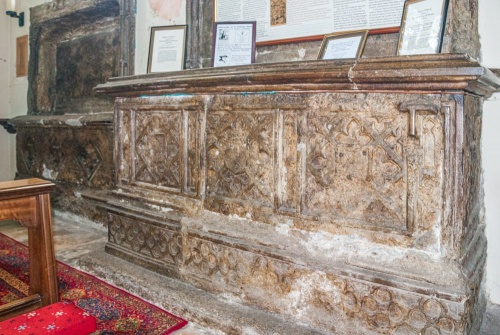 St Nicholas Chapel (The Roper Chapel) is the highlight of any visit to St Dunstan's. It was created in 1402 as a chantry for 'John Roper, his parents, friends, and benefactors'. It is unusual in that it uses brick for a late Gothic structure, unlike the more common stone.

The Roper family vault is beneath the chapel floor, and it is here that the head of St Thomas More is stored. Aove ground is the altar table, a fine Elizabethan piece of furniture.

A few hundred yards down St Dunstan's Street is the Roper Gate, a Tudor gateway that is all that remains of Place House, home of William Roper and his wife Margaret, daughter of St Thomas More.