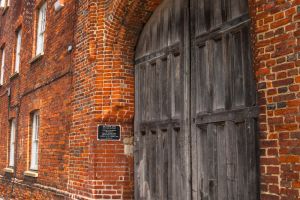 The Roper Gate is a decorated 16th-century gateway that once provided an entrance to Place House, home of William Roper and his wife, Margaret Roper, daughter of Sir Thomas More. The gate is a wonderful example of decorative Tudor brickwork. Nothing now remains of Place House beyond the gateway.

The gate is a four-centred arch, surmounted by a stepped gable rising in five levels. The gable is pierced with a three-light window, above which is a small roundel window. The gateway is further decorated with diamond 'diapering'.

Though the gate is on the north side of St Dunstan Street, you might need to cross over to the south side to get a really good view to appreciate the decorative brickwork of the structure.

When More was executed for treason by Henry VIII, Margaret Roper was granted permission to take her father's head. This head she stored in the Roper family vault in St Dunstan's Church, just a few yards further along St Dunstan Street, where it became a destination for pilgrims, particularly following More's elevation to sainthood in 1935. 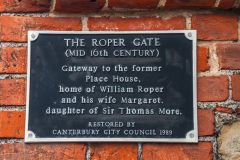 More self catering near Roper Gate >>