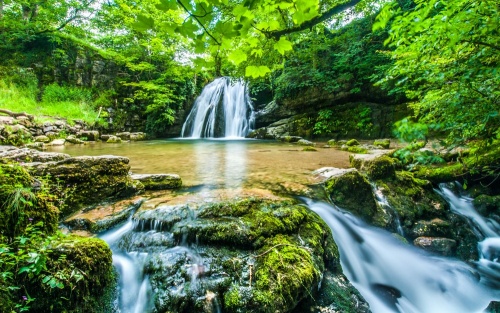 Janet's Foss is a popular waterfall and beauty spot on the southern edge of the Yorkshire Dales. Local stories say that a faerie queen named Janet (or Jennet) lived in a small cave behind the waterfall.

Janet's Foss is formed as Gordale Beck falls down over an area of limestone tufa, to a broad pool below. Moss growing on the edge of the falls has gradually been covered in limestone deposits, creating a wide lip over which the water flows.

Just opposite the falls is a small cave thought to have been inhabited by copper miners working at the nearby Pikedaw mines. The pool at the foot of the Foss was used by local sheep farmers to wash their flocks, an event with a bit of a carnival air, known as 'sheep dipping'.

The word 'foss', or its alternative, 'force', is from the old Norse for a waterfall, and is often used for waterfalls in the Yorkshire area.

More self catering near Janet's Foss >>