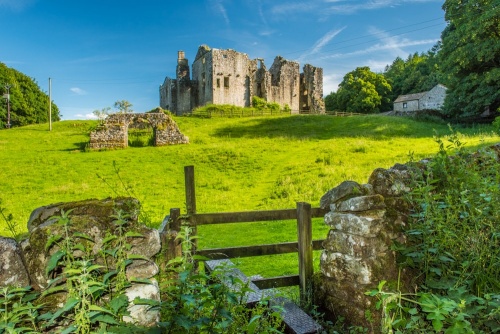 Barden Tower is a medieval fortified manor house beside the River Wharfe on the eastern fringes of the Yorkshire Dales. The Tower was built in the 15th century by Henry Clifford to replace an earlier hunting lodge.

The story begins several centuries earlier, just after the Norman Conquest. At that time hunting deer and wild boar was a popular pastime for nobles. Shortly after the Conquest the Honour of Skipton, a large area of forest, was given to Robert de Romille, a Norman lord.

The Honour of Skipton included Barden Forest. It was presumably Romille who built a hunting lodge at Barden to take advantage of the sport offered in the nearby forest.

Barden Tower was also used to hold Forest Courts, administering justice for the area. It became a place of refuge when the area was raided by Scots in the 14th century. 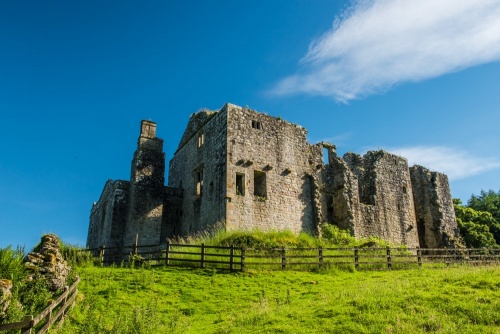 The Tower from the north

And so it remained until the 15th century when Henry Clifford appears on the scene. Clifford was known as The Shepherd Lord, a name that requires a bit of background history to explain. Henry's grandfather Thomas Clifford and his father John Clifford both fought for the Lancastrian side in the Wars of the Roses. Thomas was killed at the First Battle of St Albans in 1455 and John died at the Battle of Towton in 1461.

Henry's estates were seized, and his mother not surprisingly feared for his safety. She sent him into hiding in a remote area of Cumbria, where he was disguised as a shepherd to protect him from his Yorkist enemies. He only returned when Henry Tudor's triumph at the Battle of Bosworth cemented the Lancastrian victory and his estates were restored to him.

The new Tower was part of a complex of buildings that included a Chapel and a Priest's House, all encircled by a curtain wall. Clifford had a keen interest in astronomy and he used the upper dining room as an astronomical observatory, known locally as the 'Stargazers Room'.

Clifford led men from the Craven district in combat at the Battle of Flodden in 1513, though he was 60 years old at the time.

Clifford probably never thought the Tower would be subject to a serious assault. After the Wars of the Roses, the need for castles as defensive strongholds was lessened and most houses were built with comfort as much as defence in mind. 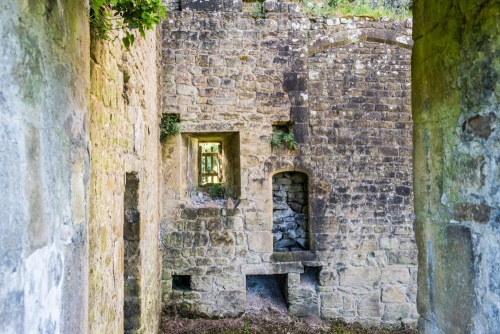 Looking into the ruined interior

If that was Henry Clifford's reasoning, however, he was proved wrong, for in 1536 Barden Tower was captured by rebels during the abortive Pilgrimage of Grace, a futile attempt to overturn Henry VIII's reforms of the English church.

Though the Tower was repaired after the Pilgrimage of Grace was crushed, the Clifford heirs preferred other houses and the Tower was allowed to gradually decay.

In 1589 Margaret, Countess of Cumberland stayed here while pregnant with her daughter, the formidable Lady Anne Clifford, of whom more in a moment.

Though Barden Tower played no part on the Civil War, its curtain wall was pulled down after the conflict so that it could never be used for military purposes.

The next major player in the history of Barden Tower was Lady Anne Clifford. This remarkable woman was deprived of her inheritance by her uncle and spent over 30 years pursuing her claims to the Clifford estates through the court system.

She eventually emerged victorious, and came into possession of Barden Tower in 1649. She restored the Tower and added an L-shaped tower to the original medieval structure. It doesn't appear that she ever lived permanently at Barden - her main residence was at Appleby Castle in Cumbria - but she certainly stayed at Barden during her regular progresses amongst her various estates in the north of England.

Unfortunately, this restoration proved only a temporary respite. Lady Anne's heirs allowed the Tower to lapse once again, though it was used briefly to store weapons for the local militia during the Jacobite Rebellion of 1745.

Near the end of the 18th-century, lead was removed from the roof and the roof timbers were taken out, leaving the Tower to crumble into ruin. It is now owned by the Dukes of Devonshire. 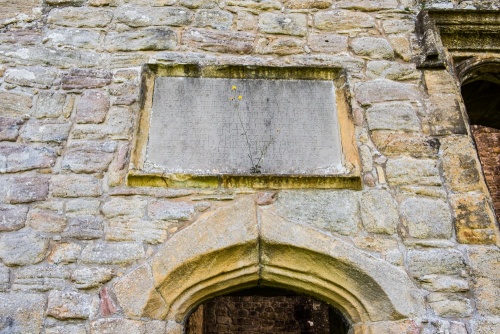 The original 15th-century tower stands three storeys high and is laid out as a rectangle. On the north-west corner is Lady Anne Clifford's L-shaped addition.

You can't access the Tower interior as it is unsafe due to the risk of falling masonry but it is easy to walk around the exterior and you can get a very good look into the building interior from several large ground-level windows and you can pick out several restored fireplaces and chimney stacks.

Over the entrance is a worn stone plaque commemorating the Tower's restoration by Lady Anne Clifford. The plaque reads, in very archaic language:

This Barden Tower was repayrd by the Ladies Anne Clifford Countesse Dowager of Pembrookee Dorsett and Montgomery Baronesse Clifford Westmerland and Veseie Lady of the Honor of Skipton in Craven and High Sherifesse by inheritance of the Countie of Westmerland in the yeares 1658 and 1659 after it had layne ruinous ever since about 1589 when her mother then lay in itt and was greate with child with her till nowe it was repayred by the sayd Lady, Isa. Chapt. 58. Ver. 12. God's name be praised! 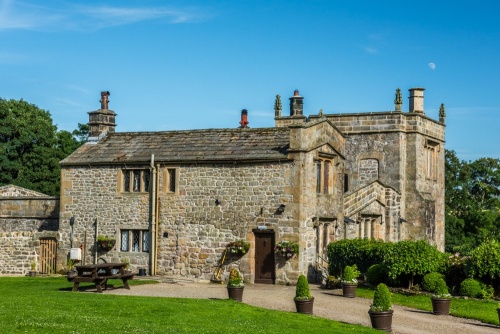 The medieval Priest's House and Chapel

What makes Barden Tower so enjoyable to visit is the location. The Tower stands in green fields with only a few old buildings nearby - now used as a restaurant and wedding venue. The location overlooking the River Wharfe is simply beautiful.

Barden Tower is directly on the B6160 three miles north of Bolton Abbey. The medieval Priest's House is now a restaurant and there is free parking for restaurant patrons. If you aren't planning on eating at the restaurant there is an easy and free alternative. Immediately past the Tower take the minor road off to the right signposted to Appletreewick.

Cross Barden Bridge, built in 1659, and you will see a large layby on the left. Park in the layby and walk back across the bridge. Do take care as you walk up the lane from the bridge to the Tower as there is no verge and car's won't easily see you coming.

The long-distance Dales Way runs along the east bank of the River Wharfe just opposite Barden Tower. 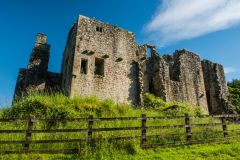 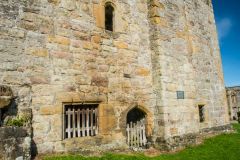 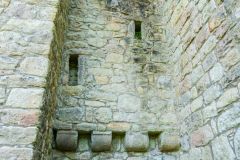 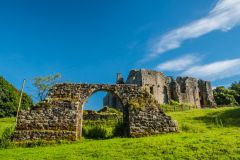 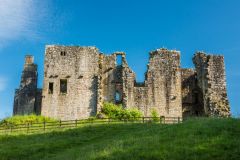 More self catering near Barden Tower