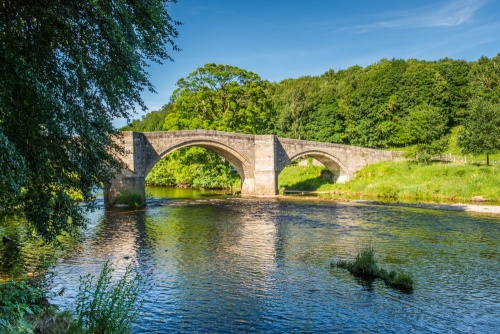 Barden Bridge is an attractive three-arched humpbacked bridge across the River Wharfe north of Bolton Abbey on the eastern edge of the Yorkshire Dales. The bridge crosses the river just north-east of Barden Tower, a 15th-century fortified manor house.

There is a free parking area on the west side (left) of the minor road leading north towards Appletreewick.

This area is part of the Bolton Abbey estate and there are permissive footpaths along the east bank of the river.

The bridge was erected in 1659 at a cost of £300 and is built of ashlar blocks. There are large triangular cutwaters on the upstream side to minimise the force of the rushing water. The top of the cutwaters creates small pedestrian retreats so that it is relatively safe to walk across the bridge.

On the north side of the east end of the bridge is an inscription reading 'this bridge was repayred at the charge of the whole West riding 1676'.

The date refers to the fact that the original 1659 bridge was swept away in a flood in 1673 and had to be rebuilt. The parapets had to be renewed in 1856 and again in 1956 after flood damage.

The bridge we see today dates from the 17th century but there was certainly a bridge here as early as the 14th century, and probably much earlier than that. 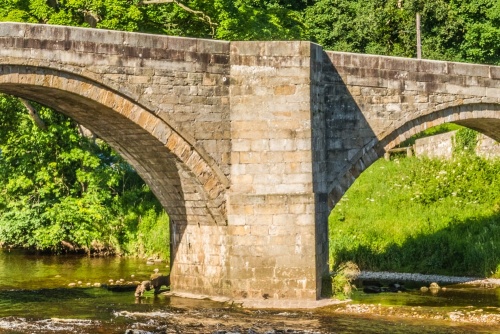 One of the triangular cutwaters

The bridge is very narrow, with an opening of only 10 feet (3m) which naturally means that only one vehicle at a time can drive over it.

The bridge is a Scheduled Ancient Monument and is a listed Grade II building. An old story - very likely true - says that Barden Bridge was used by William Craven (1548 – 1618), the son of a local farmer from Appletreewick who went on to become Lord Mayor of London.

If the story is true, it cannot be this bridge that Craven used, for it wasn't built until after his death, but he would certainly have used the earlier medieval bridge that it replaced.

The bridge is extremely easy to find. Head north from Bolton Abbey on the B6160 towards Burnsall. As you come to Barden Tower on your right there is a minor road to Appletreewick off to the right. Take this road, which goes around a sweeping right-hand curve and almost immediately crosses the bridge.

There is no easy place to stop on the west side of the river so simply drive across the bridge and you will see a large layby on the left, with room for quite a few vehicles. From the parking area, you can easily walk back to the bridge or simply get a good look from the riverside. I highly recommend seeing Barden Tower while you are there.

If you follow the Dales Way long-distance footpath south along the river and cross over to the west bank you will come to The Strid, a picturesque gorge.

More self catering near Barden Bridge