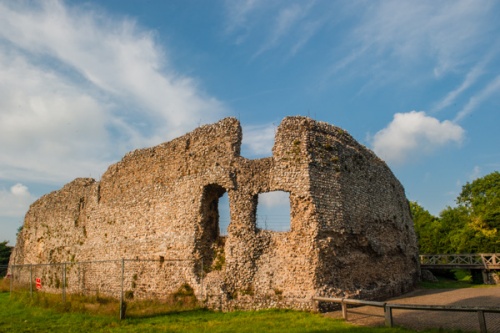 Eynsford Castle
Eynsford Castle is a Norman castle of the 'enclosure' type, built roughly 1085-87 with encircling curtain walls. Most early Norman castles followed a motte and bailey plan of a wooden palisade atop a raised mound, surrounded by an enclosed bailey, or courtyard.

By contrast, Eynsford Castle consists of a simple enclosing wall around an inner cluster of buildings, reached by a drawbridge across a shallow moat. There was no central keep or tower, and all the important accommodation was on the first floor of the hall building. There was an outer bailey, or enclosure, to the south-east, but no excavations have been done in this area and we do not know what buildings might have stood there.

The castle was built in 1085-7 by William de Eynsford, who served as Sheriff of Kent. It is built on top of an earlier Saxon structure. The castle was enlarged a century later, at which time a great hall and further domestic buildings were constructed within the walls. A gatehouse was added, and the walls raised and strengthened. There was no central keep; rather, the main domestic quarters were arranged on the first floor of the hall. 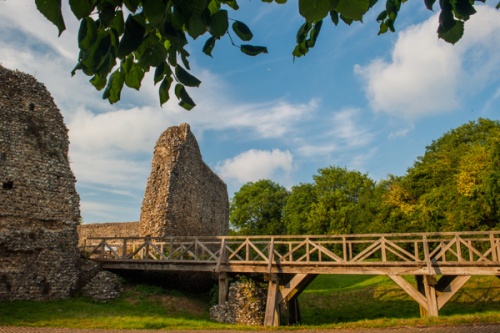 The bridge across the moat

There are a pair of undercrofts in the hall. One was used for storage, but the other constituted a rather posh solar; a self-contained living area complete with living quarters, garderobe, and fireplace. This separate apartment may have been used by the castle bailiff.

The hall was expanded in the 13th century with the addition of a separate forebuilding, but early in that same century, the building was badly damaged by fire. When the damage was repaired a new kitchen was built to serve the hall and private apartments.

At the far left of the site are the foundations of the well, and kitchen block, built between 1150-1175. This remained in use until the castle was abandoned after 1312. Kitchens were always kept separate from living quarters due to the risk of fire. Remains of three garderobes (latrines) can be seen built into the thickness of the walls. These would have emptied directly into the moat. 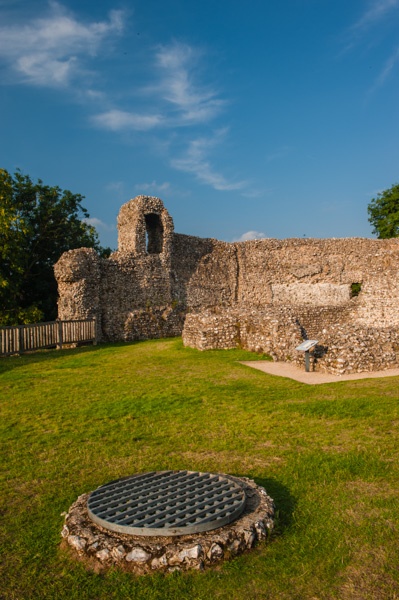 The well and north enclosure wall

The early history of Eynsford Castle was largely taken over by squabbles between the neighbouring families of Kirkeby and Criol. In 1261 the castle and estates were divided between the families, and they constantly fought over their respective rights.

In 1312 the Kirkeby's sold the castle to Judge William Inge. A band of men under Nicholas de Criol broke into Eynsford Castle and ransacked it. The castle seems to have been abandoned after this act of vandalism.

After passing through many hands the castle was purchased by the Hart Dyke family, who also owned Lullingstone Castle. The Hart Dykes used Eynsford for stabling their horses and as a kennel for their hunting dogs.

In 1835 architect Edward Cresy was brought in to clear the ancient site of modern buildings. Cresy made an extensive survey of the castle and began to rebuild the original structure. However, in 1872 a section of the curtain wall collapsed. This exposed the original Norman mound inside the wall. This can best be seen from the far (north) side of the castle enclosure, where a concrete retaining wall has been inserted to secure the site. The retaining wall has been marked to show the excavated layers of the mound. 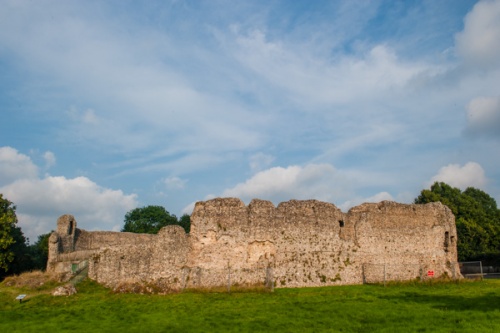 The castle walls and moat from the west

The castle is technically signposted, but honestly, you'd have to be travelling south and be looking in just the right spot to see the sign. We weren't, so we didn't (if you follow me). It took several attempts to find the small lane on the north side of the A225 that leads to a small parking area beside the castle. The entrance to the lane is almost directly opposite the Castle Hotel (a clue, I suppose).

Now that I've had my rant, let me say that I enjoyed the castle enormously. It won't take long to explore the site, but there is plenty of interest if you enjoy medieval castles. The enclosure layout is different from the more typical motte and bailey Norman plans and is rather fascinating. What makes Eynsford Castle so interesting is that the design was scarcely altered after the 12th century.

Access is by a bridge across a dry moat, leading through a ruined gatehouse area into a circular enclosure bounded by high walls on most of the site. To the left of the entrance are three large openings which were probably used as garderobes - sort of a communal privy by the look of it. At the far left are the foundations of the later kitchen, near a well-protected by iron bars.

The entire right side of the site is taken up by the ruins of the hall and kitchens. But when I say 'ruins' that might give the wrong impression; there's actually quite a lot of the hall and its subsidiary buildings still intact. That was one of the impressive features of the castle for me; that so much of the hall still stands.

You can see remains of a spiral stair in one corner, and parts of a fireplace. But the most impressive part of the castle are the walls, which are really very impressive and really emphasize just how different Eynsford is to a 'normal' Norman castle.

This castle is well hidden and is almost like a feature in a public park. People walk their dogs in and around it. It's a Norman castle of the no-keep variety, where the whole castle basically fulfils that purpose. Originally, it was moated, with the water reaching right to the flint-and-mortar curtain wall (unusual for Normans). A "No Fishing" sign remains by the dry ditch (yes, it really does).

The curtain wall once rose to an impressive height, but it has collapsed on one side, and the mound has been shored up by concrete. Within is a small lawn with a few buildings, mostly just foundations. The kitchen and hall cellars are the most complete. Eynsford Castle had a very short life as a castle.

It was built in 1085, soon after the Norman conquest, and abandoned in 1312, due to vandalism during a local property dispute. Not a siege or battle with invaders, just angry neighbours. Just as well it never faced a siege. 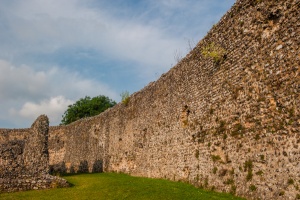 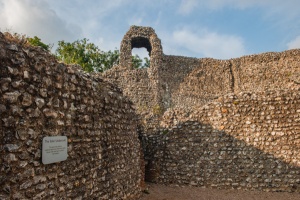 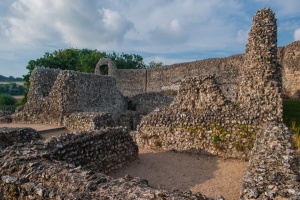 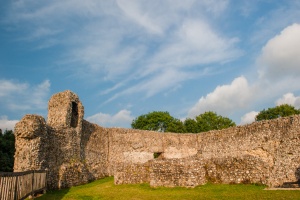 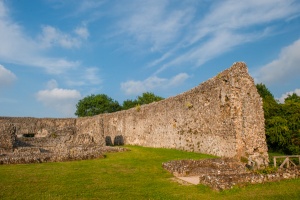 More self catering near Eynsford Castle >>