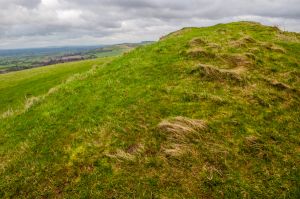 Bratton Camp is an Iron Age hillfort on Bratton Down, with two ditches and banks enclosing an area of 25 acres. At the centre of the site is a Neolithic long barrow, which predates the hillfort by up to 2000 years.

The hillfort is 430 metres in length, 300 metres at the east end, tapering to 120 metres at the west end. The enclosing double ditch and bank is up to 30 metres wide, and 6 metres high. The possible site of the original entrance is located on the northeast side.

Within the enclosure is a Neolithic long barrow (Bratton 1). This is a large mound 73 metres long and over 17 metres wide. Three skeletons were found within the mound, though these were likely later Saxon interments.

Bratton Camp, otherwise known as Bratton Castle, was first excavated in 1775, making it one of the very first sites in Wiltshire to undergo an archaeological examination. At that time a number of Saxon and Roman coins were found near the site. In the early 19th century a local schoolteacher reported finding quern stones and large pebbles, or sling bullets, in the Camp earthworks.

Near the southern entrance to the hillfort is a Bronze Age round barrow (Bratton 7a), located between the inner and outer ramparts. When the barrow was excavated in the 18th century a secondary Saxon burial was found, with an axe and sword.

On the western slope of the down, just below the ramparts of the hillfort, lies the imposing Westbury White Horse, a chalk figure dating to 1778, which replaced a much earlier chalk figure that may have dated to the Saxon period.

There is a free parking area, accessed by minor roads from both Bratton and Westbury. 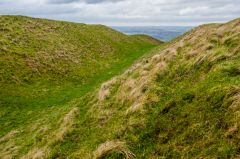 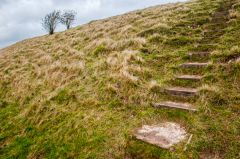 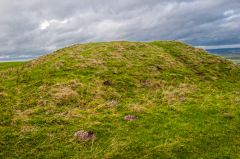 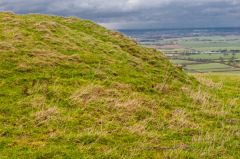 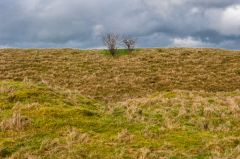 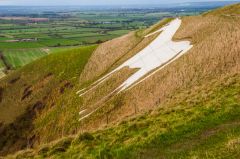 More self catering near Bratton Camp >>