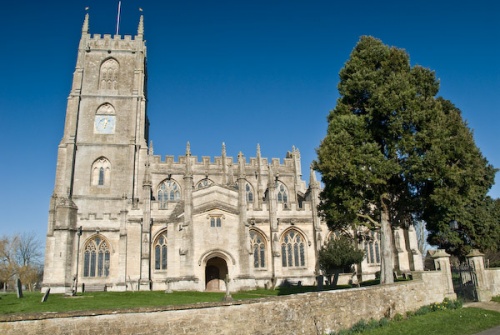 St Mary the Virgin Church in Steeple Ashton is an extraordinary building, described by author Simon Jenkins (England's Thousand Best Churches) as a 'fairy castle'). It is perhaps one of the finest examples of Perpendicular Gothic architecture in England. Hang on, scratch the 'perhaps'; it IS one of the finest examples of this style of medieval architecture. It is an architectural gem and has been awarded a Grade I listing as a historic monument.

The church consists of a nave with clerestory, chancel, north and south aisles, north and south porches, and a four-stage western tower embellished with crocketing and pinnacles. The church is first recorded in 1281, in terms that suggest it was in existence long before then.

The embattled tower dates from the early 15th century. It was originally topped by a huge spire reaching 186 feet above the ground. The spire was struck by lightning in 1670, and again the following year, killing two workmen, and it was never replaced. Around the roofline are carved a number of fabulous gargoyles and other grotesque beings. 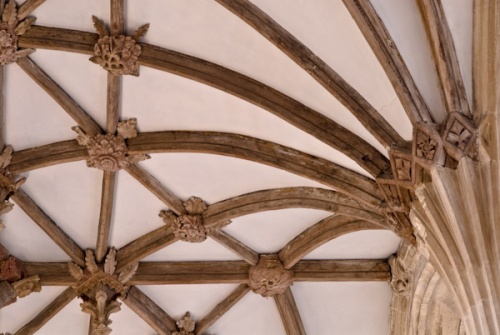 Lierne vaulting in the nave

The nave is extraordinarily bright and well-lit, with large clerestory windows creating a sense of spaciousness. There are fragments of medieval stained glass. According to a local tale the glass was broken in 1643 when Sir William Waller stabled his horses in the church following the Battle of Roundway. Within the church is the Hay Library of ancient books, the gift of a previous rector.

The stone vaulting of the chancel, chapels, and aisles is wonderfully performed in the lierne style. Strangely enough, the nave is done in wood. The aisle vaulting is supported on shafts descending to niches set into the wall thickness. At the end of these shafts are carved figures of wonderful craftsmanship and variety. The church is entered by way of the south porch, on the outside of which is a large sundial.

The church is located within one of the most attractive villages in northern Wiltshire. The village of Steeple Ashton is remarkable for its large number of cruck-framed and thatched houses, with a wide variety of periods and styles represented.

In the medieval period, the village was part of large estates owned by Romsey Abbey, and the abbey courts for this area were held here. The prosperity of the village was based upon the cloth industry, which faded in importance following the 16th century. That helps explain in part why such a small village can boast such an extraordinary church.

St Mary's church is well worth a visit; it is a wonderful example of an ebullient period of English architecture.