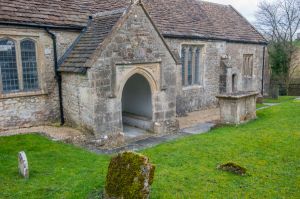 The approach to this lovely little church beside the River Biss is under a railway arch. The church itself dates to the 14th century, but it has a very Georgian character, thanks to extensive 18th-century remodelling.

The west spire is quite amazing, unlike any I have seen before; it looks for all the world like a miniature rocket about to lift off. One striking external feature is a blocked doorway on the north wall, which has an unusual trefoiled head. The building is very simple, with a nave, chancel, south porch, and north aisle, plus the aforementioned spire.

The interior is a Georgian time-capsule, with box pews crowded together, overlooked by a three-decker pulpit and two galleries. Some of the pews have been built on top of medieval benches and you can see medieval panels reused for the ends of the box pews. There is a very nice 17th-century communion table, much longer than is usual. 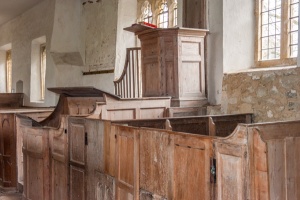 The Georgian box pews and pulpit

One of the two galleries was at one time used as a schoolroom, a features a fireplace intended, no doubt, to keep the schoolmaster and pupils warm. There is a matching fireplace in the vestry below, and the vestry also contains an odd bench shaped like a coffin. The font appears to be 15th century, but it is actually a Victorian copy.

Most of the glass is clear, but there are several fragments of 15th-century glass gathered in the window closest to the pulpit.

The interior is remarkably clear of memorials. On the south nave wall is a memorial to William Budd (d. 1766), and there are two other 18th century monuments; to William Grant (1769) and Edward Line (1744). Over the chancel tympanum is a royal coat of arms to George III.

One lovely touch is a benefaction board in the nave, which records a gift of John Wilkins, who founded a charity providing woollen cloth to make coats for the poor. Under this board are traces of wall There is an 18th-century painting of the Lord's Prayer on the north wall of the nave aisle.

The church was used until 1844 when a new church was built at Dilton Marsh. St Michael's fell out of regular use and is cared for by the Churches Conservation Trust. There are still occasional services, notably at Advent and a Harvest Thanksgiving. There is a keyholder just down the lane if the church is closed. It was locked when we visited, but it was a simple matter to fetch the key. 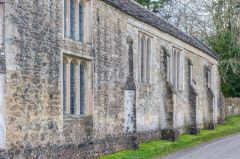 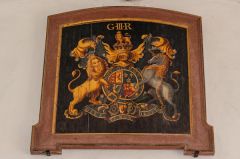 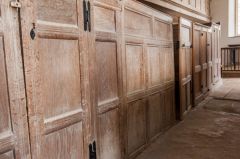 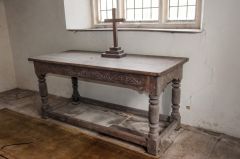 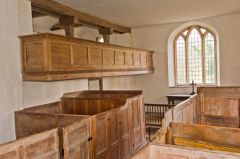