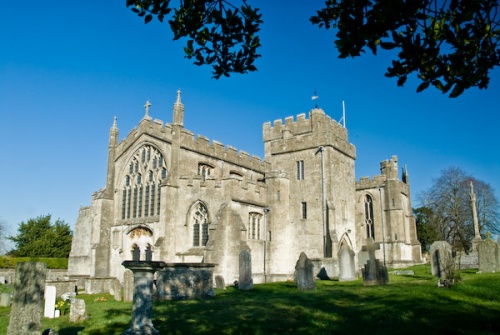 The Wiltshire village of Edington is best known as the site of the battle where Alfred the Great famously defeated the Danes under Guthrun in 878 AD. It is a much more peaceful and prosperous village now, and nothing illustrates this prosperity more than the wonderful parish church dedicated to St Mary, St Katherine, and All Saints.

Edington church is unusual in that it was completed in a very short length of time (1352-61) and has remained largely unaltered since that time. It is one of the finest examples in the country of the transitional period between Decorated and Perpendicular Gothic architecture.

The church was founded by William of Edington, Bishop of Winchester, who chose his own birthplace as the site of a new religious house for the Bonshommes (literally 'Good men'), an order which followed the Augustinian rule. The church was built upon the site of an earlier 10th-century church, of which no trace now remains. After the Dissolution of the Monasteries under Henry VIII, the church continued to serve as the parish church for the village of Edington. 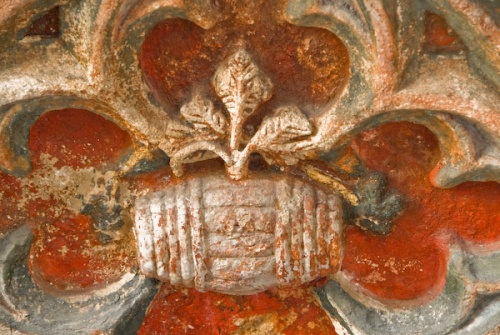 A medieval visual pun, symbolizing the name 'Baynton',
on the 15th-century Baynton tomb

The church is set on the slope of the chalk downs which make up Salisbury Plain. The building is cruciform in plan, with battlements all around and a central tower. The south porch is a quite magnificent three-storey structure with a stair turret in the south-west corner.

The font is 17th century, upon a medieval base. At the west end of the south aisle are several medieval tombs and stained glass rescued from the church at Imber when that building was evacuated to make room for the military occupation of Salisbury Plain.

Also in the south aisle, just behind the choir stalls, is a monument to Sir Ralph Cheney (d. 1401) of Westbury. This is in the form of a tomb chest of Purbeck marble with insets for funerary brasses. The Cheney memorial may originally have been a chantry chapel. 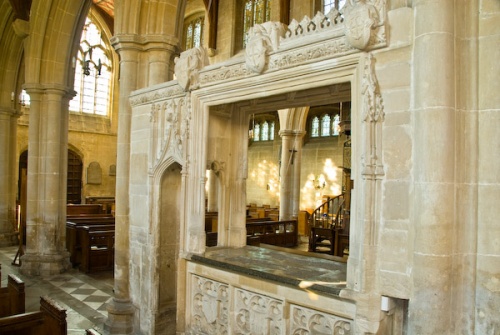 In the south transept is a wonderful painted memorial with the effigy of a monk, inscribed with the initials T.B. It would be logical to assume that he was one of the Bonshommes brethren who inhabited Edington, but that seems unlikely, as members of that order wore grey, while this monk is dressed in a blue robe.

We do not know for certain who the monk is, but it seems likely that his name was Baynton. The reason for our assumption is there are several carved and painted symbols on the tomb depicting a barrel with a tree emerging from it. This is probably a visual pun on the medieval terms 'Bay (tree) in tun (barrel of wine)'.

On the wall behind the Baynton monument and on the west wall of the transept are a variety of mason's marks, plus a nine men's morris outline.

On the south wall of the chancel is a magnificent tomb of Sir Edward Lewys (d. 1630) and his wife Lady Anne Beauchamp (d. 1664). On the front of the tomb chest are five figures of kneeling children, two sons and three daughters. All of the figures face east.

The workmanship is magnificent, but it is worth pausing to consider the extreme change in styles between the 15th century Baynton tomb and this, scarcely two centuries later.

There are fragments of 14th century stained glass, notably in the north clerestory and the north transept. The superb nave roof (1663) is worth noting. The 'vaulting' is plaster, but unusually, the plaster is not painted, but rather, it is pink all through. The crossing features more superb imitation fan vaulting in plaster.

In the chancel, the space between the windows is filled with canopied statuary niches, now empty. At the base of each niche are quite wonderful carvings, dating to about 1330. The pulpit dates from the 17th century. It was originally a three-decker but was subsequently cut down.

Taken as a whole, Edington church is one of the more enjoyable historic churches in this area, and well worth a visit.