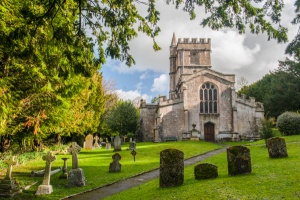 St James church is set on the slope of a combe, apart from the village of Bratton. Quite why it was built away from the village centre is a bit of a mystery. It was always the parish church of Bratton, but also served a small hamlet of Littlestoke, which has now disappeared. Littlestoke grew up between Bratton village and the nearby Iron Age hillfort of Bratton Camp.

Why did Littlestoke disappear? One theory is that most of the residents died of the plague, and when new houses were built, it was far away from the original site. It is equally likely that the villagers simply chose a more suitable site for their houses.

One interesting historical footnote survives from the years when the Great Plague ravaged England. In 1340 Margaret Fitzwarren gave 5 shillings to the chaplain of Littlestoke to say an annual mass 'for my soul and the souls of Reginald, late my husband, of John de Canterton, my father, and all mt freemen'. It would seem that Margery had lost her husband, her father, and villagers of the estate to the devastation of the plague. 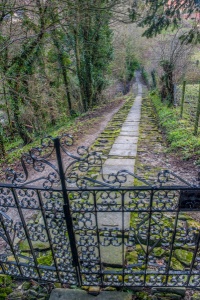 The path to the church

The church of St James is largely 13th century, in Early English style. There is a very striking 15th-century central tower with an unusual external stair turret. The tower is interesting, for it stands on the foundations of a Norman tower, which is older than any of the other parts of the church. On the south side of the tower is a painted sundial, dated 1801. The exterior of the church is ornamented by a wonderful array of grotesque carvings in the shape of strange beasts and birds.

Throughout the 16th-18th century there were disputes between Bratton and neighbouring Westbury churches. Westbury claimed that St James' was a chapelry of Westbury, while Bratton insisted that they were, and always had been, a separate parish church.

It was not until 1845 that the parish granted full independence. It was around that same time that the church, now in dire condition, was renewed, so that much of what we see inside the church today is the result of Victorian efforts.

Though much of what we see inside the church now is Victorian, there are certainly several interesting historical features. For one, the altar table was once a 17th century dining table. The nave and clerestory are 15th century, as is the west window. Both north and south aisles are also 15th century, with stained glass dating to 1860. set on the south aisle is a brass plaque to Sefton Bromwich (d. 1607). 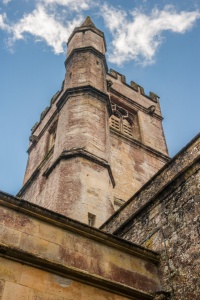 Nearby is a worn tablet bounded by carved leaves and flowers. The inscription is now worn, but originally commemorated Humphrey Whitaker, who died in 1725. On the wall beneath the Whitaker panel is a memorial to John Mansell (d. 1734). Even more interesting is a floor slab to Mary Long (1755), carved with the arms of the Long family. The Longs rented Bratton House from the mid-18th century.

The font is intriguing; at first glance, it appears too fresh and clean to be old, but appearances can be deceiving. It is actually a Norman bowl, set on a 15th-century base. It was recut in 1860, so that it now appears much newer. You can still see traces of a medieval iron hinge and lock, used to protect the baptismal water.

There are two ways to reach the church. You can follow Church Lane off the B3098 and park outside the churchyard, but if you have the time I recommend taking the footpath from the B3098 at the west end of the village. This leads down a set of stone steps, to the bottom of the combe, and then up to the churchyard. You really do get a sense of how remote and secluded the church must have seemed in days gone by. 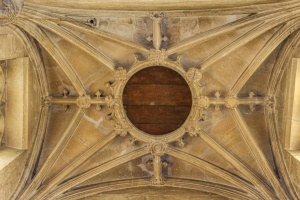 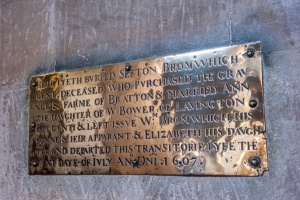 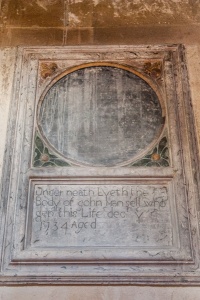 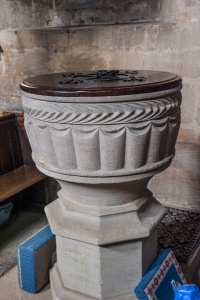 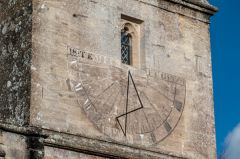 About Bratton
Address: Bratton, Wiltshire, England, BA13 4SY
Attraction Type: Historic Church
Location: At the end of Church Road, off the B3098, also by footpath off the B3098 at the western end of the village. Usually open daylight hours.
Location map
OS: ST914519
Photo Credit: David Ross and Britain Express

More self catering near Bratton

More bed and breakfasts near Bratton