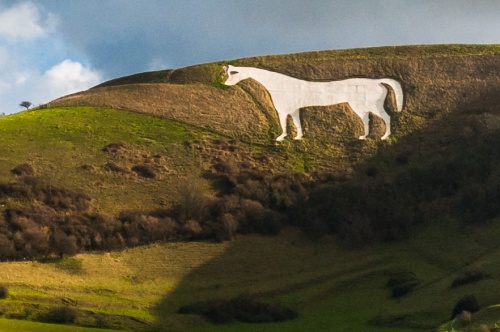 Westbury White Horse from the B3098

Wiltshire's best-known hill figure, cut into the slope of a hill beneath Bratton Camp Iron Age hillfort. Curiously, it is the only horse figure in the county to be shown standing still, rather than galloping. The horse measures 108 feet from nose to tail and stands 182 feet high.

The short answer is that we don't know, but it is most likely just over 300 years old. It is easy to assign a prehistoric - or at least a pre-Christian - date to hill figures, but most are of post-medieval origin. As for Westbury's horse, the first written records suggest that the horse was carved from the chalk slope of Bratton Hill in the late 17th century.

It is thought to commemorate King Alfred the Great's victory over the Danes at Ethandun (The Battle of Edington), which took place near Bratton Camp in 878AD. There are written records from 1742, but antiquarian John Aubrey, writing in the late 17th century, makes no mention of the horse, so it seems safe to assume that the horse was created after Aubrey and prior to 1742.

The Westbury White Horse is the oldest known hill figure in Wiltshire. It is such a well-known local landmark that the white chalk was covered by turf and brushwood during WWII to make it hard for German pilots to make it out from the air. 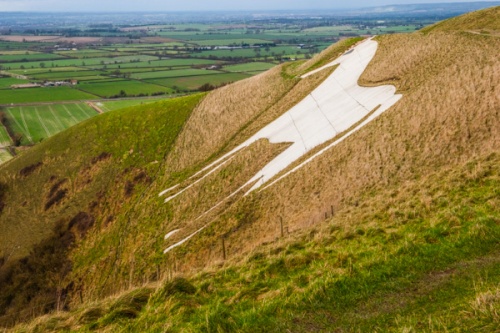 From the hillside viewpoint

Why a 'White Horse'?

Popular mythology during the 17th-19th century associated the Saxons with bringing Christianity to Britain. We're not quite sure how such a story developed, but it probably goes back to the oldest white horse in Britain, at Uffington, in Oxfordshire.

The horse was created by simply removing the turf to expose underlying chalk. The outline had to be regularly scoured to keep the white colour. Since the 1950s the white colour has been retained by using white-coloured concrete.

In 1778 the original horse was recut, perhaps under the direction of Mr Gee, who surveyed the parish for the Earl of Abingdon.

There are two ways to visit the white horse. One is via Newtown and Long River Road, signposted from the centre of Westbury. This leads up to Bratton Camp and a parking area inside the outer earthworks of the hillfort.

From the parking area, there is a level walk to an observation terrace with several benches and an information panel. You can walk right along the top of the horse and stand beside the horse's ear to look down the figure itself. However, to actually get the best view of the horse from straight on, your best bet is a layby and parking area on the north side of the B3098 at OS grid ST885516. 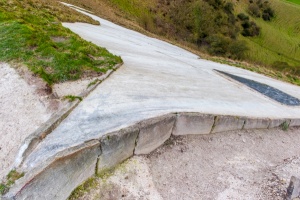 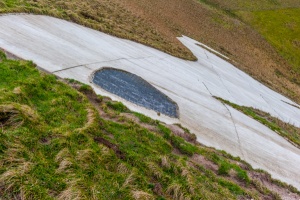 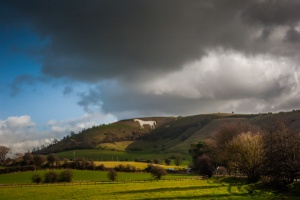 Stormy skies over the White Horse