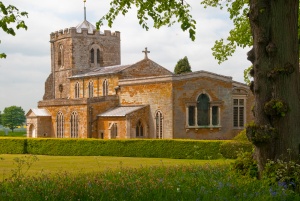 All Saints church stands almost directly opposite the historic house of Lamport Hall, home of the Isham family for over 400 years. Indeed, the main interest here is a series of memorials to members of the Isham family, which cover the gamut from subdued to grandiose.

All Saints (sometimes referred to as All Hallows) dates to the 12th century, with additions in the 13th century and major alterations in the 17th-19th centuries. It is built of limestone ashlar and lias stone beneath a lead roof.

The design is traditional, with a west tower, nave with aisle, chancel, and south chapel. Beginning in 1737 a major rebuilding under William Smith of Warwick introduced classical pilasters and an Italianate east window. 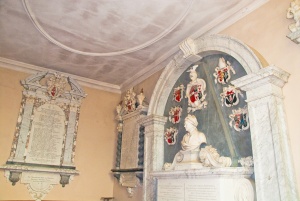 Much of the church interior is the work of Sir Justinian Isham, the 2nd Baronet of Lamport Hall, who built the chancel in 1652 and 20 years later had a chapel tacked onto the north side of the chancel as a place of burial for members of the Isham family.

Sir Justinian's great-grandson, another Justinian, travelled extensively in Italy and was heavily influenced by the classical architecture he saw there. When Sir Justinian died in 1736 he left money in his will to remodel the 17th-century interiors in Italianate style. The result is elegant without being overpowering, though it does overshadow the medieval bits of All Saints. 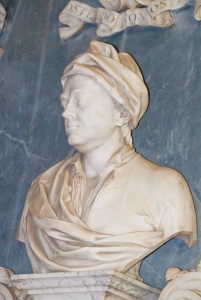 The most ornate of the Isham tombs in the chancel is that of Sir Justinian, the 5th baronet (d. 1736), with a large bust of the deceased rather overwhelming the rest of the memorial. There are wall tablets to John Isham (d. 1746) and a 19th century Isham who served as rector here.

Other features include a delicate Georgian plastered ceiling in the nave, created by John Woolston. This has three large roundels, the centre one depicting an 'eye of God' with doves. Over the chancel arch is a royal coat of arms to George II, also in plaster. The pulpit is 18th century, and the font has a wooden cover design by Victorian architect GF Bodley.

I would call All Saints an interesting rather than a compelling historic church. The Isham memorials are well worth a look, though, and if you enjoy Georgian and Italianate church architecture then you will enjoy Lamport's church. To the best of my knowledge, the church is usually locked. I visited on a day when Lamport Hall was open and a key was available at the Hall. 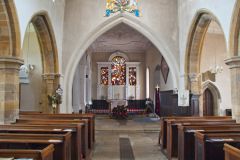 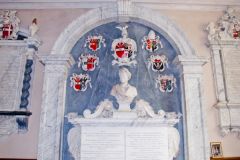 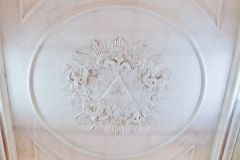 More self catering near Lamport

The Granary at Fawsley - 16.7 miles
Daventry, Northamptonshire
Stay from: £50.00

More bed and breakfasts near Lamport