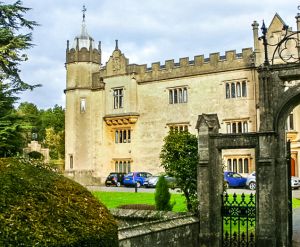 Llantarnam Abbey
A Cistercian house founded in 1179 as a daughter house of Strata Florida. The remains of that abbey are incorporated into the present buildings housing the Sisters of Saint Joseph. The fine barn, boasting 11 bays, is one of the finest medieval remnants.

When the abbey was dissolved at the Reformation the property was sold to William Morgan, an ardent Catholic. Morgan converted the monastic buildings for use as a family home. He also had to pay regular fines for not going to Anglican church services. The amounts of fines piled up, so Morgan finally paid a large lump sum to become exempt from future fines.

In the 17th century a Morgan descendent added a new house in the abbey grounds. The Morgans also helped Jesuit priests return to Britain, and hid them from the authorities. In 1679 one of the priests, David Lewis, was captured just outside the Abbey and executed in Usk. Lewis is remembered as one of the 40 Martyrs of England and Wales, men and women executed for their religious beliefs between 1535-1679.

The Abbey passed through several hands - including the government's - until 1946 when it was purchased by the Sisters of St Joseph. It is now home to a community of sisters, which seems somehow appropriate, as if the abbey has come full circle from its origins as a religious community and has now returned to its roots.

Parts of the original 12th century abbey and the 16th century house built by William Morgan are incorporated into the current house. Surrounding the abbey house is parkland laid out in the 19th century on the site of a medieval park.

In the grounds are a medieval tithe barn, and just to the west is the church, formerly a chapel associated with the abbey. There is a walled garden, complete with a labyrinth.

Visitors are welcome to visit the chapel at any time for quiet contemplation. The abbey itself is not usually open to visitors.

More self catering near Llantarnam Abbey >>