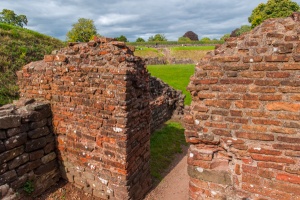 The Roman amphitheatre at Caerleon

In 74 AD the II Augusta Legion founded a fort at Isca, in what is now Caerleon. The fort was built in the territory of the most powerful tribe in southern Wales, the Silures. Establishing the fort here was a statement of power by the Romans, who were still wary of the local tribes after the threat of Boudicca's rebellion in 60 AD.

The legion was stationed here until the late 3rd century, when it may have moved to Richborough in Kent. The name Isca lives on in the name of the town of Usk, and the River Usk that runs past the Caerleon site.

Located just a stone's throw from the National Roman Legion Museum on the High Street are the remains of the bath s established for the soldiers of the 2nd Legion.

Think of the baths at Caerleon like a leisure centre built for the 2nd Legion. Within this complex were chambers for hot and cold baths, exercise rooms, and an open-air swimming pool. There were even heated changing rooms, warmed by an underfloor heating system. The baths were in use from around 74 AD to 287 AD. One unusual find from the site was a large number of gemstones discovered in the drains under the baths.

Presumably, these gemstones were dropped by bathers in the pools. At one side of the natatio, or swimming pool area, is a clay tile with the imprint of a foot; presumably, someone who steeped on the tile before it had hardened, and left the imprint of their boot in the soft clay.

Nearby is another tile showing the imprint of a dog's paw. One of the interesting items on display at the Baths museum is two sections of lead pipe used to bring water to the site. There is also an extremely fine section of a mosaic showing part of an animal, and an exposed area of the hypocaust. 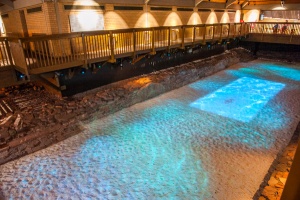 The natatio, or swimming pool 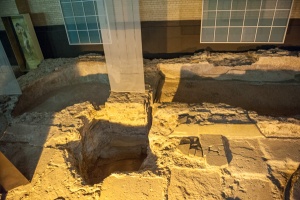 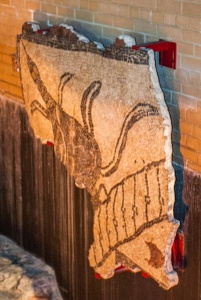 A section of mosaic

A short walk from the barracks and just outside the town walls, stand the remains of the Caerleon Amphitheatre, where soldiers and citizens of Isca came to relax and enjoy entertainment like animal hunts and gladiators in combat.

The amphitheatre is huge, with sloped banks for seating over 6000 spectators, and was erected around 90 AD. The building of the amphitheatre outside the fort walls shows that this area of South Wales must have been fully under Roman control, only 16 years after the fort was built.

The amphitheatre was not used solely for blood-sports; it was also used by the military as a parade ground. Running along the field boundary to the north of the amphitheatre is a very well-preserved section of the original fort wall.

The amphitheatre is oval, broken up into 8 sections by passage between the high banks of seating. It is 184 feet long and 136 feet wide and there were two processional ways, one at each long end. Halfway along the oval on each side were seats of honour for dignitaries, equivalent to modern box seats.

Below these were small chambers where the humans, or animals, waited to enter the arena. One of these lower chambers has a small niche set into the wall, presumably for a shrine to the godes Nemesis, who controlled fate and divine vengeance.

This really is quite an impressive site; the scale of the seating shows how popular the entertainments were; the total number of seats was more than the number of men serving in the 2nd Legion. You can walk out into the centre of the arena floor and look up ant the sloping stands, and imagine what it would be like to be a gladiator, with 6000 people watching you. It is quite a staggering sensation.

During the Middle Ages, the amphitheatre was known as King Arthur's Round Table. 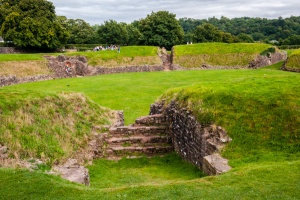 Entrance to the amphitheatre 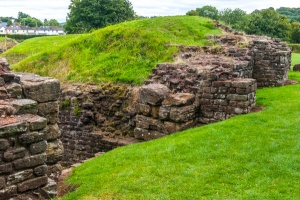 Part of the raised seating area 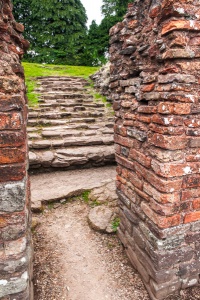 Passage from the
arena floor

About five minutes walk from the baths is the remains of the soldier's barracks. The barrack at Caerleon is the only complete barrack in Europe open to the public. This large site held 3 blocks of barracks, and the foundation walls make out easy to make out the layout of the site.

Eight soldiers shared a room for sleeping linked to a room for storing their gear. The size of the rooms is remarkably small by modern standards. Near the barrack buildings were communal toilets, and at one end of the complex you can see the remains of a bread oven.

You can also see remains of the fortress walls, a gate and corner turret, cookhouses, and latrine drains. The site is well signposted from Broadway, near the Amphitheatre, but there are no information panels at the site to help you understand what you are looking at. That's a real shame, as the barracks are quite impressive, and it would be really useful to have a way to understand what the different buildings were used for. 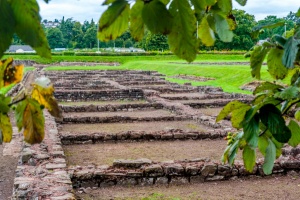 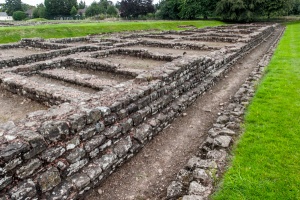 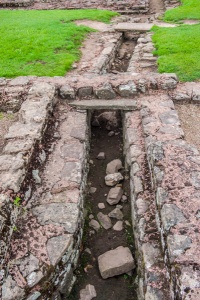 Caerleon is very well signposted from surrounding roads. There is paid parking on High Street beside the Roman Bath Museum, and free parking on Broadway, near the Amphitheatre and Barracks. Don't miss the National Roman Legion Museum, also on High Street.

To say that the Roman remains at Caerleon are impressive is a massive understatement. The amphitheatre is the best I have ever seen; the sheer size of the site is awe-inspiring. The barracks are quite impressive, too, and the baths museum provides a fascinating glimpse into leisure time in the Roman fortress. Highly recommended! 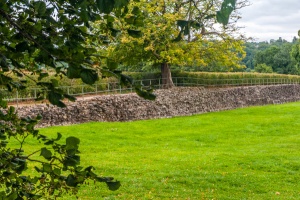 Fort walls near the amphitheatre 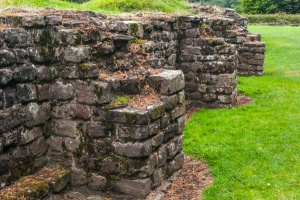 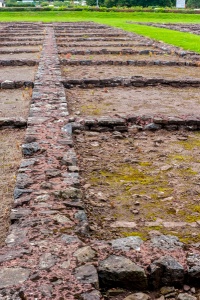