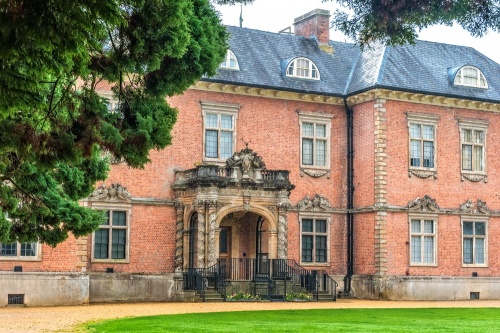 The imposing mansion of Tredegar House is one of the most historically important 17th-century houses in Britain, home of the Morgan family for over 500 years. The Morgans came to south Wales in the early 15th century, and within 100 years had amassed enough money to build a sizeable country house at Tredegar.

The south-west wing of the current building is all that remains of this 16th century mansion. By the late 17th century the family was doing well enough to enlarge the house several times, but that extravagance was nothing compared to what was to come.

A Family of Wealth

The Morgans invested heavily in the burgeoning coal and iron industry that was to transform southern Wales. They also had interests in canals and, later, railways, and were involved in developing Newport as a major port and industrial centre. The result of all this commercial activity was immense wealth, and with that wealth, came a lavish lifestyle.

In the early 1900s the Morgans lived in a brilliant social whirl, with the great and the good of high society flocking to Tredegar. They welcomed such diverse personalities as HG Wells and black magic practitioner Aleister Crowley to Tredegar. But it was a lifestyle that could not last. 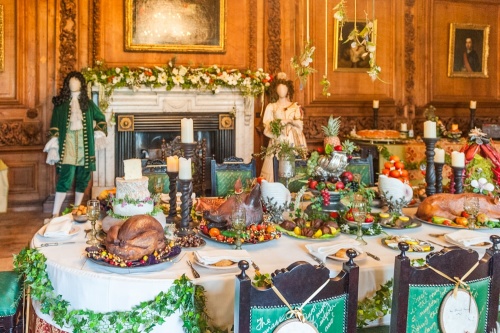 The End of an Era

When the 4th Viscount Tredegar died in 1949 and the estate was broken up. The house became a girls' boarding school, and then in 1974 it was purchased by Newport Borough Council. Reports at the time called it 'little more than a decaying shell'.

Over the intervening years the 'shell' has been restored to something approaching its former glory, with some of the original furnishings repurchased and returned to the house, and others replaced. The New Parlour is furnished in Victorian style as a dining room.

In the New Hall is an assortment of 17th century portraits of kings and queens. The carvings in the Brown Room include strange beasts, foliage and faces. The bedchamber contains a 1720's bed, and there is a below-stairs exhibition with a kitchen, stillroom, housekeeper's room and servants' hall. 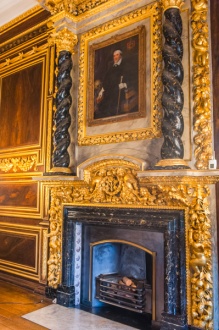 Stunning gilding in
the drawing room 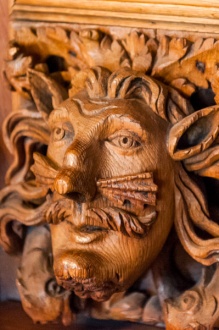 Likeness of Charles I
in the New Parlour

What a friendly house! Our family visited on a dismal, rainy day in mid-August - and had a wonderful time. I've seldom visited an historic house with more friendly, helpful guides. I learned so much about the Morgan family of Tredegar that I felt like an old family friend by the end of our house tour.

There's a wonderful mix of rooms at Tredegar, and you move with effortless ease from the 17th century to the Victorian era, from Edwardian house-party splendour to a 20th century schoolroom with peeling wallpaper. The 'below-stairs' rooms are wonderful, giving you a real sense of how the servants of Tredegar kept the house going in the Victorian period.

The really impressive rooms at Tredegar for me were the first two; the New Parlour dining room, set for a Victorian wedding breakfast, and the absolutely stunning gilded drawing room. Take time in the dining room to find the carved head of Charles I beside the fireplace, made to look like a mouse!

In the grounds is a modern stone circle, built when Tredegar hosted the national Eisteddfodd in 1988.

Garden: Over 90 acres of parkland and garden surround the 17th century mansion of Tredegar House. Close to the house is an 18th century walled garden. 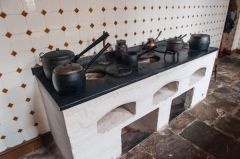 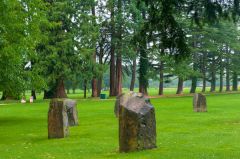 More self catering near Tredegar House >>