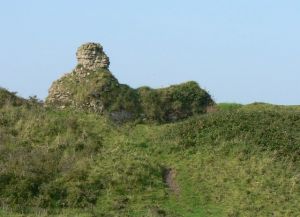 Kenfig Castle
Rubble footings in sand are all that remain of a 12th century castle with a curtain, hall, and keep. The first castle at Kenfig was built around 1140 as a wooden structure on top of a high mound, surrounded by a moat. The town of Kenfig stood beside the castle, and was itself defended by an outer moat and bailey.
The strategic importance of Kenfig is emphasized by the fact that the Welsh attacked the Norman castle on at least nine separate occasions between 1167 and 1405. The most obvious surviving part of the castle is the stone keep, a square tower about 45 feet square with substantial walls up to 11 feet thick. The tower probably rose to about 60 feet high, if we can estimate based on the remaining structure. It was built partly with reused Roman bricks, tiles, and concrete.

The inner ward is about 37 metres across and is surrounded by a deep moat that is 18 metres wide. The moat was fed by diverting the course of the nearby river, and was crossed by a wooden drawbridge.

What makes Kenfig unusual is the scale of its outer ward. This covered an area of between eight to eleven acres. Much of this space would have been filled with the original town, but by 1154 the town had been moved to a new location outside the south wall of the bailey.

More self catering near Kenfig Castle >>