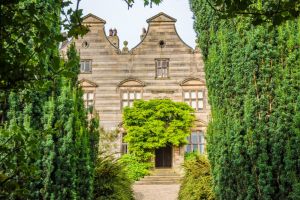 Moulton Hall is an attractive Grade I listed country house, dating to about 1650. The house features a lovely carved wooden staircase.

Though the house we see today dates to the mid-17th century, it is built on the foundations of a much older house. The builder was Leonard Smithson, who died around the time the house was finished. It was sold to the Milbanke family in 1692.

The Hall is built of ashlar and rubble, with a slate roof. It is built on a very simple rectangular plan, with neo-classical pillars and Flemish gables. The main staircase is of oak, richly carved with panels instead of balusters, decorated with roses, pomegranates, and foliage motifs.

On the stair is a coat of arms commemorating George Smithson's marriage in 1653. The staircase rises in eight flights from the ground floor to the top of the house. There are carved ashlar fireplaces on both the ground floor and the first floor.

Family tradition suggests that James I spent a night at Moulton Hall in 1603 on his way south from Scotland to claim the English throne. However, the reference story might equally well refer to nearby Moulton Manor!

You can still catch a glimpse of the house from the nearby lane, and get a good look at the striking Flemish-style exterior gables that dominate the house exterior.

Finding the Hall is a bit of a chore. There are no obvious signs, and the official postcode directed our satnav to the wrong place in Moulton village. As we eventually discovered, you need to take the unnamed lane south from the village centre towards Moulton Hall Farm.

This will lead you directly past the drive to Moulton Hall, identified by an unobtrusive National Trust sign. If you continue on towards the farm, across a cattle grid, you will come to an open space where you can get a decent look at the house from the south-west. Be aware that there is no parking area along the lane, so you'll have to pull off onto the verge.

UPDATE
The Hall is no longer listed on the National Trust website. We'll keep an eye on this situation but it would seem that the Trust is no longer helping arrange visits. 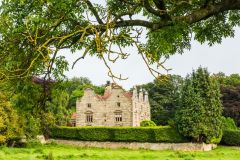 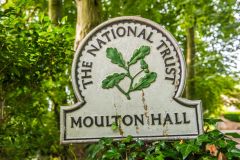 More self catering near Moulton Hall >>