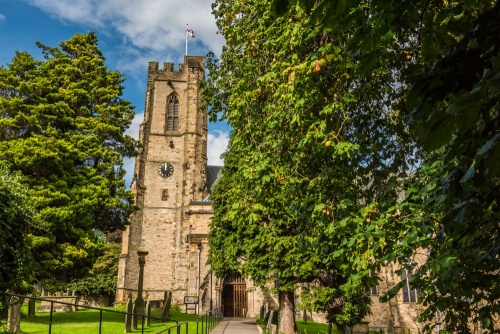 There has been a church in Richmond since at least the 12th century, but the earliest written record of a church comes from a charter written around 1125 referring to links between the Benedictine abbey of St Mary in York and Holy Trinity Chapel in the market place, then serving as a chapel for Richmond Castle.

The north porch is 14th-century work as are the sedilia and piscina in the chancel. In the vaulting of the porch ceiling you can spot a Green Man carving; a wild man of the woods with foliage issuing from his mouth. 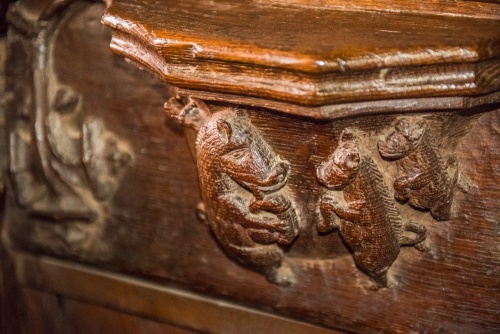 The striking west tower dates to 1399 and was begun by the Earl of Westmorland. Installed at the same time was the octagonal font, carved from Teesdale marble and decorated with heraldic shields.

The font is topped by a beautifully crafted 15th-century wooden cover. The font was thrown out by Puritans during the Commonwealth but brought back into the church when the monarchy was restored in 1660.

The entire church was rebuilt in the late 15th century, however, the building as we see it today owes much to a comprehensive restoration by the famous Victorian architect Sir George Gilbert Scott from 1858-1859.

The pews are Victorian, with ends decorated with quatrefoil carvings. The pulpit is by the famous Thompson 'Mouseman' studio of Kilburn. Most of the choir stalls are 19th century but the rear row date to 1511 and were salvaged from Easby Abbey when the abbey was suppressed by Henry VIII. 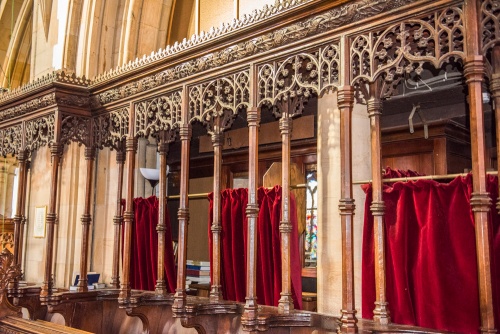 The Easby choir seats boast 16 misericords carved with diverse figures such as foliage, animals and human heads. The most famous misericord depicts a pig playing the bagpipes. There is a similar misericord carving in Ripon Cathedral and at Beverley Minster. Around the canopy above the stalls is a Latin inscription that translates as:

'There are ten kinds of mischief in the cloister - extravagant living; exquisite food; gossip in church; quarrelling amongst the clergy; disorderliness in the choir; idle students; disobedience in the young; complacency in the old; obstinacy amongst the religious and worldliness amongst ministers'.

The most important historical memorial is a wall monument in the chancel commemorating Timothy Hutton (d 1629) and his wife Elizabeth. The couple is shown kneeling at prayer, a typical 17th-century pose. Below them are figures of eight children and four more infants in swaddling.

The swaddling traditionally represented children that died in infancy, a poignant reminder of the high mortality rates at that time. Each of the 12 children has its own coat of arms and inscription.

Much of the stained glass dates to Scott's restoration. 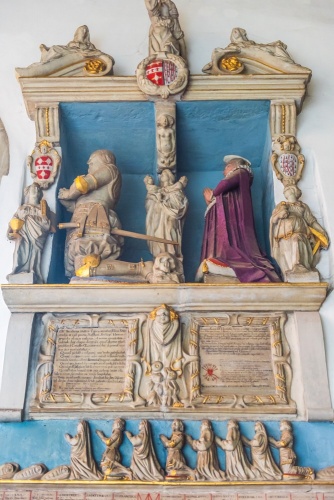 In the south aisle is a plaque commemorating John Laird Mair, 1st Lord Lawrence of the Punjab. Mair was born in Richmond in 1811.

Another highlight is the Green Howards Chapel, created in 1932. The regimental museum is in the market place just a few minutes stroll from the church. All the chapel furnishings are by the Thompson of Kilburn studio - look out for carved mice!

In the south wall are a 13th-century sedilia and piscina as well as an aumbry of the same date. On the wall are fragments of a 15th-century mural.

The east window dates to about 1450, though the glass is Victorian.

In the north aisle is a large painting entitled 'Christ before Pilate', dated to the late 16th century. It was originally attributed to Jacopo Chimenti (1554-1646) but this attribution has been discredited. 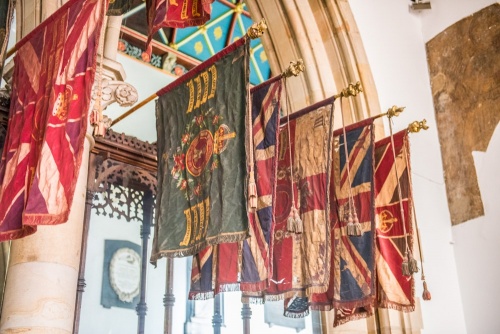 Outside the north porch is the grave slab of a 14th-century cleric. Look for the chalice symbol carved in its surface. The grave slab came from the Hospital of St Nicholas which stood on the Easby Road. A similar medieval grave slab is in the south porch.

Also in the graveyard is a broken slab said to mark the grave o Robert Willance (d 1616). Willance is famous locally for an episode in 1606 when he tried to jump his horse across a gorge known now as Willance's Leap. He broke his leg in the attempt and only survived because he slit his dead horse's body open and put his leg inside to keep it warm while waiting for rescue. He lost the leg but survived.

The leg was buried here in the churchyard in 1606, to be joined later by Willance's entire body when he died a decade later. Willance's house in nearby Frenchgate still stands.

Near Willance's Grave is The Plague Stone, an unmarked gravestone marking the burial place of some 1,000 residents of Richmond - nearly half the town's population - who died in an outbreak of the plague in the late 16th century.

Richmond Grammar School began here in St Mary's churchyard in the 14th century before it was re-established two centuries later. One pupil was Charles Dodgson, who gained fame under his pen name, Lewis Carroll.

St Mary's stands immediately beside Station Road, the main road north from Easby, just after you cross the River Swale. There is a paid parking area on Station Road. The church is only a few minutes stroll from the east side of the market place. 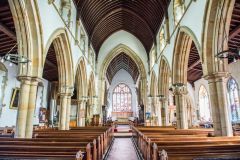 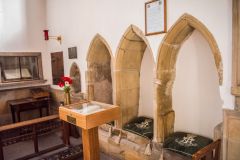 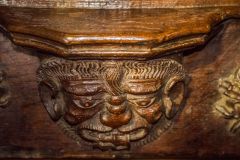 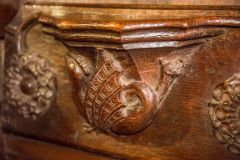