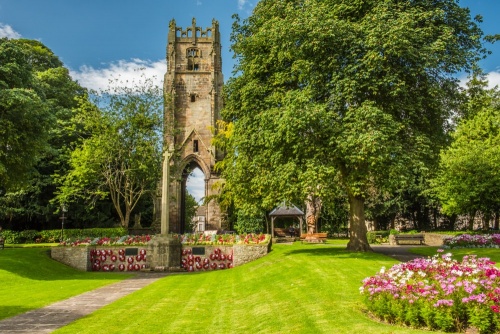 In 1258 Ralph fitz Randal, Lord of Middleham, gave land in Richmond for a Franciscan friary. The Franciscan order was known as the Grey Friars due to the colour of their robes. The friars built a timber church, later rebuilt in stone. Fitz Randal's heart is said to be buried in the choir of the friary church.

Unlike monastic orders like the Cistercians, who established their monasteries in remote locations to encourage a life of contemplation and withdrawal from society, the Franciscan Greyfriars established their friaries in centres of population where they took an active role in community life.

The friars relied on donations from benefactors and on begging for their maintenance. They preached to the local residents and ministered to their needs. In general, they were well-supported and were popular for the humility and their vows of poverty. 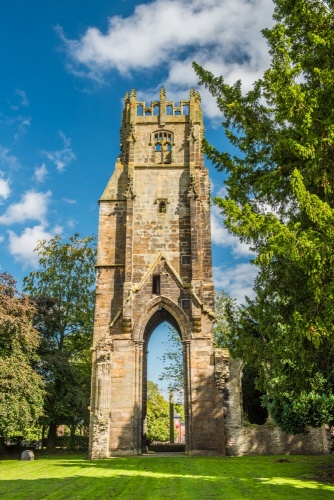 The Tower from the west

At some point prior to 1386, the friary came under the patronage of the powerful Scrope family. According to court documents submitted during a lawsuit in that year, the friary's stained glass windows displayed the Scrope family arms.

The friary followed a traditional layout with monastic buildings around a cloister on the north side of the church. According to friary records, in 1386 these buildings included a guesthouse, dorter (friars' dormitory), frater (the refectory where they dined), a parlour, washing area, warden's house, and 'the studies' a room used for teaching.

The friary also had a system of clean, running water which was extended to the townsfolk outside the friary. Supplying clean water to Richmond certainly did not hurt the Greyfriar's popularity!

That popularity was evidenced when in 1313 a town wall was built to protect Richmond from Scottish raiders. The wall was pierced by a postern gate which gave direct access from the market place to the friary via the alley that is now known as Friars Wynd. 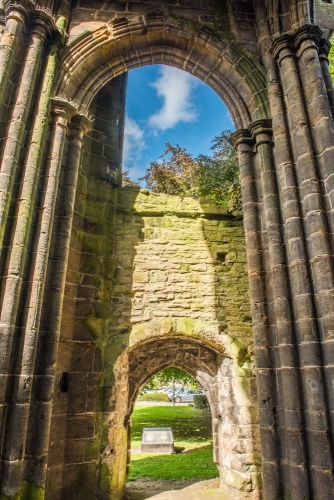 Looking north through the Tower arches

The church was enlarged in the 14th century with the addition of a south aisle and a 'great cloister' to the north of the church. Here historians have found remains of an infirmary with its own cloister.

South of the friary church was a burial ground. Excavations reveal that both friars and lay people were buried here.

The expansion of the church and friary grounds makes it clear that the friars were popular with donors. Unfortunately, enlarging the church and receiving money from patrons did not align with the Franciscan ideals of poverty. The chronicler Matthew Paris compared the ornate friary buildings to royal palaces.

It is no surprise that by the 16th century the friars had lost their initial public support and most people were only too glad to support Henry VIII's Dissolution of the Monasteries. 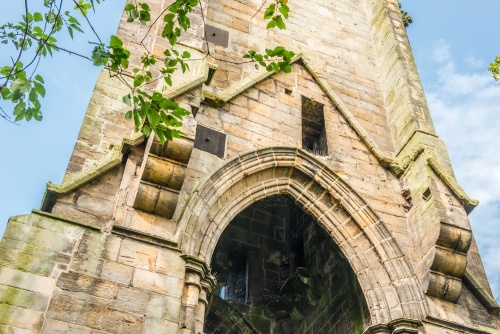 Detail of the Tower arches

Greyfriars was suppressed by Henry VIII in 1538 and stone from the monastic buildings were robbed for nearby building projects. By that time the friary had already shrunk to a third of its 14th-century size; only 13 priests remained under a warden.

The friary land passed through the hands of private owners until 1888 when part of the grounds was used for Richmond School. The school buildings still incorporate parts of the medieval and Elizabethan structures. The Headmaster's Lodge appears to incorporate medieval walls.

The only remaining feature of Greyfriars is the church tower, which stands in a pretty public park known as Friary Gardens, just a short stroll from Richmond's historic market place.

The tower is remarkably intact and still stands to its full height. It is pierced by a pair of high moulded arches and above each arch is a window with Perpendicular tracery. Sections of the wall supporting the tower include a double-pointed window arch and a six-foot section of the north chancel wall.