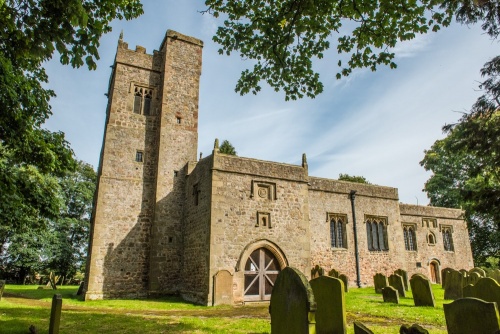 The church of St Mary at South Cowton stands alone in a field, at the end of a farm lane. It was built in the years 1450-1470 by Sir Richard Conyers, whose late 15th-century tower house of South Cowton Castle can be reached by a footpath to the south-east. The church consists of a nave, west tower, chancel, two-storey south porch and a vestry.

On the west face of the tower are heraldic arms showing the symbols of Sir Richard Conyers impaling the arms of his wife Alice Wycliffe. Over the porch is a carved verse asking visitors to pray for the couple.

The appearance of the church suggests that it was built at least partly with defence in mind - not a bad idea given the turmoil of 15th-century England. The interior is a late medieval delight and has hardly changed at all since 1450. Highlights include a nicely carved rood screen and choir stalls. There is a lovely old timber roof, and surviving wall paintings. The barrel-vaulted south porch has a chamber above the entrance for use of the priest. 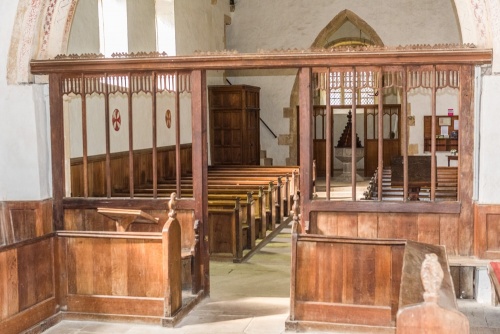 The east window stained glass dates to the 15th century and contains a dedication to Christopher Conyers. The south and north stained-glass windows are by the Victorian firm of Clayton and Bell.

The font dates to around 1620 and has a finely carved wooden cover. The underside of the chancel arch has beautiful geometric paintings that may date to the late medieval period. On the wall is a funeral hatchment to Richard Arden, 3rd Lord Alvanley, who died in 1857.

One curiosity is an 18th-century funerary helmet carved from wood and mounted on a bracket on the chancel wall. With the crested helmet is a gauntlet, also carved from wood.

On the wall is a memorial to Augustus Webb, a captain in the 17th Lancers. Captain Webb died at the hospital at Scutari, Turkey, days after being seriously wounded in the famous Charge of the Light Brigade during the Battle of Balaclava. The Scutari hospital was later made famous as the place where Florence Nightingale helped transform medical care for wounded soldiers, but her efforts did not come soon enough for Captain Webb.

The major historic interest at South Cowton is provided by three medieval alabaster effigies in the chancel. These have some wonderful carving and clearly depict medieval costume detail. One figure is that of a knight, probably Sir Richard Conyers (d. 1502) or possibly Sir Richard Boynton (d. 1485). The identification with Conyers seems likely on stylistic grounds but also because he is known to have had a chantry chapel in the church. 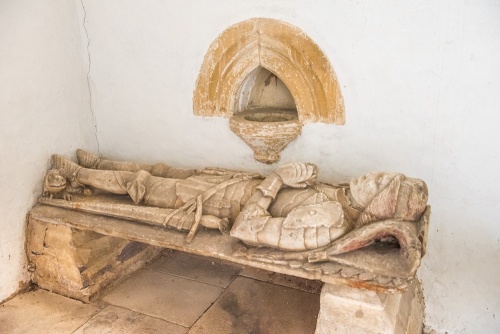 The other two effigies are women, probably the two wives of Sir Richard Conyers. If that is the case then we know the name of one for certain; Alice Wycliffe, whose coat of arms is on the tower exterior. It is possible that the second effigy may not be Sir Richard's second wife but his daughter Eleanor.

Another item of interest is a peculiar carving on one of the choir stalls. This is two-faced, with a head looking each direction.

An interesting story attaches to the name of South Cowton. The term 'Cowton' may derive from Old English for 'cow farm'. A local legend says that the monks carrying St Cuthbert's bones from the threat of Danish raids rested here. The monks were guided to their final stopping place at Durham by following a cow.

St Mary's church is no longer in active use and is cared for by the Churches Conservation Trust, but it is well worth a visit. There is no village - that was demolished and the inhabitants evicted by Sir Richard Conyers so the land could be used for pasture.

St Mary's is not the easiest church to find! We set out satnav for the official postcode of DL7 0JB but that took us to the Arden Arms pub in Atley Hill. As we eventually discovered, you need to carry on north from the pub, along the B1263 in the direction of North Cowton. After a few hundred yards you come to a farm drive on your right leading to Atley Fields. It isn't obvious, but there is a sign to the church beside the drive, though when we visited it was so hidden by shrubs that it was impossible to see.

It also isn't obvious, but you don't have to park at the entrance to the farm drive. You can carry on up the drive, past a cluster of houses and a farmyard, until you come to the church. There is a small parking area beside the churchyard.

From the edge of the churchyard, you can clearly see Cowton Castle across the farm field to the south-east. A footpath goes across the field and passes fairly close to the castle, but the castle itself is on private property with no access. You can get a reasonably good look from the churchyard, however. 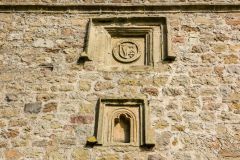 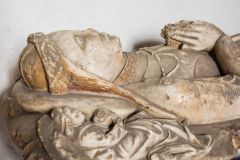 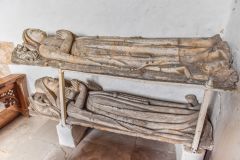 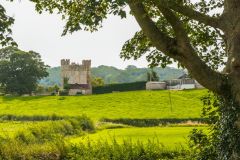