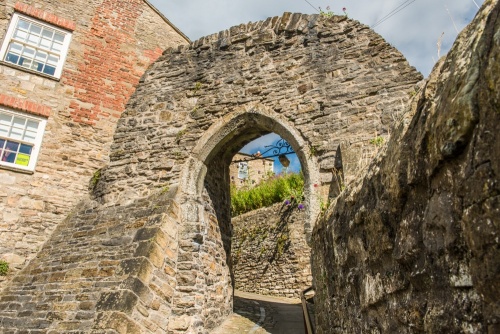 In the early 14th century tensions between England and Scotland were running high. Edward I's attempts to seize the throne of Scotland ended when he died within sight of the Scottish border in 1307. His son, Edward II, tried vainly to assert control over Scotland but he was met with resistance by the Scottish leader Robert Bruce.

Rather than wait inside Scotland for Edward's next military action Bruce took the fight to his enemy, raiding deep into England.

Though Bruce and the Scots never attacked the town of Richmond, the threat of an attack was very real. Richmond applied for and received permission to encircle the outer bailey of Richmond Castle with a stone wall.

The wall was built around 1312, replacing an earlier earthen bank. The population of Richmond moved inside the wall to the bailey area, which occupied the space where the town's market square now stands. 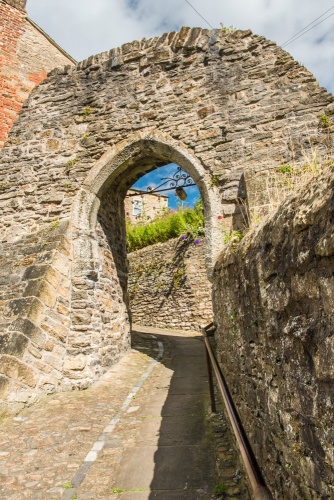 The wall enclosed an area of 18 acres (7.2ha), though at least half of that enclosure was taken up by Richmond Castle.

The ongoing threat of Scottish raids throughout the 14th century meant that the walls and the gate needed constant attention. Grants to repair the wall were awarded in 1337 and again in 1341.

The 14th-century town wall had four main entrance gates, each given the common name of a Bar. There was a Bar on French Gate Street, another on Finkle Street and the third on Cornforth Hill. There was a fourth gate in the south at Millgate and a pedestrian gate in the north, known as the Postern Gate, allowing access to the Franciscan friary outside the wall at what is now Friary Gardens.

Over the medieval period, the threat of Scottish raids decreased and the town wall was allowed to fall into disrepair. By the 1540s it was falling apart.

The gates at Millgate, Finkle Street and French Gate Street were removed in 1773 to ease traffic flow. 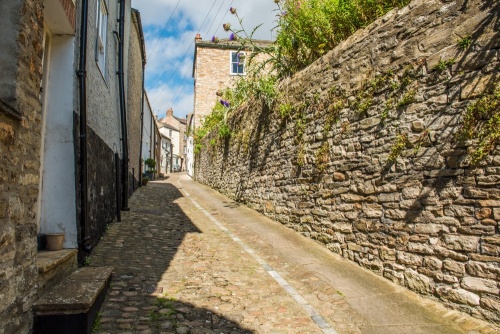 Looking up The Bar from Bargate

Only one medieval gate remains, the one on Cornforth Hill, now known simply as The Bar or Bargate. In this sense 'Bargate' is a redundant term, translating as 'gate gate'.

Bargate was built to allow passage for pedestrians and horses from the town to a settlement around a small green just outside the town's south-west corner. The green still exists at the junction of Bargate and Cravengate.

The gateway stands 6m high and stretches 8m north to south with a depth of 2.5m. In the centre is an archway about 1.8m wide. There is another archway on the western end of the opening. The western side of the gateway is supported by the thick stone buttress and the ground on either side of the central passage is cobbled.

Bargate is not imposing but it is fascinating to see a surviving 14th-century town gate in such good condition. It is a reminder of Richmond's sometimes turbulent past.

The gate stands at the junction of two pedestrian alleys. Leading off the south-west corner of the market place, just where New Road begins, is The Bar, a lane leading steeply downhill. Leading up from Bargate is Cornforth Hill, a cobbled alley. At the point where Cornforth Hill meets The Bar you pass through Bargate.

It is a matter of two minutes easy stroll to Bargate from the market place, yet most visitors to Richmond miss the gateway entirely as it is not signposted.

More self catering near Bargate, Richmond