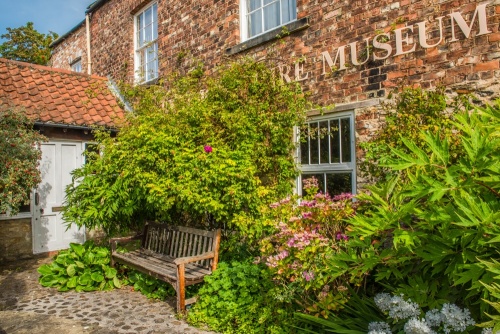 The Richmondshire Museum is a museum of local heritage occupying a historical building a short stroll from Richmond's town square. Richmondshire is an administrative district in North Yorkshire, covering a large swath of the northern Yorkshire Dales and including Swaledale and Arkengarthdale, Wensleydale and Coverdale.

The museum incorporates several historical buildings and reconstructed room settings including the Herriot Set used by the BBC in its popular production of James Heriot's 'All Creatures Great and Small'. The Herriot Set was officially opened by James Herriot (whose real name was Alf Wight) in 1984. Wight described the set as 'very authentic'.

One part of the museum covers the lead mining industry in the Yorkshire Dales into the Victorian period while another area looks at the history of transport in North Yorkshire and includes a scale model of the Richmond rail station as it appeared in 1900. See the original station plans, old railway posters and an original 19th-century pennyfarthing bicycle.

The museum also includes a reconstructed 15th-century cruck house from Ravensworth, 5 miles north of Richmond. This is thought to be the last surviving cruck-framed building in the region. When the house was threatened with demolition in the 1970s the museum had it carefully dismantled then reconstructed here piece by piece.

Cruck construction involves bending green wood to a peaked roof shape. Inside the cruck house is a nostalgic collection of domestic items.

Another exhibit houses the former village post office from Grinton in Swaledale, while yet another area recreates the grocer's shop in Richmond where John James Fenwick, founder of the Fenwick's Department Store chain, had his first job (in a shop owned by his father).

There is also a reconstructed chemist shop and ironmongers, plus exhibits covering folk history and domestic life. Learn what life was like for a Georgian child, or for evacuees escaping the perils of the city in WWII. See the 'old hoss' a Christmas character that still makes appearances at local Yuletide celebrations.

The museum holds a sizeable archive of documents and photos that can be consulted by prior arrangement. Many documents have been made available online.

There are regular displays of special interest. For example, one recent display showcased archaeological finds uncovered by local roadworks, including a Roman altar. 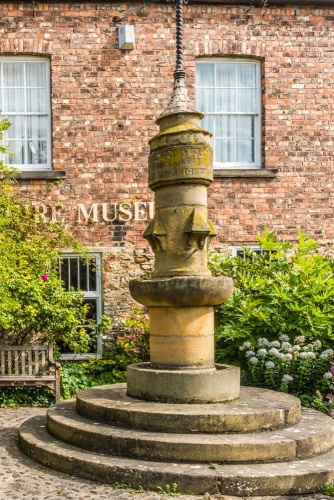 In the Discovery Centre is a recreation of Richmond's market place in the late 19th century, inspired by a depiction of the market place in a detailed oil painting by William Sanderson in 1900.

The museum was established in 1974 by the Richmond and Dales Soroptimists and opened to the public in 1978, with its collections housed in a historic joiners workshop on Ryders Wynd.

The Richmondshire Museum is operated as a charity and run entirely by volunteers.

More self catering near Richmondshire Museum