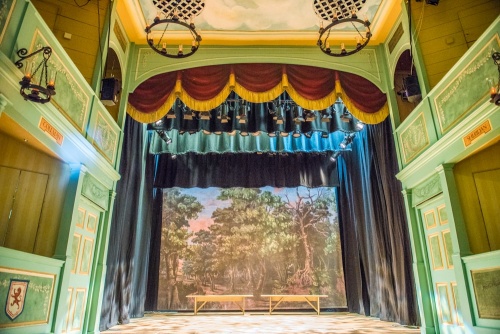 The Georgian Theatre Royal & Museum in Richmond, Yorkshire has been called 'The most beautiful British theatre you've probably never heard of' (https://www.telegraph.co.uk). It is an apt description. The Georgian Theatre is the oldest working theatre in Britain still in its original state.

In 1788 an actor-manager named Samuel Butler built a theatre just off Richmond's historic market square. Butler had a circuit of 7 other theatres across Yorkshire and Cumbria, all within 50 miles of Richmond. His acting troupe would walk, not ride to the next performance. Only the sets and costumes were hauled by horse.

Despite the hardships of running a provincial touring company Butler was able to attract some of Georgian England's leading actors and actresses including Mrs Siddons and Edmund Kean. After Butler died in 1812 his children and second wife continued to run the theatre. 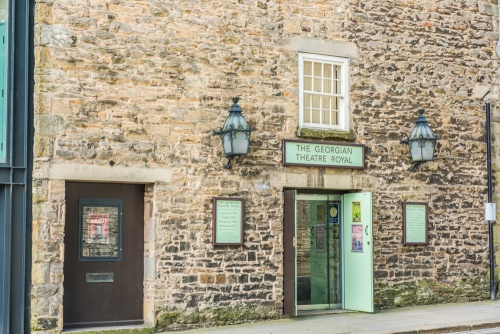 The theatre was in regular use until 1830 and continued to be used for occasional performances for another 18 years. From 1848 it was used as an auction room and wine cellars were added in the theatre's pit. It served for a time as a corn chandlers and then a furniture warehouse. During WWII it was used for storing salvage.

In 1960 a charitable trust was formed to restore the ageing building and it reopened in 1963 as a working theatre for the first time in 115 years. A small theatrical museum was added behind the stage in 1996 so that today the Georgian Theatre is both an active performance venue and a museum.

Visitors can take regular tours led by costumed guides that take in the auditorium, the 18th-century stalls, the stage and dressing rooms and the theatrical museum.

The most important historical item in the museum is the oldest set of scenery in Britain, a woodland scene painted on boards. It was probably not made specifically for the Georgian Theatre and there are no records to show how it came to be here. The woodland scene was painted between 1818 and 1836 and is now carefully preserved behind glass panels to controlled humidity.

The Georgian Theatre is a typical 18th-century country playhouse. What makes it so special is that it has remained almost completely unaltered. Luxuries that modern audiences take for granted are conspicuous by their absence. There are no padded seats here or cupholders built into the arm of your chair. Seats in the stalls are simple painted boards.

The theatre holds 214 people today, though in the Georgian period there were no health and safety requirements so many more would have been able to cram into the space then - perhaps as many as 450 people. The theatre is arranged in traditional style with boxes on three sides, a gallery above, and a sunken pit nearest the stage. No seat is further than 10.7m (35 feet) from the stage. 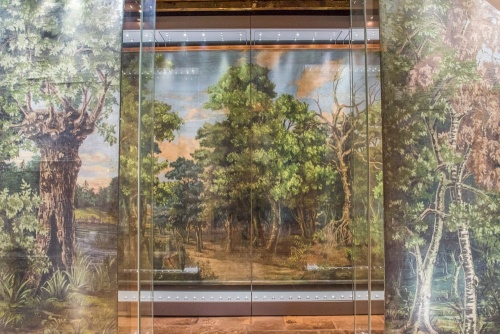 The Woodland Scene - the oldest set of scenery in Britain

The pit is reached by underground passages beneath the pit boxes. The boxes themselves are decorated with the names of popular playwrights from the 16th-18th centuries. The central box bears the name 'Shakespeare' and is the original Georgian lettering. Also original is the Richmond town coat of arms on the stage box to the actors' left.

Over the boxes is the gallery, supported on 11 slender columns in Tuscan style.

The stage is quite large - as large as the auditorium itself at 28 x 24 feet (8.5m x 7.3m). There are original Georgian trap doors in the stage floor. Under the stage is a recreated candle float mechanism. This was used to raise a set of burning candles up to stage level to serve as footlights.

The exterior of the theatre gives no hint of the amazing interior. In fact, the exterior looks like more like a barn than a theatre, but looks can be deceiving; inside the unobtrusive exterior lies a beautifully restored Georgian interior. In a few places the restoration has left the walls clear of plaster to give a view of the original 18th-century wall beneath. 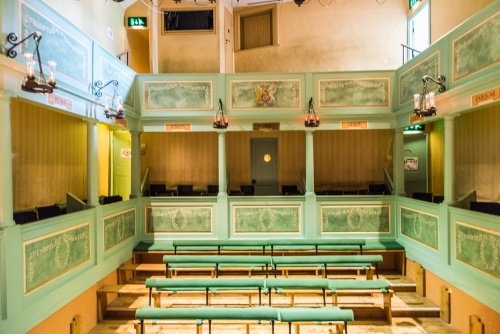 The view from the stage

The building looks tiny from the outside, measuring just 26 x 61 feet (7.9 x 18.6m). Yet it is that small size that gives it such an appeal; the audience is almost on top of the stage, creating a wonderfully intimate atmosphere.

What makes visiting the theatre so enjoyable is the insight you get into what it was like to attend a performance over 200 years ago. Theatres could be rowdy, dirty, smelly places. There were no public toilets so it would not be unusual for a theatre to have a rather 'interesting' odour.

We highly recommend taking one of the theatre tours which usually take place from February through November. We thoroughly enjoyed our visit. 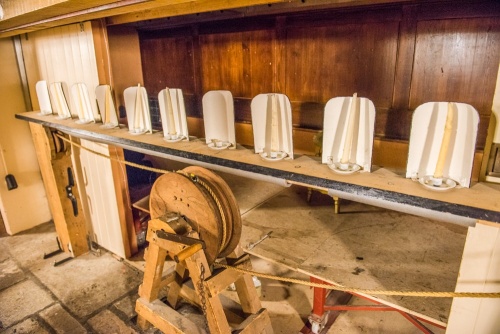 The 'candle float' footlight mechanism under the stage 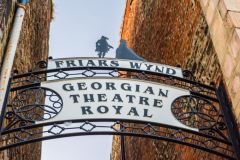 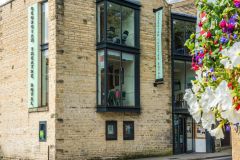 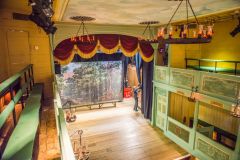 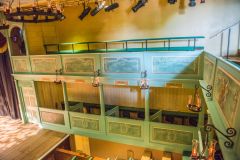 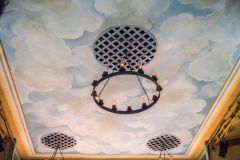 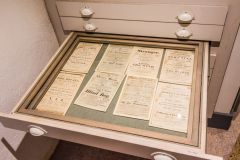