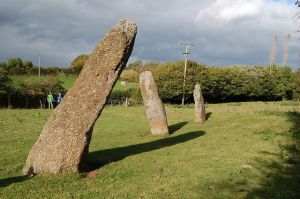 Harold's Stones - Stone Row
Three large standing stones form a row in a farm field. Local legend says the stones commemorate a victory over the Britons by King Harold, but they probably date to the early Bronze Age.
This intriguing row of three standing stones is set in a farm field close to the B4293 road between Monmouth and Chepstow. The name of the village of Trellech comes from the stone row. The Welsh word 'tre' translates as 'three' and 'llech' as a stone, so Trellech means three stones, or 'place of the three stones'. It is interesting that there was likely a fourth stone nearby, though this was destroyed in the 18th century. Another interpretation is that the stones formed part of a much larger monument, perhaps a stone circle.

Legendary Origins
The row is known as Harold's Stones after a legend that the stones mark the graves of 3 chieftains who fell in battle against the Welsh while serving under a Roman leader named Harold. Another version of the story says that the stones commemorate a victory by King Harold of Wessex, the last of the Saxon kings, who defeated the native Britons in a fierce battle here in 1063.

The only trouble with that story is that the stone row predates King Harold by several thousand years! The legend goes on to say that Harold's men were buried in a mound behind the ancient parish church, however the mound is actually a Norman castle motte built by the de Clare family in the 12th century.

Yet another story says that a legendary giant named Jack o'Kent flung the 3 stones from Skirrid mountain, 14 miles distant while playing a game with another giant. Or perhaps it was from the summit of Beacon Hill, just a mile away. And perhaps it wasn't another giant but the devil. It seems you can pick and choose which version of the story you prefer!

In 1689 a likeness of the stone row was carved on a sundial now kept inside St Nicholas church in Trellech. One side of the sundial has a carving of the stones with the Latin 'MAIOR SAXIS' greater because of the stones) and HIC FUIT VICTOR HARALDUS (here Harold was victorious).

The peculiar sundial is also inscribed with the numbers 7, 10, and 14. One theory is that these numbers tell the height of the standing stones. If so, the 17th century method of measuring was different from our own, for the stones actually stand roughly 9, 12, and 15 feet high.

The stones form a line 39 feet long, on a NE-SW axis. The most southerly stone is the largest, at 15 feet high, and bears 2 cup marks on the south face. The angle of the cup marks means they would face the midwinter sunset, though whether that is coincidental or not we simply don't know, but it does raise interesting questions over how the stone alignment was intended to be used or what it represented.

No one knows for certain when the stones were erected; estimates range from the middle Neolithic period to the early Bronze Age, around 1500 BC. There are very few similar alignments in south-east Wales, though they do occur elsewhere in the country.

The stones are located just south of Trellech village, and there is a small layby for parking on the B4293.